Questions and discussions about a throttle. The throttle is a valve that controls the amount of air that is allowed to pass into a gasoline engine (diesel engines do not have a throttle in this sense).

According to Wikipedia, in gasoline engines, the throttle is the part of the air intake system that controls the amount of air flowing into the engine – usually in response to driver accelerator pedal input.

In fuel injected engines the throttle body is usually located between the air filter box and the intake manifold, and it is usually attached to, or near, the mass airflow sensor. In carbureted engines, the throttle mechanism is usually incorporated into the carburetor.

The largest piece inside the throttle body is the throttle plate, which is a butterfly valve that regulates the airflow. 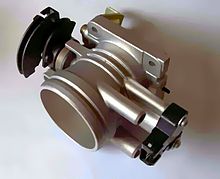 Throttle body showing throttle position sensor. The throttle cable attaches to the curved, black portion on the left. The copper-coloured coil visible next to this returns the throttle to its idle (closed) position when the pedal is released.

When the driver presses on the accelerator pedal, the throttle plate rotates within the throttle body, opening the throttle passage to allow more air into the intake manifold. Usually an airflow sensor measures this change and communicates with the ECU. The ECU then increases the amount of fuel being sent to the fuel injectors in order to obtain the desired air-fuel ratio. Often a throttle position sensor (TPS) is connected to the shaft of the throttle plate to provide the ECU with information on whether the throttle is in the idle position, wide-open throttle (WOT) position, or somewhere in between these extremes.

How come full throttle is meaning full speed instead of the opposite?

Why does a petrol engine need to maintain an air-fuel ratio, while a diesel engine doesn't?

Is there any difference between pressing the gas pedal and opening the throttle by hand?