How much oversize should you target when choosing a throttlebody?

This is in addition to my previous question about throttle bodies. I know it may sound a bit subjective, but I think it has a clear technical aspect, and I have done a considerable amount of homework.

To elaborate; I'm looking for a throttle body to replace my SU carburetors. The carburetors, have a bore of 45mm. It's obvious that you don't want a TB (throttle body) that's too small because that would restrict the airflow. You wouldn't want to go too big either, because the response would probably be really weird. If 20% throttle would give you full power already, that would be annoying. I suppose manufacturers choose a TB that is, with a little margin, just big enough to be not restricting at WOT at max rpm.

I was wondering if it would be smart to go for a bigger TB that is not restrictive anymore at WOT at max rpm, when it's only opened for say, 50 degrees. I'd set the pedal travel accordingly; pedal to the metal means throttle opened for 50 degrees from shut. Because the TB is much bigger, but opened only partially, you still have the swirl/turbulence that the throttleplate creates, while also keeping maximum manifold pressure or volumetric efficiency.

I have flow tested it in SolidWorks and you can clearly see the difference. It's a 2 litre 4 cylinder twin carb/TB. So at 6000rpm you'd get 50l/sec per TB. The ambient pressure is 1013hPa. The colour of the arrows represent the air speed in m/s.

At WOT, there's virtually no swirl, and the MAP barely differs from ambient pressure.

At 50degrees opening, there's much swirl but the MAP drops significantly.
At 50 degrees, but with 5/3rd of the volume airflow(30L/sec), you still get the swirl, while also keeping a MAP that's almost as high as ambient. 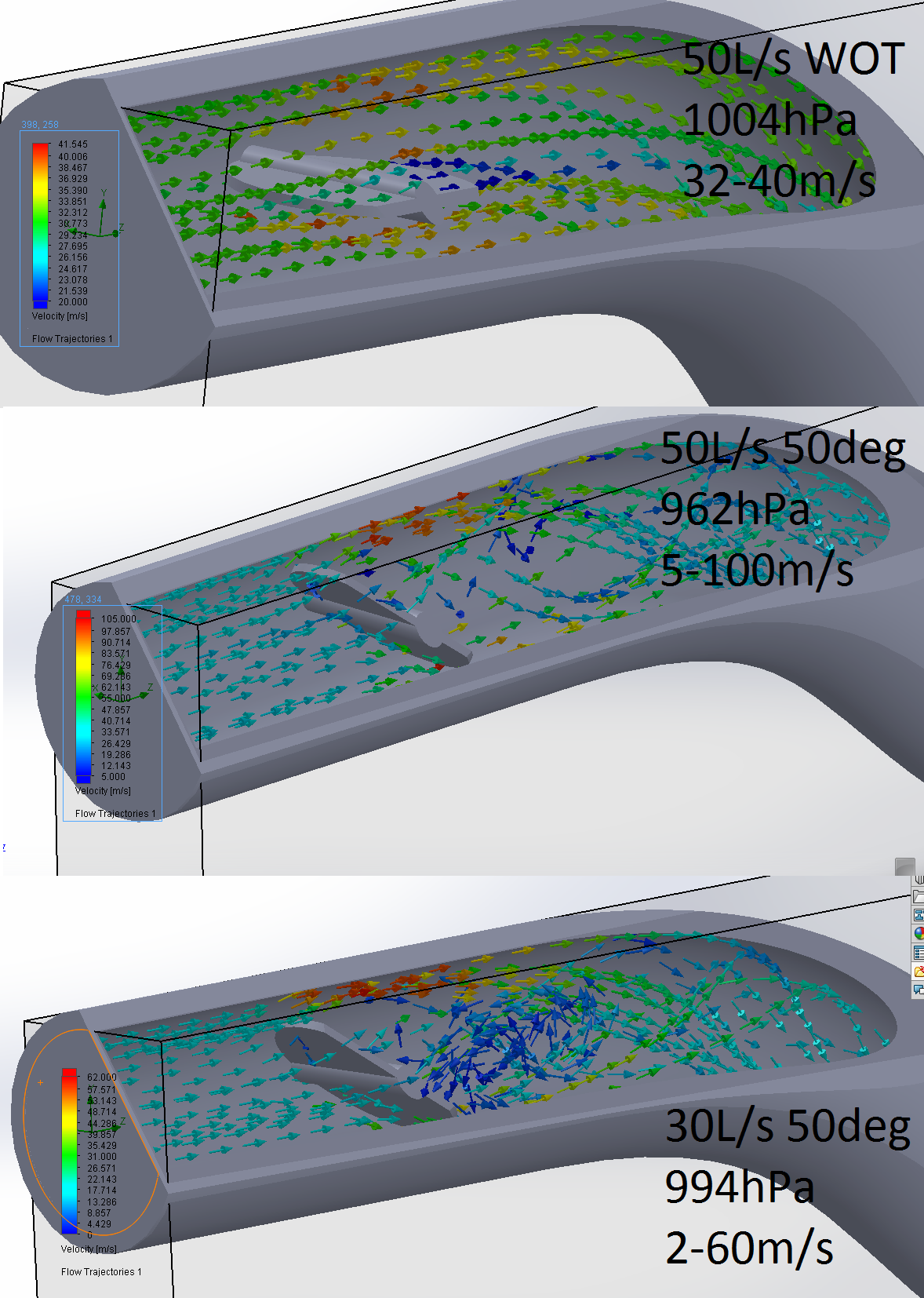 The same would be true for 50L/sec but with a bigger TB. So in my case i'd choose a 75mm TB over a 45mm one; 5/3rd bigger than normal. More swirl means better atomization, better atomization means more complete combustion, more efficiency, and more power.

I'm inclined to think there's a reason manufacturers don't do this, but I can't see a downside in this concept. Obviously one would need to make an smooth conical-like adapter to properly fit the TB to the manifold.
What do you guys think?

One of the issues is air control at very small openings. Smaller throttle bodies work better at or near idle (in general).

As for maximum performance, a key input is V.E. (volumetric efficiency). To achieve high numbers, smooth airflow is important. Smooth flow promotes high velocity flow which in turn creates momentum. So when the piston hits bottom, and is no longer drawing air, the air continues to flow into the cylinder because of the momentum on the intake track (similar to scavaging by the exhaust with piston nears TDC on exhaust stroke). So smallest opening that doesn't restrict is typically the best. Turbulence is the enemy.

Wow! Very technical. If you are turbocharged then put a bigger turbo volume to give more air or maybe just increase your boost on yours to make up for your big throttle body, then see how it goes and you can also increase your injector spray time? I think your good with the bigger throttle body and just adjust the rest if it if you have too?

12
How do you get the carburetors out of a 1983 Kawasaki KZ1000 P?
8
Motorcycle popping on acceleration
26
What actually happens when there is way too much oil in a car engine?
10
How do you plan an engine build?
6
How much horsepower to expect from a cold air intake in Dodge Ram
14
How over-square can you go?
0
What engine oil should you not mix together?
1
Honda CRV 2000 Horrible Throttle Response