I have a Lexus ES300 that has was throwing the P0330 code. Being that I had limited time to chase the problem, I took a Saturday and removed both sensors, and the wiring harness that connects to the bundle going to the ECU. This was the advice most people gave. Since the code is stated to be a short/open circuit between the sensor, indicating the sensor or wiring is bad, I checked to make sure all of my connections were good.

I picked up two knock sensors and the wiring harness from Orielly's, Import Direct. They were ~$160 a piece. I was very careful to keep the port clean (no teflon tape, or anti-seize gel), and to torque the sensor properly, compensating for the extra level arm of the crows foot.

I reset the code and drove the car for about 15 miles on the freeway, no code showed up. Two days later, I drove to work and on the way after about two miles I got P0325. Disappointed, I took a multi-meter and made sure all the connections were solid. After resetting the code, it would show back up after a mile or two, every time.

There appeared to be no electrical issue and both sensors were showing ~20mV between them and ground. In attempt to test them, I took each sensor individually and drove around while slamming on the brake. Each time I would slam the brake I would see the sensors hop up to about ~40mV and then immediately settle down to between 10-20mV. Testing with an oscilloscope showed the proper waveform from the service manual.

Since I was only receiving one code, I followed the advice of many online to splice the 'good sensor' to both connections on the ECU. Now I get P0325 after about two hours of the car running. Since I commute about an hour, it happens halfway through the way home from work. ( I reset the code when I get home) A cold start, followed by an hour of freeway driving, followed by a cold start hours later, then about 30 minutes on the rode and the code will show up.

This doesn't seem to make any sense, as both ports on the computer are seeing the same electrical signal. I should be either be seeing both P0325/P0330 or neither.

The desperation comes from working too many hours, and needing to pass smog (CA). I should mention that no other code has shown up alongside these codes and when the CEL trips, it stays on solid from the time I start the car to the time I turn it off.

Any clue as to what is happening?

Just in case anyone else runs into this situation. Do not buy aftermarket parts or what are claimed to be OEM compatible parts for your Lexus. At least not electrical signal parts.

It has been a week now and I have had no issues. Even though the electrical signals are very similar, they must be different enough that the Lexus doesn't like the Import Direct sensors. 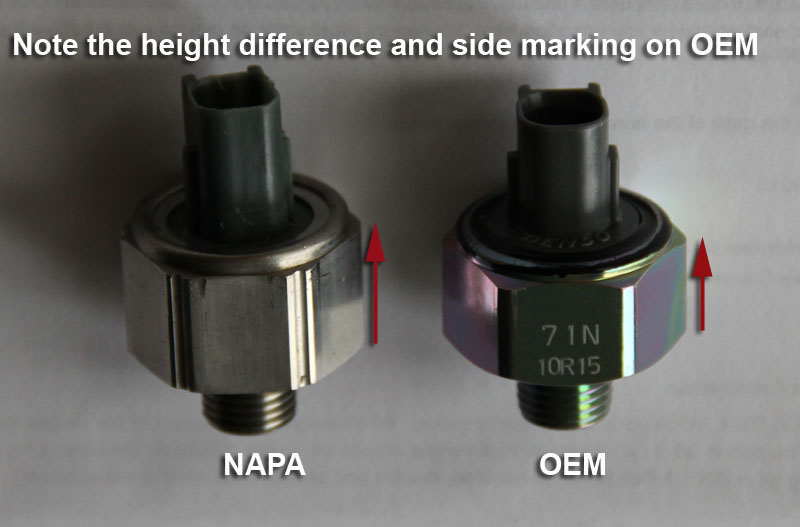 Not the answer you're looking for? Browse other questions tagged lexus knock-sensor or ask your own question.