Honda Odyssey alignment results in camber out of spec? Normal?

I splurged on an alignment after getting new tires for my 2018 Odyssey. It was done by the my Honda dealership that has done all service on the vehicle, except the recently installed Costco tires.

Looking at the report, it looks like Front Right Toe was out of spec before alignment, and in spec after. But then Rear Right Camber went from in spec to out of spec? (1.2 deg vs -1.0 deg to 0.0 deg?) 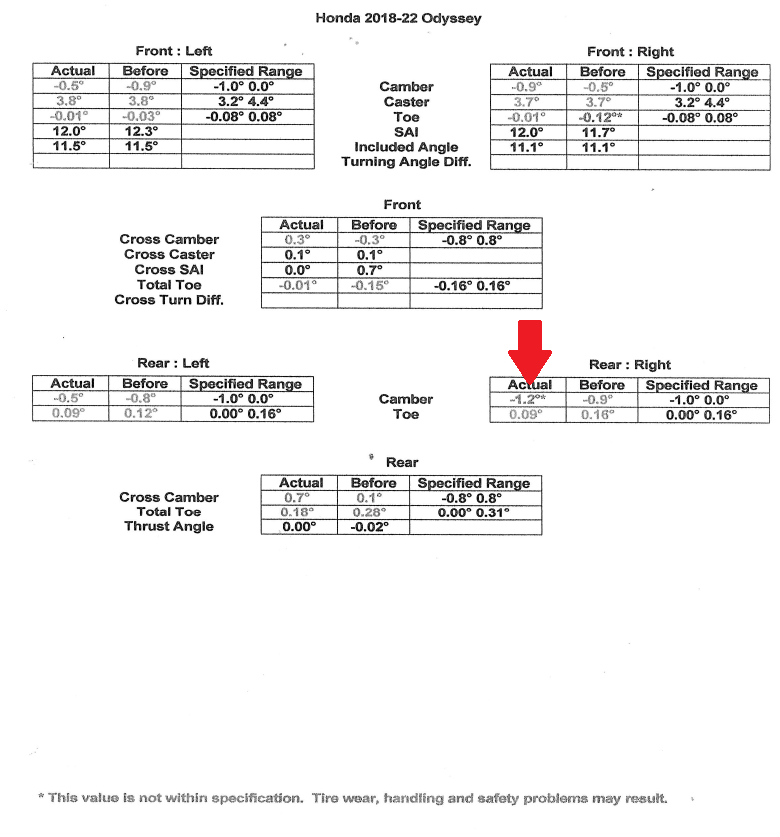 Most vehicles do not have a rear alignment adjustment. What you have is what you get. It is not uncommon for the rear alignment to go a little out of spec during an alignment procedure. Even so, looking at the report, the cross camber is within spec and the total toe became even better. You shouldn't have an issue with this alignment. The rear tires are pulled, which as the rear alignment isn't completely wonky, won't make much of a difference. If the toe was out of whack, you'd probably see a difference in fuel mileage as well as tracking issues.

The reason you might be seeing a little more camber that is there might be a little wear on the bushings which support the rear. Again, nothing to worry about.

As far as "splurging" for an alignment, it is my opinion you should ALWAYS get an alignment with fresh tires. You just laid down a fairly large chunk of change on those black donuts. Getting an alignment will help ensure they'll last longer and stay healthier throughout their lifetime. IOW: It is money well spent.

8
Wheel Alignment: Just how bad is bad?
5
Had shocks, rear axle, tires replaced - alignment still out of spec and car vibrates?
7
Alignment is out of spec a tad - should I worry?
3
Individual wheels' toes are out of range but combination is within specs
6
What reasons could justify setting the left wheel to have a different caster angle from the right wheel?
1
Which of these things knocked my wheels out of alignment?
5
Wish to understand why non-stock vehicle alignment is an issue