Alignment is out of spec a tad - should I worry?

So I bought new tires recently for my 2002 Nissan Sentra and wanted to make sure that my alignment would not eat them up. Even though effectively my entire suspension/axle system was overhauled recently, some of the specs are still off. Three different shops keep telling me that it's not a huge deal and won't make my tires wear improperly.

This is the report from the last place I went to, other reports show a similar story, though this one shows probably the most "extreme" deviations (though I have a feeling these sensors aren't very accurate) 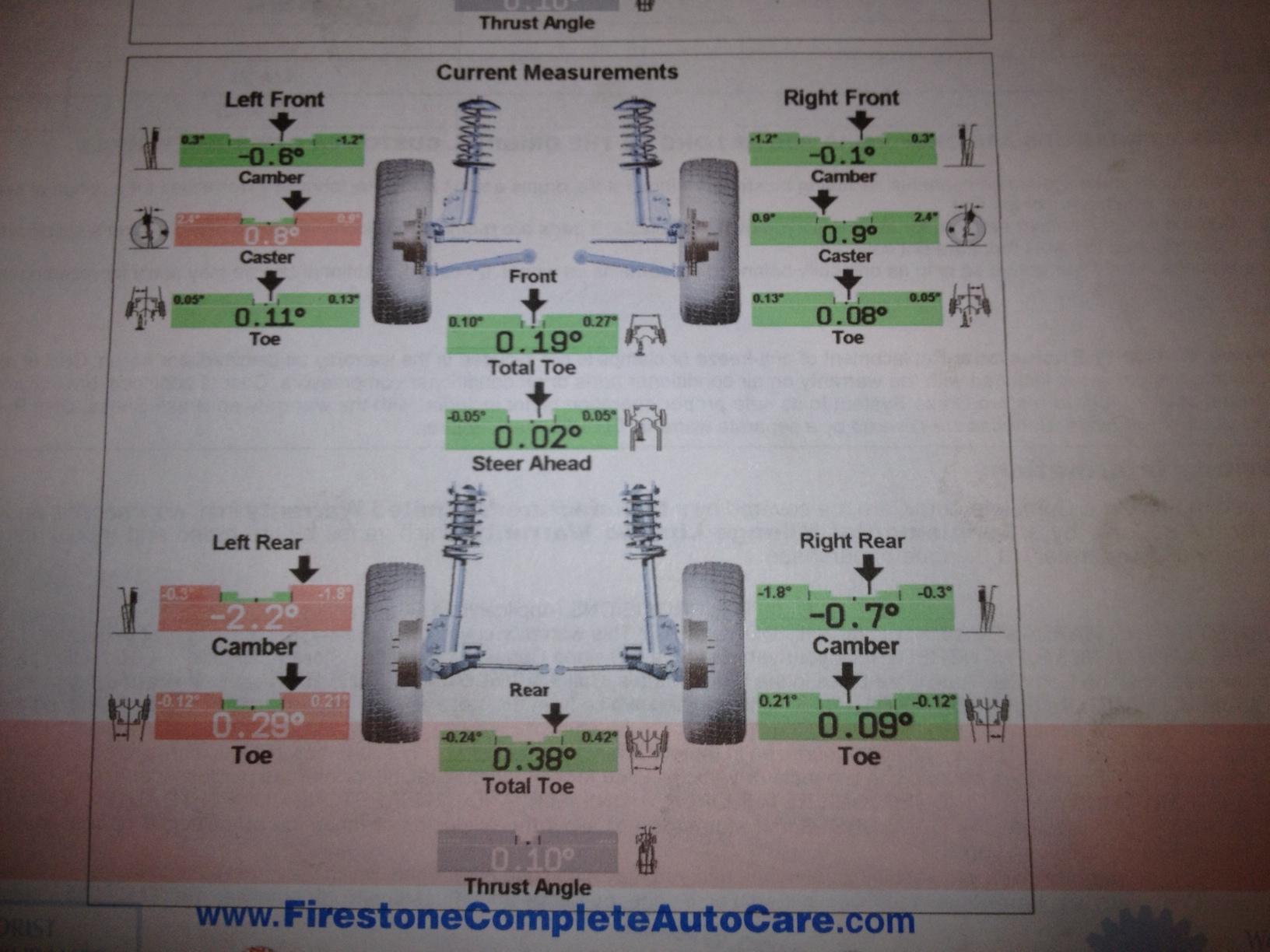 Should I be worried? I am not sure why the front caster is out by a tad bit, seeing as that is a brand new shock there. The rear though, is not adjustable, it is a solid axle and the print outs all say "Manufacturer does not specify rear Toe/Camber adjustments". I've already had this axle placed with a new Nissan Part.

The only thing I see of any real concern here would be the left rear toe - it's off enough to possibly cause some tire wear. However, since it can't be adjusted, your best bet is to just rotate the tires regularly (every other oil change is a good rule of thumb) and keep an eye out for wear. You didn't say which Nissan you're driving, but I'm assuming it's a Sentra/Versa or other smaller model, which means likely you won't see any severe tire wear on the left rear anyways.

The combination of that much camber plus that much toe will cause it to wear more quickly, but there's not much you can do about it without getting extreme in swapping parts. Keep rotating those tires so you don't burn out just the one and don't worry about it too much as I expect it would cost a lot more money to fix than you'll spend in extra tire costs. That's the factory rear toe setting for my RWD car that rides on real sticky performance tires that can't be rotated. I get around 20,000 miles out of them. I expect you'll do a LOT better AND you can rotate them... As far as the caster, that has minimal impact on wear in general, and yours just barely out of spec.

Found an interesting thread at allsentra.com. Some choice bits from one of the posts:

Many Nissan Sentra rear axles are mismanufactured with a huge toe in.

Nissan actively discourages/forbids delearships to put in shims to correct the rear alignment.

Specific Nissan Sentra calibrated shims can be obtained from rockauto or NAPA. Look under suspension parts. Shims are about $13 each.

There is significant negative camber by specification on the rear so tires should be rotated.

Not the answer you're looking for? Browse other questions tagged nissan suspension struts alignment axle or ask your own question.

8
Wheel Alignment: Just how bad is bad?
5
Had shocks, rear axle, tires replaced - alignment still out of spec and car vibrates?
13
How to diagnose high speed vibration?
6
Is it possible to bleed brakes without using floor jack?
2
Could worn out front shocks cause extensive inner tire wear?
3
How to Troubleshoot "Jumpy" Rear End
2
When should I get an alignment after strut and coil replacement?