It began with a turn of the ignition... and a click. No start, no attempt to turn, just a click. It would usually turn over the second time. I thought it might be the starter relay replaced and no change. I replaced the battery. No change.

Then it did something super weird. After a click no start, it would sometimes start and fail to disengage the starter. You could hear the thing whining as the engine ran. I quickly turned the ignition off... but the starter just kept on going. I had to disconnect the terminal on the battery to stop it. Lots of sparks.

It would eventually turn over, properly disengaging the starter, but the issue persisted on and off for some weeks.

This morning, it did the weird thing where the starter would not stop, and then it began to smoke. I burned my fingers trying to disconnect the battery, but eventually got the thing off.

Now I'm stuck with no way to start. I can't afford a repair for a couple more weeks, and... yeah. Life is grand.

I also found a small rubber cylinder that I at first mistook for a bolt, lying near the starter. It seems to have some electrical damage to teo metal prongs the go into it. It appears to be hollow, and slightly melted. Theres a small rectangular hole on the other end. I have no idea what this is, where it goes or what it does.

Based on the location I found it, it had to have afllen off when the car failed to start this morning, because any motion of the car would have made it roll out of the engine compartment and into the street.

I haven't tried starting it again. I don't want to set my car on fire.

Whether it was the starter or not that was causing the issue, it certainly now needs replacing. The fallen part is a breather, there are often two on these starter motors, one on the solenoid cavity, and one on the end head that covers the brush gear. It's fallen off because the innards nearby have gotten hot enough to melt/burn the flange that was holding it in. 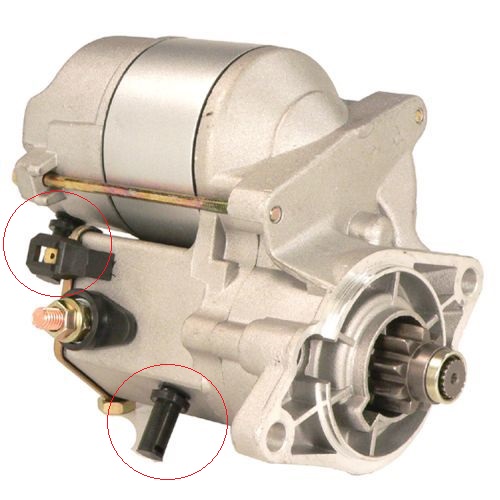 There's a big copper contact bar inside the solenoid housing, on the end of the moving plunger, once the pinion has meshed with the ring gear, it closes onto two contacts, one is connected to the stud that the cable from the battery is attached to, the other goes to the motor. It's likely that either the solenoid plunger has stuck, possibly from corrosion or debris, or the contact bar has welded itself onto the contact studs.

Traditional 'fix' for these sticking contacts was to rap on the solenoid housing with a wrench until it freed itself, but I've seen some that had been rapped so much that the housing had broken. Given that the big stud is permanently live, and shorting it to the grounded housing will cause a lot of fireworks, it needs some care. It might be enough to start it once more, but don't keep doing it. You need a new starter.

Not the answer you're looking for? Browse other questions tagged starter or ask your own question.

3
Lost electricity to cab and Engine won't turn over
1
Roaring sound when starting or running with my 95 LT1 Camaro Z28
2
Weird starting and not starting for my 2005 Kia Sedona
8
Starter Motor Intermittently will not engage
5
Engine noise and smoke while driving with low oil, no longer starts
0
Starter solenoid breakdown
1
Starter issues with low battery only
0
always takes a few attempts to start the engine (no cranks), even with new battery
3
Car starting hack works - but is it an issue with car battery, starter or alternator?
13
Car won't start after sitting for 2 years even with a jump. Is it a starter or alternator issue?