My car has had an intermittent starting problem with moisture since the beginning of this year. When it rains, it's either very difficult to start or it won't start at all. I was planning on figuring this issue out over the winter (This isn't the current issue I'm trying to resolve).

One morning, it rained fairly bad. I tried to start it and it would not start. After I let off the key, the car would continue to run. The mistake I made, was that one of those times, I tried to immediately start it again while it was continuing to run. The starter sounded worn out after that.

At the time I thought I had messed up the starter, I was okay with this since I was going to rebuild it come winter time anyway. I was leaving the gym one day and came to an intersection, turned the wheel and began to make a turn. I heard a very loud clunk and the car started a roaring type sound that got worse the higher the RPMs got.

Does this sound like a starter or flexplate issue? The sound is present when starting and driving. I can get a video, it's pretty horrifying sounding. Car doesn't seem to have any present issues starting under normal conditions. (Except the sound)

EDIT: Car is an automatic, updated flywheel to flexplate

UPDATE: I went to go make a video today, however the roaring sound did not occur! The starter made the sound you'd expect to hear from a dying starter, but then a second later, it started, with no roaring sound at all! I'm dropping the starter tomorrow and taking it into a speciality shop for it to be tested!

Doesn't sound like a flex plate or starter issue based on your description. A video would help to identify the sound. Does anything make the sound better or worse? Does it do it all the time? From under the hood where does it sound like the sound is coming from? You can use a mechanical stethoscope or a long screwdriver to find the location of the noise.

Just FYI on the difficult to start when it rains, it's the opti-spark (the distributor) this is a known issue. You can try replacing just the cap and rotor but I haven't had good success with that. It takes the whole thing most of the time, and since replacing even the cap and rotor requires removal of the water pump I generally replace the whole thing to save the hassle of having to do the job twice. 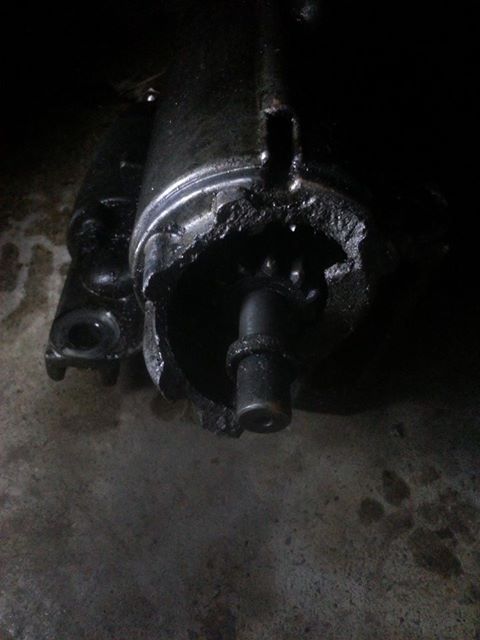 What you see here is what remains of my starter. I think it's safe to say that I need a new one.

Not the answer you're looking for? Browse other questions tagged chevrolet starter lt1 or ask your own question.