I understand a number of things could be going wrong here, but tonight's discovery has been that the actual readings on the post-cat lambda probes are sitting unchanged at 0.42 whilst the engine runs and I rev the engine. Conversely, the probes pre-cat are varying substantially:

These were taken whilst the car's engine was warm, but not right after or during a substantial drive.

If necessary, I can post a video of the readings, but that's the gist of it - pre-cat O2 sensors are fluctuating substantially whilst post-cat sensors aren't at all. It's interesting that they're both sitting dead at 0.42.

Does that mean my post-cat sensors have failed and need replacing? Or is this some incredibly accurate tuning by the geniuses at BMW!

I just took my car for a quick drive to get the engine temperature up to the operating level, and have the following readings via INPA software: 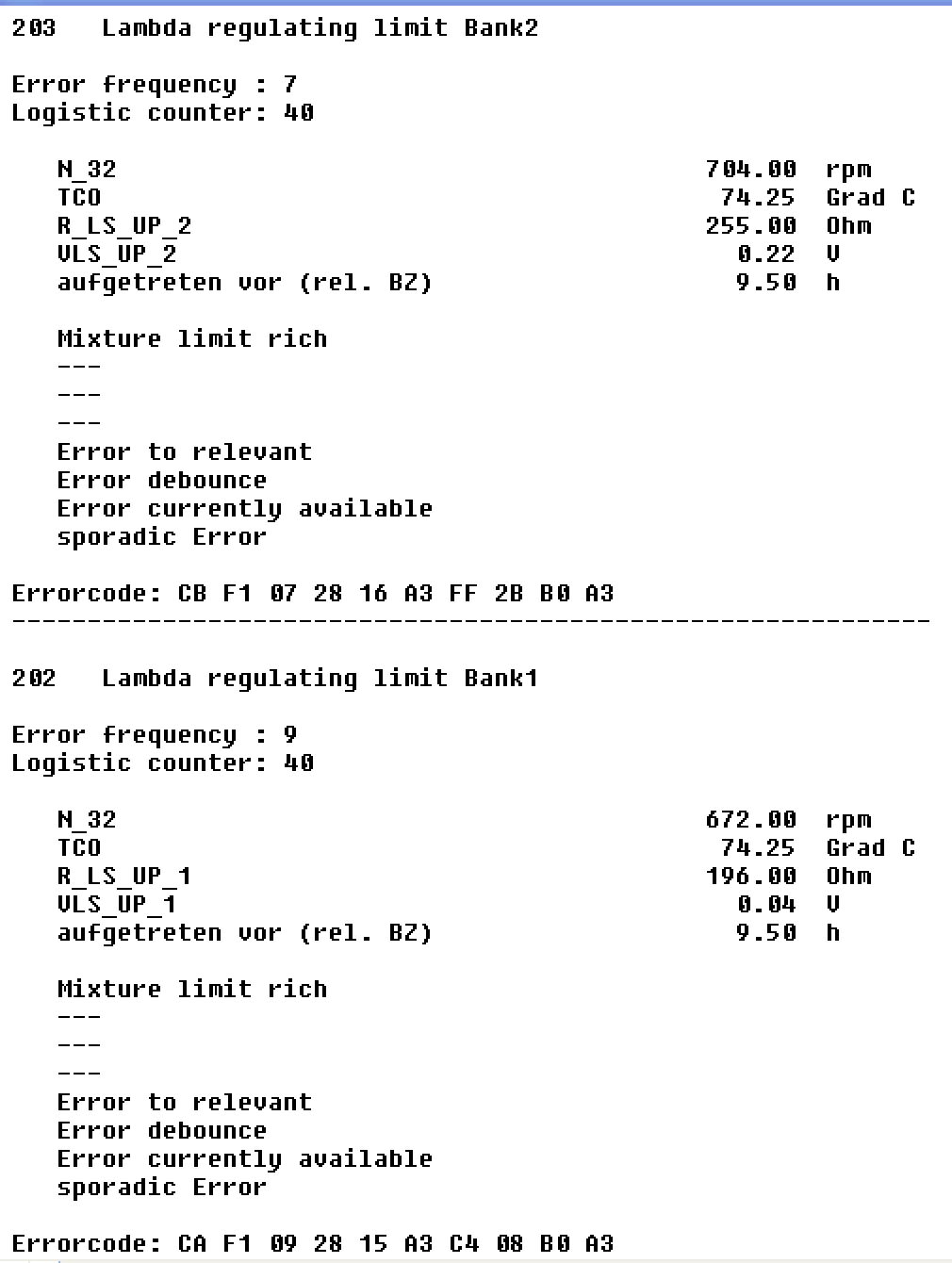 Did not clear errors prior to drive/readings

Interestingly, the lambdaintegrator readings are now within the expected ranges with flat zeroes.

I've taken screenshots of the rest (digital, throttle, VANOS, roughness etc) but I don't think they'll be helpful so haven't included them so far. If the above readings are also still too much, please advise, though I think they should all be useful.

Here's how to decipher INPA

It may depend on how you are gathering that data. Perhaps a "Live Data" OBD Parameter ID or "PID"?

You may need a more specific scan tool or smarter software.

Some (especially higher end) vehicles use wide-band O2 sensors, and on my scan tool read out in milliamps, not in volts.

In other words, your scan tool may be looking at the data the wrong way, or in the wrong place.

Also, keep in mind that the cat (and downflow sensor) need to be really hot to give any meaningful data. If your scan tool setup is portable, I'd suggest some observations while driving.

I had the same trouble code from O2 sensors like above. It's not the sensors that have problem. It's just telling you, it's trying to compensate for F/T mixture but it was unable to due to the fact it had reached it's LIMIT for compensation.

I tried a lot of other testing, finally it is the air leak that caused that problem. Mine was when I replaced the Cover Valve Gasket and it was not sitting correctly therefore I had huge vacuum leak. I did a smoke test and found out the problem was the cover valve gasket was NOT sitting properly, fixed that and smoke test again and no smoke. Clear the code, started engine, and no more problem. Don't replace O2 sensors for this problem. I've been running for 2 days without any problem, and INPA showing Petrol Adaptation is back to normal 1-2, instead of 28 like before and the engine is smooth now.

15
Do I have to rely on wire color to correctly wire up an O2 sensor?