Two-Stroke Diesel Engine - Do they use forced induction on them?

As I have indicated before, I'm very diesel ignorant. I just know the basics, very basics.

In a two-stroke diesel engine using forced induction seems necessary but at the same time I see challenges. In motorcycles, which I have more knowledge in, the crank seals are an important component for the two-stroke engine process to function properly. If there is an air leak at the crank it it's the same thing, if not worse, as having an air leak between the carb and the head. The seals being nice and tight are essential.

I know there are examples out there of forced induction two-stroke motorcycles but the modifications are extensive as the crank seals aren't designed for that high of a crankcase pressure.

I would imagine that some kind of exhaust valving is essential as well in order to use back pressure as a regulator of exhaust gasses. I'm thinking out loud here and not making a claim. My other question.

If so, what are some of the design considerations?

AND my last question?

Would a mechanism for exhaust gas regulation include some kind a poppet valve as in a four-stroke engine?

I would imagine that if above is the case then this would still be a two stroke but some type of hybrid design, using poppet valves. Again, thoughts, not claims.

The only two stroke diesel i'm aware of is the Detroit diesel. The Detroit diesel does use forced induction but not in the way that you think. From your description it sounds like your describing a two stroke gasoline engine. The engine draws in air into the crank case. Then compresses it and shoots it into the combustion chamber.

This setup works well with gasoline because the air and fuel are drawn through the whole system. The lubrication in the system is provided by oil that is added to the fuel. As the air, oil and fuel mixture is drawn through the crank case it lubricates the rings and the crank bearings. In a diesel the air is lacking fuel and if oil is misted into the air the oil may ignite (it's a diesel). 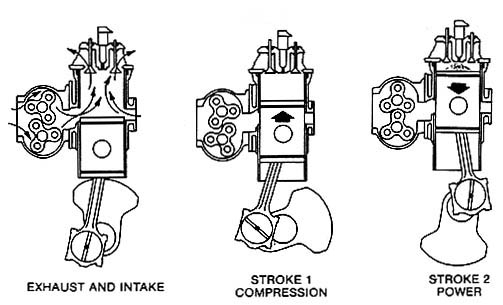 In a Detroit diesel the crank case is filled with oil which provides lubrication for the needed components. When the piston reaches the bottom of travel the exhaust valves open and the piston exposes the port at the bottom of the cylinder sleeve. At this point the super charger pushes fresh air into the cylinder and pushes out the exhaust gases. The piston then rises up compressing the air. Then the injector fires and the piston is forced down with the power stroke.

While I've never worked on a Detroit diesel generally diesel EGR systems are very similar. Exhaust gas is moved from the exhaust through an EGR cooler and then induced into the engine though some type of poppet valve.

Renault are developing a small 2 stroke diesel with turbo and supercharger. It's name is the Renault 'Powerful' see for example - http://www.enginebuildermag.com/2014/12/renault-unveils-two-storke-twincharged-diesel-two-cylinder/

Not the answer you're looking for? Browse other questions tagged engine diesel engine-theory two-stroke forced-induction or ask your own question.