The problem I have been having with my VW Passat was that my cigarette lighter was not working in the car. It is the only one in the main part of the car (there is another one in the boot) and it would be a pain if I couldn't use it to charge my sat nav or phone whilst I am driving. Has anyone got any ideas?

As it turns out, after further investigation a coin had fallen in to the lighter and caused a short circuit at some point in the past.

To fix it (at least in my case - the most common problem), you need a new 15A (blue) automotive fuse and a flat head screwdriver (or anything to prize off the fuse box cover).

In my car the fuse box is located between the drivers door and the main interior console of the car. Use the screwdriver to lever the cover off gently - you don't want to break any of the plastic clips that hold it secure!

Now you should be able to see a fuse card diagram that will tell you which fuse it is that corresponds to the cigarette lighter. It may look different if you have a different car manufacturer. 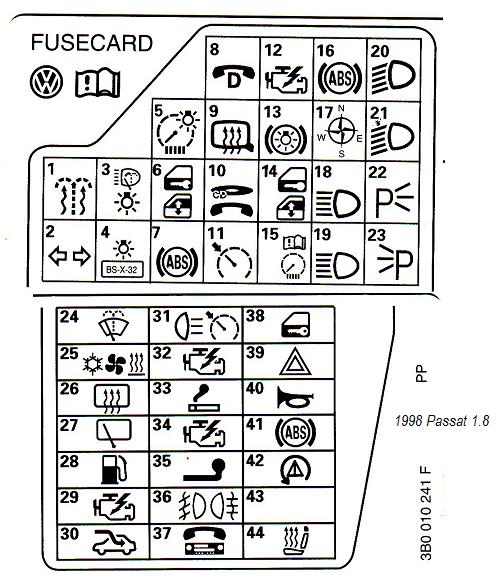 The cigarette lighter is fuse number 33 on the card so find the fuse in the car in the corresponding location. The shape of the fuse diagram will match the shape on the actual car.

Now take the old fuse out using the tool provided and replace it with the new one. Put the fuse box cover back on and now your cigarette lighter should work! If it does not then you may need to replace the cigarette lighter itself which is much less common.

This useful video helped me alot (it was my first real car maintenance).

There is usually a fuse just for the cigarette lighter socket, this is the first thing you should check. You should be able to find it in one of the fuse boxes. Looks like there is a fuse box on both the driver's and passenger's side in the passenger compartment and different Passats have different fuse numbers, but it looks like you are looking for a yellow 20 amp fuse.

Not the answer you're looking for? Browse other questions tagged electrical vw interior passat or ask your own question.

3
can i split off another circuit from fuse box to run power to cigarette lighter?
5
2004 VW Passat B5 Peculiar Engine Noise
3
2004 VW Passat B5.5 - Why are my wing mirrors being weird?
6
How can you optimise the rate at which your electronic devices will charge in the car (fast in-car charging)?
7
2004 VW Passat B5.5 - Is one of my heated wing mirrors actually broken?
3
Cadillac CTS can't take key out of ignition, automatic gearbox lights would not come up when changing gears
0
Dashcam Blown Car Fuse