I've been working on my vehicle a lot lately. Mostly chasing down a rough idle (rich condition) that ended up being a bad distributor assembly and retarded timing. (Edit: or so I thought; performance improved, but the root cause was something else entirely)

The vehicle is running pretty good now, but what was an occasional run-on ("dieseling") is now happening all the time. Just within the last few days it went from run-on only after driving for extended periods or very hot... to dieseling nearly every time I shut it off.

By "run-on" or "dieseling", I mean that the car sputters for a second or two after turning off the ignition.

The following is what's been worked on, replaced, or checked in last six weeks...

Diagnostic Trouble Codes - No current or pending codes. Everything seems to be running normal as per live scan tool.

Distributor Assembly - Replaced entire distributor assembly due to bad bearings. This ended up being the fix for the rough idle condition and the likely cause of the retarded timing. Again, set timing to 0 TDC as per GM spec. (Edit: although this was a real issue, it was not the root problem)

Timing Chain - Inspected timing chain slop and only found 3.5 degrees of play where 3 to 5 degrees is acceptable.

Vacuum Leaks - I've visually inspected all vac lines/hoses and sprayed a little carb cleaner looking for leaks. Could not find any leaks, but changed some really old looking hoses anyway. At idle, vacuum initially reads 17 psi, and after the engine warms up, it drops 1-2 psi and holds steady at 15-16 psi.

Fuel Delivery - No leaks. Pumping and holding specified pressure (58 psi) and passed all leak-down tests as per GM manual. CMFI "spider" assembly was changed sometime within last several years as was the fuel pump. The fuel filter was changed only 5000 miles ago. (See Edit #3 below)

Ignition Coil - Tested bad and replaced with an MSD.

TPS (Throttle Position Sensor) - inspected and tested good as per this procedure.

MAP (Manifold Air Pressure) - inspected and tested good as per this procedure.

IAC (Idle Air Control) - visually inspected and wiped off black grime but could not find a test to perform. edit: changed the IAC Valve since posting

IAT (Intake Air Temperature) - could not find a specific test, but resistance reading goes up as temperature goes down.

MAF (Mass Air Flow) - this model year/engine does not have one.

Exhaust Restrictions - exhaust system is clear from front to back. All new gaskets and a new muffler.

Oxygen Sensor - Not working properly as per live scan tool and replaced.

Knock Sensor - Passenger side tested bad as per resistance testing and replaced.

Cooling System - Replaced radiator, hoses and thermostat. Radiator was leaking and thermostat was too slow to open or sticking closed. Cooling system is now properly regulating temperature as per stock thermostat. I previously noticed more run-on only when engine was hotter, but in recent days, it does not matter.

Compression Testing - I'm not sure these readings are valid because I later found out my testing methodology was flawed. The engine was cold and I neglected to block open the throttle. ~165 psi on #1, #2, #3, #4; ~135 psi on #5; ~185 psi on #6. Not great readings, but there's not anything I'm willing to do about it. Not sure if bad/uneven compression could explain anything other than a misfire or rough idle. (I also squirted oil in #5 and re-tested. Pressure went way up indicating a ring issue as opposed to valves)

Evaporator Canister Purge System - The GM service manual points to this as the typical cause of "dieseling". However, I disconnected the line from the canister to the engine and the run-on ("dieseling") problem continued. Since disconnecting had no effect, I hooked it back up.

Although everything above was worked on within the last six weeks, I've done nothing at all in the last two weeks or so... yet suddenly only in the last few days, it went from almost never dieseling to dieseling all the time. In other words, although I've worked on a lot of items, nothing was done just prior to this problem getting worse.

So what's left? Carbon build-up in the engine? It ran very rich for a long time thanks to the bad distributor, but the carbon should be clearing itself out... and the run-on should not be getting worse, but it is.

EDIT (July 2015): One of my theories is cylinder #6 with the highest compression is the root cause. Cylinder #6 had a spark plug with a broken insulator at the tip that I believe happened sometime last year. Combine the poor spark with the retarded timing (running rich) for several months and #6 is likely extremely dirty. From my online research, I've read that thick carbon build-up cracks apart and the edges glow red hot, which can cause dieseling. Perhaps now that the engine is timed and running closer to spec, the carbon deposits are breaking apart which creates even more cracks with edges that glow red. It will just take time to clear itself out. Thoughts?

Remaining roughness in the idle was finally tracked down to a loose heat shield that was intermittently shorting out the spark plug boot for cylinder #4. No doubt the excess fuel in #4 was contributing to the run-on issue.

It also took 3,500 miles of highway driving and some internal steam cleaning, but it's finally running smooth without any run-on.

It wasn't long after my last edit that the overall roughness came back with a vengeance. White exhaust smelled of gas and I was completely out of ideas... again, the leak-down test kept hold at 60 psi with no drop whatsoever. Fuel mileage suffered and back-firing ensued. Many months of frustration passed and I didn't know what else to check.

It suddenly got so bad I decided to check fuel pressure once again... FINALLY, the leak-down test is showing a massive drop in pressure, from 60 to 20 psi within seconds.

I ordered a new "Spider" (CMFI Fuel Injector Assembly) and "Nut Assembly" (Fuel Hose Kit), and here's what I found on first inspection: 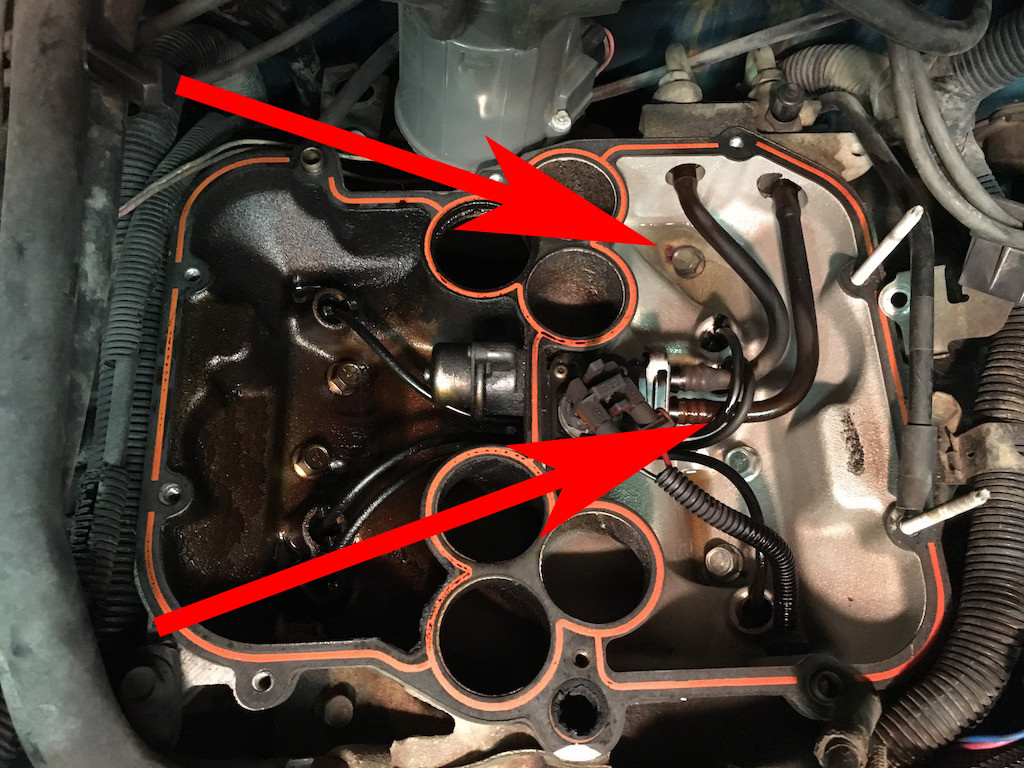 Notice all the liquid fuel accumulation on the driver's side in the rear. Also notice the wetness near where the pressure side of the Nut connects to the Spider.

There was a pinhole where one of the fuel injector hoses wore a notch: 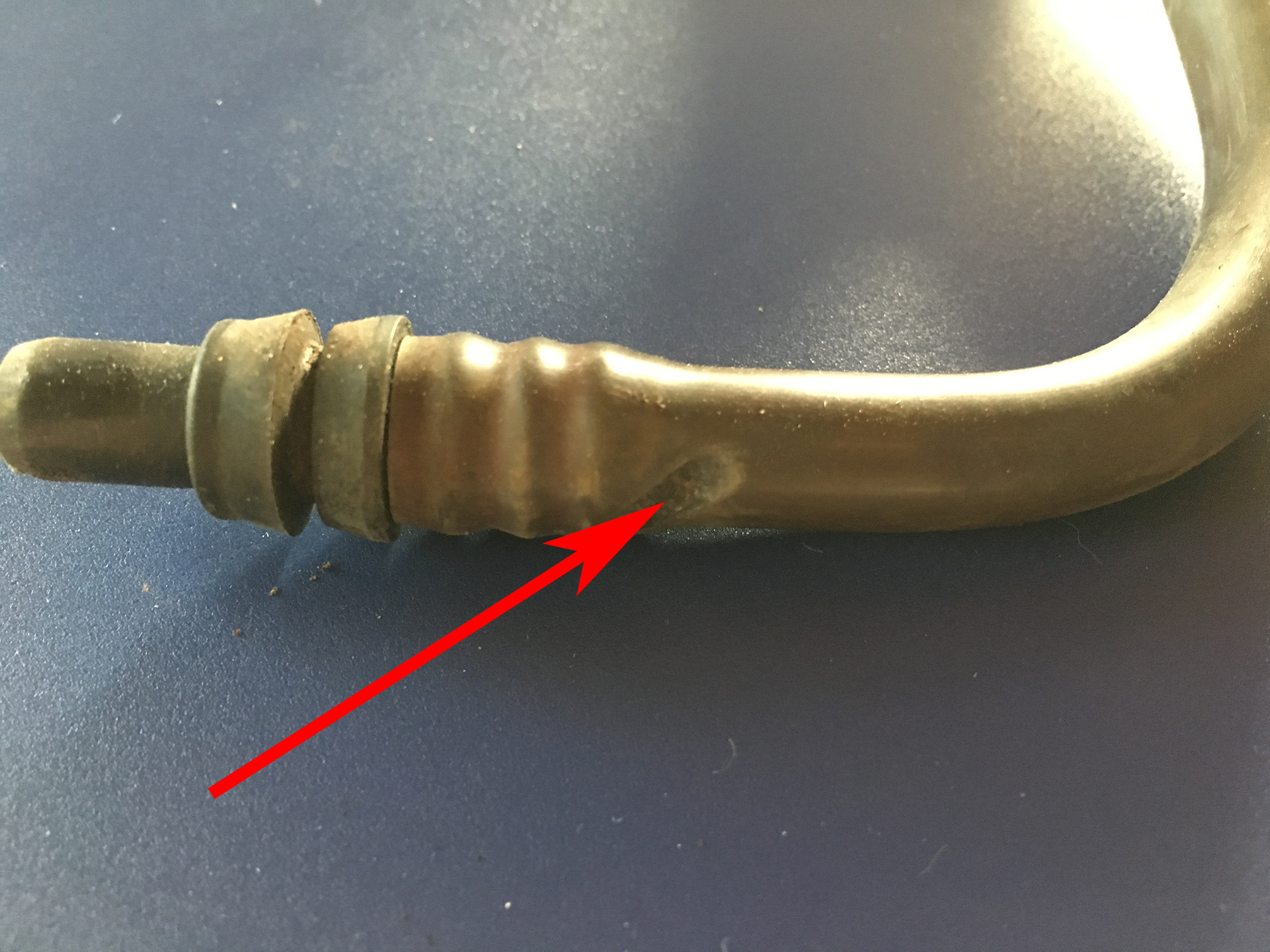 I ended up not installing the rebuilt Spider because it was defective (Rock Auto, rebuilt by Auto-Line). I reinstalled my old Spider, which was functional and holding fuel pressure.

Now to explain the last piece of the puzzle... why during all these many months of rough idle, dieseling, and backfiring, did it always "pass" any/all leak-down tests? As you can see in the next photo, there was also a pinhole worn into the return line. The return line is never part of a leak-down test because it's only used when the engine is running. 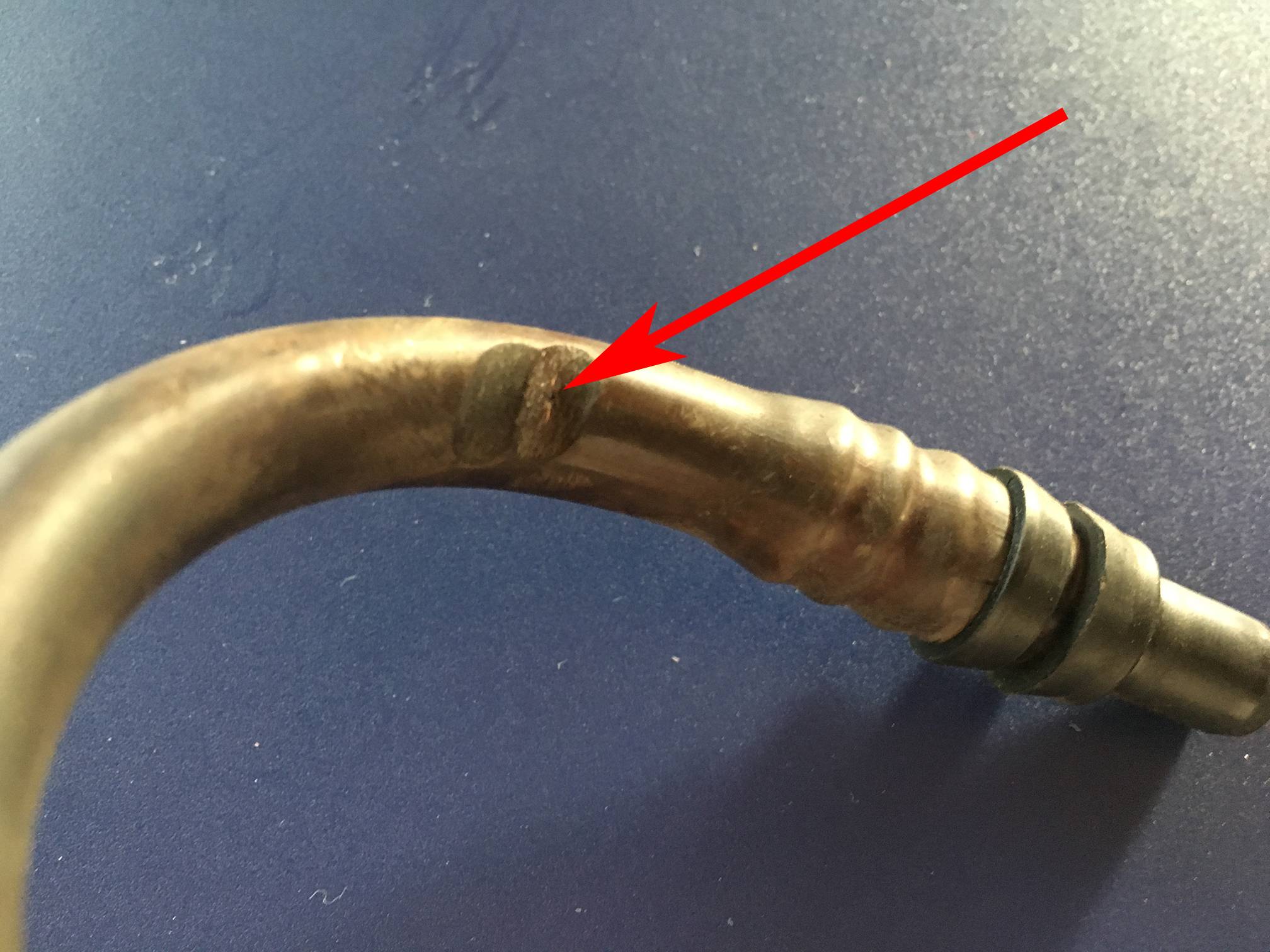 It was only after a second pinhole wore into the pressure line that the leak-down test revealed a problem.

Anyway, despite the other real issues I found and fixed, the vast majority of my dieseling, rough idle, and back-firing was caused by internal fuel leaks all along... first on the return side and then later also on the pressure side. Too bad the initial leaking started on the return line, where a standard leak-down test would never reveal this.

IMPORTANT: The fuel "leak-down" test will NEVER be able to reveal a leak on the gasoline return line. With everything else functioning properly, the return line can only exhibit its leak(s) while the engine is running. AFAIK, there is no test that can detect a leak on the return line, leaving only a visual inspection based on symptoms.

Click here for more detailed information about the leak-down test.

Leak-down Test
With the exception of the return lines, this will test the entire systems ability to hold fuel pressure...

I think your idea you are having a major carbon buildup is a good theory. You can try and get rid of the carbon by doing a Seafoam treatment. You mentioned are in the process of running a bottle of Techron through it. While this will help if you are using it all the time, it won't do much for a huge carbon buildup.

Also, I believe you have carbon buildup in more than one cylinder. If it were only one cylinder, there wouldn't be enough power to keep it dieseling on. You might get just one kick-over from the single cylinder, but that would be about the extent of it. The engine wouldn't get past the compression a second time. The Seafoam treatment should do the trick for all of the cylinders though, so have no fear.

Not the answer you're looking for? Browse other questions tagged engine chevrolet rough-idle blazer dieseling or ask your own question.