How do I know if my car has an engine block heater?

Oddly, it seems that some sites of questionable repute seem to be selling a "2010 civic engine block heater." It seems that Honda has this feature on some civics, but those are either Si or Hybrid. Mine is neither of those two.

Is there an easy way to just check and find out definitively?

(EDIT: Since the OP told me he is in Canada, I will update my post accordingly.)

Since your car is a Canada car, it more than likely came with one due to the cold Canadian winters. Doing some checks online, it appears the factory block heater is locate at the passenger side front of the engine, just below the exhaust manifold. It screws into the block. Here is a picture of it (pre-installation w/ cord): 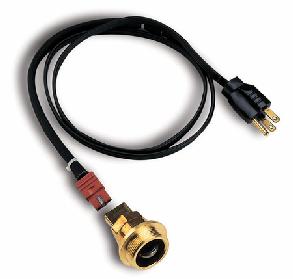 You may see it (the brass looking piece) with or without the wire as it is detachable.

From the pics I've seen, it would be pretty hard to see. Since you are having problems finding it visually, the easiest way to check is to look on the Monroney sticker (window sticker from the dealer) if you still have it. Since it is not a regularly installed option, it would be listed there as an option. The next thing you can do is to call a Honda dealership and have them run the VIN to check to see if it is installed. You'd talk to the parts department to do this. If they are unwilling to do this, you could take it by the dealership directly and have an experienced Honda technician take a look. They would know where the stock location of the block heater.

If you are looking to install an aftermarket block heater, there are three types I know of. First is the kind which you install inline in the heater hose. You cut out a portion of the coolant line going to the heater core. The unit then plugs into a standard electrical outlet which allows you to heat (or keep heated) all of the coolant within the system. Secondly is the type which replaces a freeze plug in the engine. This does the same basic thing as the first one I mentioned by heating the engine coolant. The third type magnetically attaches to the exterior of the engine oil pan and heats the oil. Of the three this is the easiest (and least messy) to install, but is probably also the least efficient. Also, if you have an aluminum oil pan, it will have nothing to attach to.

I added a Honda(tm) OEM block heater to my 2009 Civic Hybrid. I was living in Kansas at the time and pre-heating the engine seemed to help with mileage an time until heat available on very cold mornings. On the 2009 HCH there is a plug screwed into the back of the block just below the head, on the passenger side. unscrew the plu and replace with the heater. You have to drain down the coolant to do this with minimal mess. Actually a far easier operation than the Freeze plug replacement (which I did at the same time to a Chrysler V-6). I ordered the part online (from a reputable, but now forgotten site) Be certain to route the cable as per instructions and away from any exhaust pipes.

Not the answer you're looking for? Browse other questions tagged civic block-heater or ask your own question.