Neighbor uses cans of spray paint on his car - can it travel to my car?

I have a crazy neighbor in my apartment complex that spray paints his car instead of washing it.

I have a 2013 car with a nice paint job from factory when I bought it new. It has a nice clear shiny look to it.

The other day I found my neighbor spray painting his tires and other parts of his car while my car as right next to his in the parking lot.

He uses spray paint cans that you buy at the store. Can his aerosol travel far enough to get on my car and ruin the clear shiny look on my car?

It ABSOLUTELY can. It's called overspray. Take one look at a bad paint job and you'll know it's a real thing. While not a car, take a look at this image: 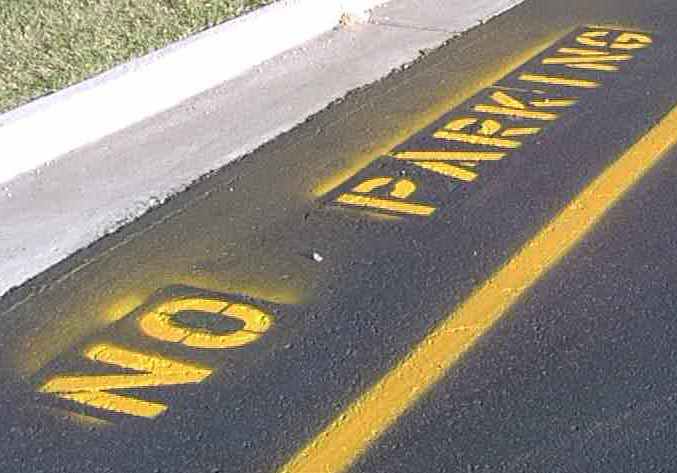 Imagine how they do this. They put a stencil down and spray their spray can at the openings in the cardboard (or whatever the stencil was made out of). You'll notice there is yellow spray paint above/around the border of where the edge of the stencil. For the most part, this is overspray.

Overspray refers to that portion of sprayed paint that does not land on the target.

And follows with reasons for overspray:

Triggering paint off the part or triggering when no part is present is a common source of overspray. Improper head to target distances are a cause of increased overspray as are improper angles of application. Turbulent air flow conditions can create overspray. Mechanical force such as the turn around points of vertical or horizontal reciprocators can cause consistent bursts of directional overspray. Insufficient levels of electrostatic force contributes to large amounts of overspray.

Excessive atomization is another prevalent cause of overspray. Creating tiny paint droplets, they can dry out in flight to the target and get swept away by the flow of air. Often, spray guns have their atomizing and pattern air volumes so high that they are more efficient at fogging than painting.

As the paint atomizes when it comes out of the can, it becomes a fine mist. It's easy for this fine mist to become airborne and travel distances of several feet. If he's doing this right next to your car, there is no doubt in my mind some of that paint has landed on your car. Total suckage.

When your neighbor is spraying, I'm sure he's not being very careful with either his "trigger on" (depressing the spray button) or "trigger off" (letting off the button). I'm sure it goes all over the place. If he suggest he's not causing any overspray, there are two ways (I can think of) to prove him wrong in a quick manner. First, look around his car where he's been spraying. If there is any spray paint on the ground or other areas of the car which were not originally intended to be painted (I'd suggest things like the wheel wells), that's overspray. Second place to look would be dude's clothing. If his clothing has any paint on it, that's overspray (hands could be included in this). I'm sure in either case he's not intentionally aiming at either of these things.

Not the answer you're looking for? Browse other questions tagged paint body-work paint-clearcoat or ask your own question.