Can I hold an engine (with aluminum block) using its gearbox studs?

I just finished building my own engine stand, however, I have (yet another) problem to solve: in the original Czechoslovakian manual I see the factory stand holds the engine from a side, holding it by two tabs it has at the bottom where the oil sump gets attached, and in the middle of that side by a threaded hole between cyls #2 and #3, but not passing through. The issue is that hole has some weird diameter and threading: a spark plug looks to have the same diameter, but the thread is like 1.25 however it fails to be such when I use the threads gauge.

As the engine will build up a lot of weight when adding its pieces (the head is cast iron, for instance), I'm concerned about that hole or any invention I can make with it. I thought about re-threading it to whatever the spark plug is, and then weld a rod to an emptied spark plug to make it a stub...could work but...

Question: Can I hang the engine by its rear side, the side that has the flywheel, the side that attaches to the gearbox, using the same studs it goes there? Would that hold the engine ok for assembling it? Or any other suggestions :) 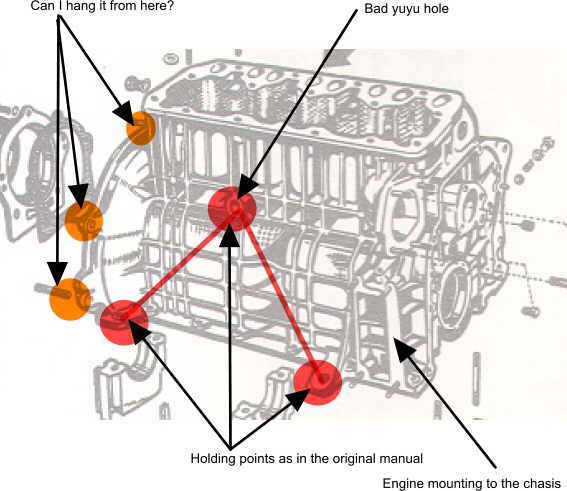 EDIT: the stand they show in the original manual 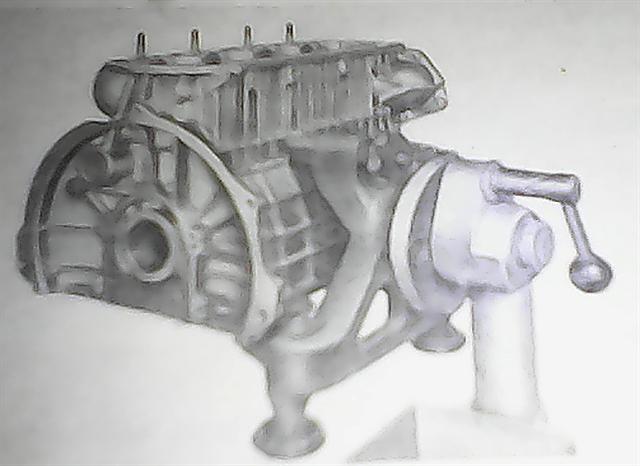 EDIT: so I got scared with the idea of hanging the engine from its rear side: the stubs there are mere M8, maybe they are just for attaching the gearbox but I don't want the risk of breaking something there. This is the stand I made, and a pic shows how I resolved the hole problem by using a spark plug. 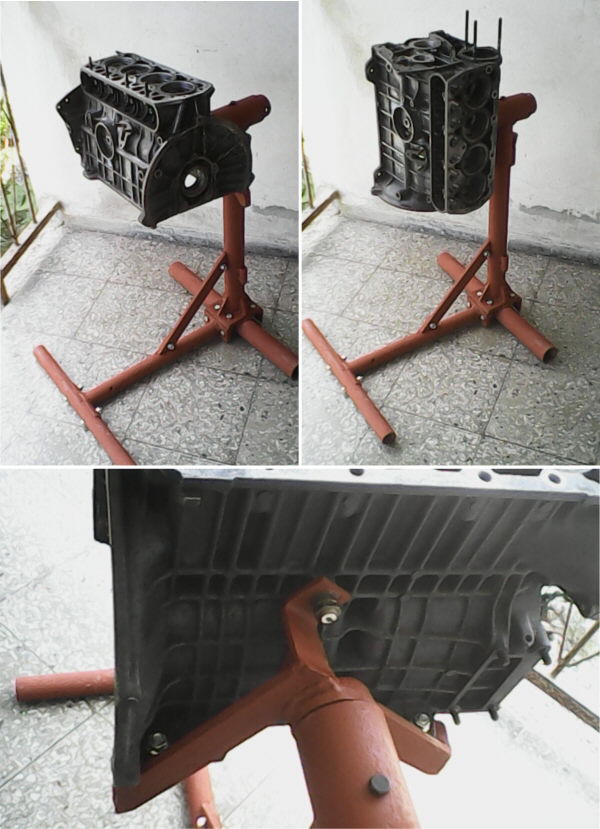 TL DR: You should have no issues.

Almost every engine stand I've dealt with and/or used is designed to support the engine from the back side of it where the transmission connects to it. There should be more than enough support at the transmission bell housing mounting points to support the engine off of the stand. You'll want to ensure you have long enough bolts to have full engagement into the threaded holes. The bolts should extend into the holes by at least 3/4" (~2.5cm) ... this is at a minimum. You'll want to ensure there are at least three mounting points, but four preferably. Ensure the bolts hold the arms tight against the block. If it is at all lose, you stand the risk of pulling the threads out of the block.

The biggest reason why you'd absolutely want to mount it from the back end of the engine is because you'll need to rotate the engine during assembly. You cannot do this if you have the engine mounted by its side.

I would say yes, but use most, if not all the studs as using just 1 or 2 may crack the casting. The disadvantage will be your access to fitting the flywheel and clutch. The factory mounting points are usually placed to allow robots to do assembly. So, after your edit, the answer still stands. :)

Not the answer you're looking for? Browse other questions tagged engine skoda estelle assembling or ask your own question.