Clutch "catch" point has changed, along with distance needed to engage

I was headed home the other night, accelerating up to highway speeds, when suddenly I felt the clutch pedal completely change under me.

It previously started to catch at about the 1/4 way release point, and was fully engaged around the 3/4 out point (see pic). The clutch now catches nearly immediately -- around 1/8 out -- and is fully caught by the 1/4 out point. 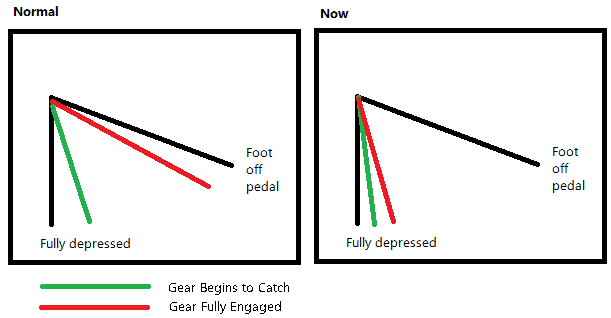 Additionally, the entirely travel of the clutch FEELS different.. less like a rubber band and more like a spring.

I'm concerned that this is the first step in a much worse situation, so I've stopped driving the car.

This clutch is not the matching one for this car; it's the VR6 clutch, which is not dual mass (balanced) like the factory. There was a significant price difference, and aside from chatter, I had been told that the VR6 clutch could be used as a drop-in replacement. It's worked fine for the last 80k miles.

Is this an issue with the pedal mechanism, or with the clutch itself?

A coworker pointed out that the cylinder is shared by the braking system, and that a seal might have gone somewhere unrelated to the clutch. He said that If the brake/clutch fluid is a problem, the clutch will start to experience it first, before the brakes.

Could be either one. Not driving it is a good idea, the clutch is probably not actually disengaging all the way, and driving on it could greatly increase clutch wear. Most of my answer is based on this statement:

...when suddenly I felt the clutch pedal completely change under me.

You could try bleeding the hydraulic system first. In my experience, air in the lines would have been a problem that crept up on you over time, not a major, instant change during driving. That said, bleeding the system is easy compared to most of the other potential problems, so it is a good place to start.

Probably the easiest thing to check would be the return mechanism for the pedal. There is usually a spring mounted somewhere at the very top of the pedal that helps to push it and the master cylinder back out. Given that the pedal still returns all the way, I doubt this is the problem.

The next two places to look would be the hydraulic system, and the release springs inside the clutch/pressure plate assembly. Removing the clutch to check the springs is a lot of work, and I don't know how one would go about replacing just the springs anyway. This would mean its time for a new clutch.

Check the master and slave cylinders for any external leakage. If there was a small enough leak, the system could still push enough fluid to operate the clutch. Losing some of it to the leak reduces the distance the that the fork/release bearing would actually move, which would give the symptoms you described. It wouldn't go far enough in to fully disengage, and it wouldn't get pulled back far enough to fully engage. If they are leaking, they need to be replaced (it pays to replace them both, if one has failed the other is usually not far behind) They could also have failed internally. To diagnose that, you would need to take them both out and see if they displaced the same amount of fluid.

One last off-the-wall suggestion: Open up the hydraulic fluid reservoir, and pay very close attention to see if there is any vacuum or resistance to removing the cap. The reservoir should not be under pressure. I've had this exact issue before with a reservoir where the vent was clogged, which led to a vacuum in the tank. The cylinder didn't have enough displacement to overcome the vacuum. Clearing the vent fixed the problem

Sounds like you have an SAC (Self-Adjusting Clutch). Every now and then, as the clutch is wearing down, it will re-adjust to compensate for wear on the clutch.

Likely, your clutch is starting to age, and I find several reports on Google of others who have had this issue shortly before their clutch starts slipping. You might want to keep your eye open for the cheapest place to get a replacement clutch.

Not the answer you're looking for? Browse other questions tagged vw clutch jetta pedals or ask your own question.

3
Clutch catches VERY low, is this bad?
5
Clutch pedal on 1995 VW Golf is sticking
2
Clutch Catch Point Car Shudder?
4
Rattle at some point of clutch engagment when the pedal is coming up
2
Infrequently sticking clutch in 08 VW GTI
2
Mazda 6 2004 Clutch Pedal Will Not Return