I want to check if this particular 50 amp fuse on a RAV4 (1998 first generation) is blown or not. Just looking, it's hard to tell because of what I assume are blue-green deposits on copper (this is the view inside it with the cover removed): 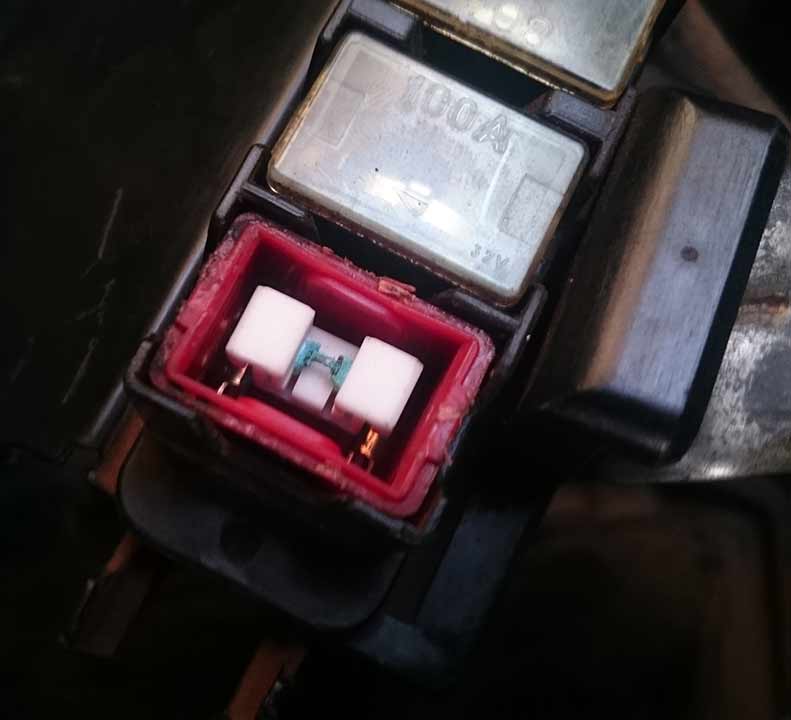 Normally I'd remove a fuse and test the two connections with a multimeter set to measure Ohms / resistance, but removing this is a non-trivial task - not only is the bolt holding it in place incredibly stiff, it's also holding the wiring together and I don't like the risk of re-assembling the wiring incorrectly or losing one of the many small parts like washers held with this bolt.

In theory, it looks like I could (after disconnecting the battery!) just use the multimeter's prongs to touch the copper visible on the left and right sides of the bottom of the fuse, and if it gives any reading, in theory that would mean the fuse hasn't blown. Some instinct however tells me that poking inside this fuse like this is a bad idea, or that it might not be as simple as it looks and those might not be points that are connected only by the fuse.

Am I worrying too much? Can I test this fuse without removing it as described?

Instead of Ohms checks of fuses I check for voltage with power on. Set your voltmeter to DC volts with the negative lead on the battery negative connector. With the positive lead test both sides of the fuse. If good it will read battery voltage on both sides. Most fuses have exposed metal tabs on both sides of the actual fuse section for this purpose.

On the fuses shown check for voltage at the small legs near the side of the case in the lower section of the picture.

If you can get to both sides of the fuse, see if you have power on each side. If you want to make sure, remove the battery terminal, and use an ohmmeter to measure the resistance between the battery terminal and the other side of the fuse. Should be zero or close to it. If so, it is good. With this type of fuse, when it blows, there is usually a large gap due to the amperage it takes to "blow" it.

To remove the fuses take the 3 bolts on the side out that hold the black cables to the fuse box, the loosen with a thin flathead on the front part of the fuse and lift. They come right out.

Not the answer you're looking for? Browse other questions tagged toyota fuse rav4 multimeter or ask your own question.

4
Making a 1st Gen (1998) RAV4's accessory socket always live - which relay and how to access it?
5
How to Test an Ignition Coil with a Multimeter
11
How to remove the 50 amp, 80 amp and 100 amp fuses from the positive terminal of a RAV4?
10
How to diagnose the cause of no power reaching the spark plugs when power reaches everything else, after checking fuses?
12
How can a fuse drain a car battery?
1
Car mobile charging point fuse
4
Low Beams Don't Turn on. Is My Relay the Issue?
1
Difficulty removing car radiator in 2001 manual 1.4l petrol Toyota Corolla
0
When adding third party accessories, does it matter if I ground them at the same point as existing wiring?