I bought a civic from a couple of girls who had previously said that they had a bit of trouble with the car overheating, but it never broke down on them. It had 120k miles on it and they were asking 2k, my mechanic noticed a leak from the radiator and assumed that was the cause of the overheating, so I bought it for 1800 and went to replacing the cooling system.

The coolant was very gunky in the reservoir and the engine, so we flushed it out, we replaced everything but the water pump, and it started overheating again. The people we bought it from had a piece of copper in the temp sensor so the fan was always running, and when we checked the thermostat the day after the fail safe was triggered and the valve was wide open.

It wasn't losing any coolant, asides from when we bled it, and there was still air coming out after many attempts to bleed it and it was never a constant stream. I'm looking for some advice on what could be going on here, any replies will be greatly appreciated.

At a guess? From your description I'd bet it has a blown head gasket. The only way to tell if this is so is to do a sniffer test (search for "block tester") at the radiator. There are testers which, when in contact with hydrocarbons, change color from blue to green to yellow. Here is an example: 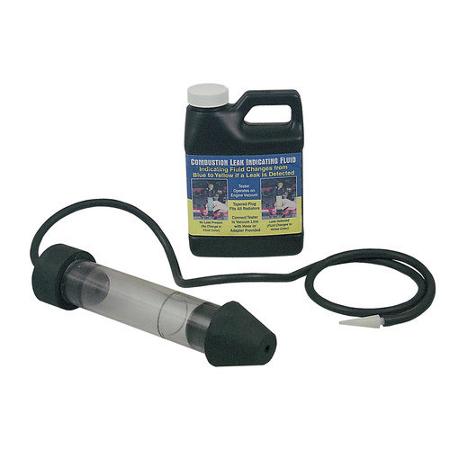 The only way the fluid will change color is in the presence of hydrocarbons (like I said), so if it changes at all, you know there is an issue.

Not the answer you're looking for? Browse other questions tagged engine honda civic overheating or ask your own question.

18
What is a leak down tester and what can I do with it?
5
Problem with Temperature rising after 30 minutes of driving?
5
Bubbles coming out of the radiator. Head gasket?