I have 2013 Nissan Rogue. I live in Toronto, Canada, so it is very cold here right now. I understand that cold temperatures can cause the tire pressure light to come on, but will it actually affect the reading if I use a pressure gauge (I think that's what it's called) to check the tire pressure?

For example, the recommended PSI is about 40 I believe. On Saturday, the tire pressure in all four tires was pretty low so I filled them all up to 41. Now, after leaving my car outside for about two hours, the tire pressure light came on when I started up my vehicle, so I manually checked the pressure with the pressure gauge, and they were all about 30. Is this due to the cold temperatures or do I have a problem with my tires?

All help would be appreciated. Thanks!

You can now calculate if the pressure drop makes sense. I've done it graphically: 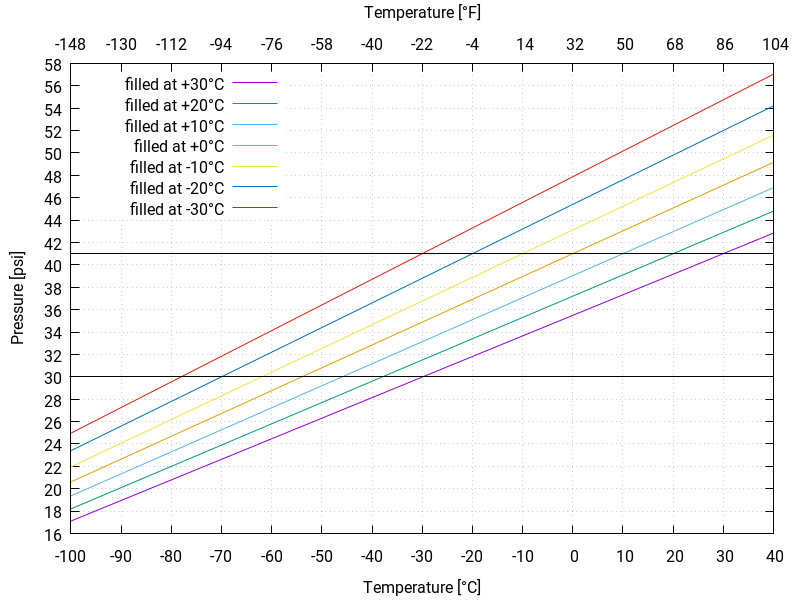 So 30psi is a bit low for just being an effect of temperature, if my values are correct. But measuring tire pressure sometimes is a little tricky (I mean get the pressure from the tire into the gauge). Temperature may also have an effect on the gauge, but I can't imagine it's that large. But who knows...

However, you also said that all tires behave the same way, so you don't have a problem with them.

The gauge does not need to be incredibly accurate, but it does need to be consistent, and precise. You can get the precision from a digital gauge and they are very cheap. I believe they are also consistent as long as you press down well enough to fully open the valve, and that there is nothing leaking out around the valve when taking the measurement. That at least will remove much of the measurement error.

If your 20 minutes of driving was at highway speeds for most of that, you might have gotten the tires 10 deg C warmer than when they have sat overnight. But if you were just driving around town at relatively low speeds, I would be surprised if you got more than a few degrees C. That's especially true if you're driving through snow since the snow will cool the tires quickly and keep your speeds low.

One thing you can try, while it's still really cold outside, fill the tires to 35 or 36 PSI when they are still cold from sitting overnight. Then if it gets significantly warmer, and the tires are warm from driving, you are still under the max pressure, and not so low that they are under inflated when it's really cold (since you filled them to 36 when it was really cold).

Hope that helps at least some!

2
Finding Cause of Slow Tire Leak 2001 Camry
3
lowest tire pressure for a 44psi tire
5
Which tire pressure is right for my 2008 Toyota Yaris's front tires?
3
Should I let air out of my tires?
4
Tire Pressure Sensor Sensor RF Frequency?
3
Cold weather tire pressure adjustment
3
How often to set tire pressure
1
Is the manufacturer's cold tire inflation pressure in regards to a constant value?
1
How does tire pressure vary as a function of temperature?