Possible cause of sudden breakage of windshield?

My father was driving at about 30/40 kmph with ambient temperature of about 30 degree Celsius, AC turned off, when the windshield shattered. I want to know the possible causes. I have nullified all the causes I could think of:

Edit: To make it clear, I'm adding an image, mine broke like the glass on the left: 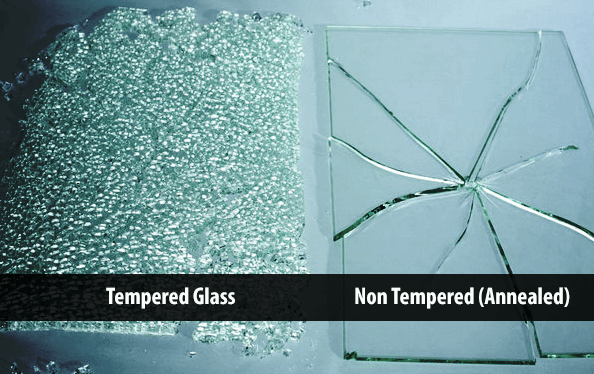 Glass breaks because of one reason: there is more stress on it than it can handle. Somewhere on the glass, there was a stress riser which formed. Wikipedia deems a stress riser (or stress concentration) as such:

A stress concentration (often called stress raisers or stress risers) is a location in an object where stress is concentrated. An object is strongest when force is evenly distributed over its area, so a reduction in area, e.g., caused by a crack, results in a localized increase in stress. A material can fail, via a propagating crack, when a concentrated stress exceeds the material's theoretical cohesive strength. The real fracture strength of a material is always lower than the theoretical value because most materials contain small cracks or contaminants (especially foreign particles) that concentrate stress. Fatigue cracks always start at stress raisers, so removing such defects increases the fatigue strength.

While without examining the windshield it would be hard to give the exact reason why it failed, obviously there was too much stress at some point in the windshield. This could have been caused by many different things. Something which happened previously may have setup the stress riser, then certain other factors may have caused it to fail after the fact. An example might be that your Father ran over a pot-hole which jarred the frame of the vehicle in just the right direction, which tweaked the windshield just enough. Then a bug hits the windshield and BANG, the windshield shatters. (I'm over exaggerating here, but you get the idea). Once that stress riser is setup, any little thing can make it happen. It could be that the glue used to set the windshield was a little thin in one area, which allowed metal from the windshield frame to make contact with the glass, thus setting up the stress point.

I could go on with an endless array of reasons. Hopefully I've given you some idea as to the why it could happen, though I doubt I have given you the exact reason why it did happen.

Not the answer you're looking for? Browse other questions tagged windshield or ask your own question.

0
The windshield are blurry, possible because of oils
7
What can cause excessive fog on a windshield?
4
Windshield repair
2
Lines on windshield in cold temperatures
1
Windshield leak
4
Old windshield chip
3
Difference between OEM windshield and aftermarket?
1
Is repair of stone chips on heated windshield possible?
0
Maintenance to improve dash cam quality