Some Opel Engines come with something called TwinPort Technology.
I guess that this increases power, as the original Z12XE (1.2) engine has 55kW, and the TwinPort (Z12XEP) version engine has 59kW of horsepower.

Why does it work?

Is this computer controlled?

What are the differences between the standard and Twinport engines?

Are there any disadvantages or other benefits of this system?

The Twinport Ecotech engine is the second generation of the GM Family 0 engine technology (also called Family Zero ... haha, could even be "Family Zed" in the right parts of the world, eh?). It works by having the ability to close off one of the two intake ports near the intake valve at low engine speeds, which speeds up the air entering the cylinder and causes a swirl of the air fuel mixture as it enters. This produces better low end torque. Coupled with advanced exhaust gas recirculation allows for better gas mileage without engine misfires (from the extra exhaust gas). As the engine speeds up, the secondary port is opened. Here is an image of how the air flows into the engine with (left) and without (right) the port open: 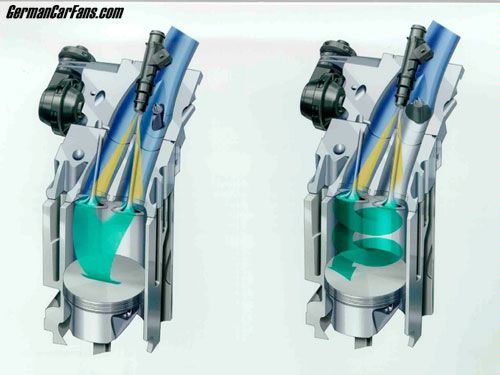 Since this should not affect high end horsepower output, I'd suggest the difference between the two engines is the compression ratio bump (10.1:1 vs 10.5:1 for the Twinport) and probably tuning. As a rule of thumb, every point of compression is worth approximately 3% change in horsepower, so that alone would not make up the 7% difference.

The new 1.2-liter engine also features a number of notable improvements over its already extremely fuel efficient predecessor. The Corsa's 1.2 TWINPORT ECOTEC with Easytronic has 5 hp or nearly 7 percent more power, yet needs only 5.3 liters fuel per 100 kilometers - 0.7 liters or around 12 percent less than the 1.2 ECOTEC offered to date. In conjunction with the 5-speed manual transmission, consumption is reduced by 0.3 liters (5.8 instead of 6.1/100km) or around 5 percent per 100 kilometers. At the same time, performance has been improved: the Corsa 1.2 TWINPORT accelerates from 0 -100 km/h in 12.5 seconds (down from 13 seconds), while maximum speed is 5 km/h higher at 175 km/h. The new 80 hp engine complies with the Euro 4 emissions standard and comes with a five-speed manual transmission. The Easytronic automated manual transmission is available as an option.

Not the answer you're looking for? Browse other questions tagged engine gm ecotec or ask your own question.

26
Is Start & Stop technology good or bad for my car? (Alfa MiTO)
15
Diesel vs Petrol motorcars. Pro's and cons?
10
Why does the power output peak and then drop as engine speed increases?
3
Replace 2003 Highlander engine w/Avalon or Camry?
11
Why don't all diesel engines have throttle plates?
19
Why did Ducati decide to use the desmodromic valve train rather than a more tradition valve train?
26
What actually happens when there is way too much oil in a car engine?
4
06 G35 Coupe Engine Compatibility