An exhaust-driven forced-induction device that increases an engine's power output and efficiency.

A turbocharger (technically a turbosupercharger) is a type of forced-induction device used to increase the power and efficiency of an engine. It works by using the engine's exhaust flow to drive a turbine, which powers a compressor, which forces more air into each cylinder than would otherwise be able to enter. The increased amount of air allows more fuel to be burned, increasing the engine's power and allowing for the use of a smaller, lighter engine. As the air entering the cylinders is already precompressed, the functional compression ratio of the engine increases (although the compression ratio within the cylinders themselves is typically decreased slightly), making the engine more efficient.

Originally, turbochargers were seen only on racing vehicles and top-end sports cars; nowadays, however, many automobiles use them due to their power and efficiency advantages. Some holdout manufacturers still produce internal combustion vehicles without turbochargers.

Image of a turbocharger 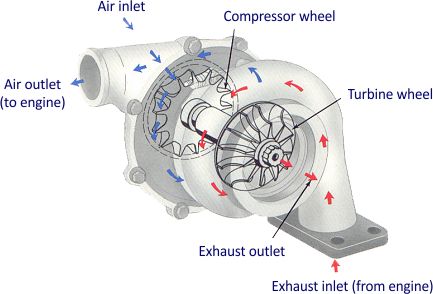 Why do we need to cool air after it leaves a turbocharger?