The Toyota RAV4 is a sport utility vehicle (SUV) produced by Japanese automobile manufacturer Toyota. It was the first compact crossover SUV, making its debut in Japan and Europe in 1994 and in North America in 1995. The vehicle was designed for consumers wanting a vehicle that had most of the benefits of SUVs, such as increased cargo room, higher visibility and the option of full-time four-wheel drive, along with the maneuverability and fuel economy of a compact car. Although not all RAV4s are four-wheel drive, RAV4 stands for "Recreational Active Vehicle with 4-wheel drive" because the aforementioned equipment is an option in select countries. The early success of the RAV4 paved the way for competitive compact crossover-SUV's such as the Ford Escape and the Subaru Forester. 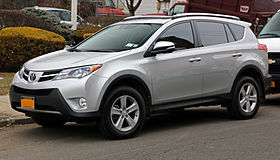 Accelerator pedal stuck briefly - how to make sure it doesn't happen again?

Accelerator pedal stuck briefly - how to make sure it doesn't happen again?