The Mustang is an American automobile manufactured by Ford, which has been in continuous production since march 1964.

The Ford Mustang is an American automobile manufactured by Ford. It was originally based on the platform of the second generation North American Ford Falcon, a compact car. Introduced early on April 17, 1964, and thus dubbed as a "1964½" by Mustang fans, the 1965 Mustang was the automaker's most successful launch since the Model A. The Mustang has undergone several transformations to its current sixth generation.

The Mustang created the "pony car" class of American automobiles, sports car like coupes with long hoods and short rear decks, and gave rise to competitors such as the Chevrolet Camaro, Pontiac Firebird, AMC Javelin, Chrysler's revamped Plymouth Barracuda, and the first generation Dodge Challenger. The Mustang is also credited for inspiring the designs of coupés such as the Toyota Celica and Ford Capri, which were imported to the United States. 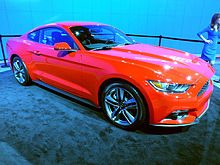 1996 Mustang GT won't start with shifter in Park, but will start in Neutral

2006 Mustang GT: Left car for 1 week, no power when returning

Can you run an engine with an acorn shell in one of the cylinders?

Does an Engine Strut Bar have any effect on performance?