The Ford Fusion is a mid-size car produced by Ford. Introduced in the 2006 model year, the Fusion is manufactured at Ford's Hermosillo Stamping & Assembly.

The Ford Fusion is a mid-size car produced by Ford. Introduced in the 2006 model year, it placed second in a Car and Driver ranking of top-selling mid-size cars, which described it as "Not your father's Taurus" The 2010 model was awarded the Motor Trend Car of the Year and its hybrid version won the 2010 North American Car of the Year Award. The Fusion is manufactured at Ford's Hermosillo Stamping & Assembly where the similar (and now discontinued) Mercury Milan and the Lincoln MKZ were also built. All three cars utilize the CD3 platform. 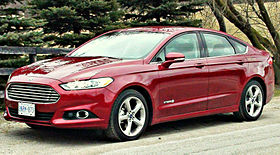 Production on the first Fusions began on August 1, 2005. The Fusion replaced the Mondeo for the Latin American markets—except in Argentina (where the current European Mondeo is available) and in the United States and Canada (where it superseded the then mid-size Taurus). The Fusion is positioned between the compact Ford Focus and full-size Ford Taurus. In the Middle East, this model is sold alongside the Mondeo. Versions sold there are available only with the 2.5-litre engine. Unlike in the United States, Canada and Latin America, no V6 engine is available in that region. The same is true in South Korea, where only the 2.5-liter engines (including those for the hybrid model) are available as of the 2012 model year.

The second generation line-up includes a gasoline engine option, an EcoBoost engine option, a next-generation hybrid model, and a plug-in hybrid version, the Ford Fusion Energi, making the Ford Fusion the first production sedan to offer these four options. Sales of the gasoline-powered and hybrid versions began in the U.S. in October 2012 under the 2013 model. Sales in Europe and Asia, as Ford Mondeo, are expected to begin in 2015, along with South Africa, where the Fusion name will be used. Deliveries of the Fusion Energi began in the U.S. in February 2013. The entire 2013 Ford Fusion line-up was awarded with the 2013 Green Car of the Year at the 2012 Los Angeles Auto Show.

Is this the ATF drain plug on 06 Ford Fusion (please confirm)?

How are the rear headrests in a 2010 Ford Fusion removed?

My lambda sensor has a collar around it, I can not see how to unscrew it. (2009 Ford Fusion)

In Toyota Prius and Ford Fusion Hybrids, at what max speed can it go with only Electricity?