The Ford Expedition is a full-size SUV built by Ford. Introduced in 1996 for the 1997 model year as a replacement to the Bronco, it was previously slotted above the smaller Explorer. It is Ford's largest and last truck-based, off-road and tow-capable SUV.

The Expedition is based on the Ford F-150 pickup and shares various components. It comes in a regular-size and in the longer EL/Max version (2007–present) that replaced the Excursion which was discontinued in 2005.

The Expedition is the third Ford vehicle to use the "Expedition" name, as it was originally used on a 1992 concept vehicle, the F-150 Eddie Bauer Expedition.2 The name was subsequently and briefly used for one of the Ford Explorer Sport (two door)'s trim levels during the 1995 model year, before applied to this SUV for the 1997 model year. Expeditions were originally built in Wayne, Michigan. In 2009, Ford shifted third generation production to Louisville, Kentucky, and converted the Wayne assembly plant to build the Focus. A refreshed third generation arrived to dealers in July 2014 for the 2015 model year. 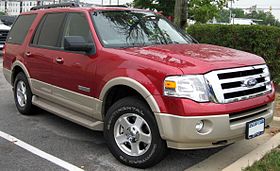 How to tell if the Control Arm is bad too, or just the ball joint

Engine won't rev past 2500 in Park/Neutral

Can I remove the valve cover to retrieve the extension with 8mm socket that fell into my engine?

Ford has proper fuel pressure and spark but won't start

looking to buy a 2000 ford expedition with broken ignition. it doesn"t run but running prior. how do i repair it