The Ford Escape is a compact crossover vehicle sold by Ford since 2000 over three generations.

The Ford Escape is a compact crossover vehicle sold by Ford since 2000 over three generations. Ford released the original model in 2000 for the 2001 model year—a model jointly developed and released with Mazda of Japan—who took a lead in the engineering of the two models and sold their version as the Mazda Tribute. Although the Escape and Tribute share the same underpinnings constructed from the Ford CD2 platform (based on Mazda GF underpinnings), the only panels common to the two vehicles are the roof and floor pressings. Powertrains were supplied by Mazda with respect to the base inline-four engine, with Ford providing the optional V6. At first, the twinned models were assembled by Ford in the US for North American consumption, with Mazda in Japan supplying cars for other markets. This followed a long history of Mazda-derived Fords, starting with the Ford Courier in the 1970s. Ford also sold the first generation Escape in Europe and China as the Ford Maverick, replacing the previous model. Then in 2004, for the 2005 model year, Ford's luxury Mercury division released a rebadged version called the Mercury Mariner, sold mainly in North America. The first iteration Escape remains notable as the first SUV to offer a hybrid drivetrain option, released in 2004 for the 2005 model year to North American markets only.

Mainstream production of the first generation Escape/Tribute ended in late 2006. For Asia-Pacific markets, both received respective facelifts in 2006 and had production fully transferred to Ford Lio Ho in Taiwan. Extended production of the Mazda lasted until 2010, with the Ford lingering on until 2012. 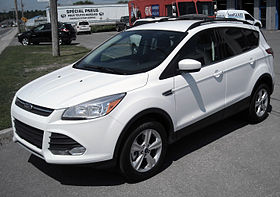 Can a crankcase venthilator hose being off cause misfiring?