The Honda CR-V is a compact SUV, manufactured since 1995 by Honda.

The CR-V is Honda's mid-range utility vehicle, slotting between the smaller HR-V and the larger Pilot. 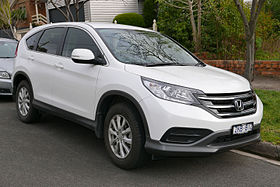 Do cars go from Drive to Neutral on their own?

Will running engine after replacing A/C components ruin the new compressor before system is recharged with freon/oil?

What type of tool has more strength? CR-V (Chrome Vanadium) or those black color tools?