A car is a wheeled, self-propelled vehicle. Normally, a car has 4 wheels and is designed for the transport of passengers. Depending upon locale, cars may also be called 'autos.'

While the definition of a car may seem mundane, care for definition must be taken when one considers that a car may have three wheels (such as the first car developed - below). 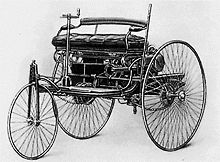 Another distinctive feature of the car, at least within the US, is that a car generally builds a cockpit-type frame that protects the driver (also cage). Contrast that with the "cage-less" design of three-wheeled motorcycles such as the Can-Am Spyder.

If I am just replacing the car engine, do I need to replace the odometer as well?

Are car batteries meant to be disposable or are they re-chargeable?

What is the small metal square attached to the wheel or tire?