It just doesn't work, as if I weren't even pressing it and it happens regardless of the speed. I have to turn the engine off and on again and it'll work for another 3 or even up to 20 minutes sometimes before failing again.

I've changed the oil and gas filters and all the four spark plugs, as well as the oil. I've also cleaned the injection system and the problem is still present. I use unleaded fuel only at 88 octanes.

By the way the catalytic converter notice led is always turned on, and it only turned off like 2 minutes after I changed the sparks and it hasn't turned off since.

My car is a German Chevrolet Corsa 2002.

I've just noticed that the revs get stuck right at the moment the issue occurs. i.e. if I'm driving at 90 Km/h and I shift gears, the pedal will stop responding and the revs will be stuck at ~2000-2500 until I apply the solution mentioned above (turning off an on the engine).

Edit II: Thanks to all that have commented, after many years of intermittently trying to figure this out, the issue was a missing ring that goes on the driver side of the wheel axle, it cost me about $15 USD but it was very hard to find (because my car was assembled in Germany and the only Corsa parts around here are for the model that was assembled in Brazil). I don't know how it's called but it's like a small golden dented ring that just sticks to the axle and without it the speedometer doesn't work (the speed needle would just stay at 0.) 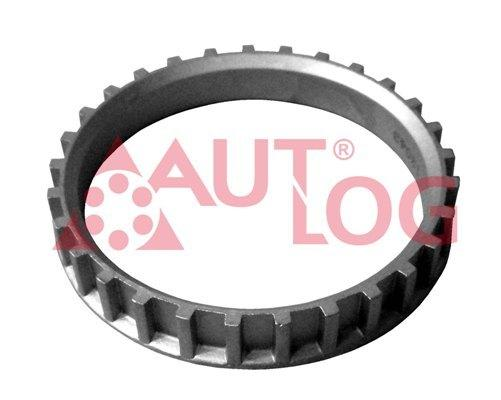 But the site says it's an ABS sensor ring though...

That was it, I just put it and drove like 100 Km without issues.

I'm betting your Corsa is Drive-By-Wire (DBW), meaning, there isn't a direct connection between you and the throttle. If so, the gas pedal rheostat is probably telling the computer you are pressing it, causing the throttle to go up and in some cases not respond at all. You could possibly test the gas pedal by unplugging it and checking for even/smooth operation by putting an ohmmeter on the leads. You may also try tromping on it a couple of times with the engine off. If you want to send reset the CPU, you need to let it sit for ~30 mins to ensure the residual power is gone. This is the first thing I would have tried as well.

With the car off, go under the hood and look near your air filter housing. Follow the large hose that it is connected to until you see the throttle body. Try manually moving the throttle lever. This is what your gas peddle would do anyways.

Also try using two people, one to be in the car pressing the gas peddle, and one to see it the lever rotates at all. If all checks out, investigate your throttle position sensor. The TPS can be a cause of engine stalling while driving or idling.

I had the same issue. My 2005 Vibe would always start, but would only run at low idle and depressing the throttle had no effect. There was no acceleration from the engine. Checking the fuses, I found the 10A fuse for the throttle control module TCM was blown. I replaced the fuse and it works fine.

I realise its not exactly the same problem, however it has the symptoms above and is pointing to the throttle control module as causing the issue.

Facing this issue on my Ford Figo Diesel Hatchback. Again it has Drive by Wire, and the garage suspects some rats have had a go at nibbling the wiring. Quite possible because where i park at home there are rats around. Will get it rectified and let yáll know. Thankfully as mine is a diesel torque bomb, even on idling rpm the car chugs along sufficiently to limp to the garage.

Not the answer you're looking for? Browse other questions tagged engine chevrolet fuel-injection or ask your own question.

6
Chevrolet Corsa doesn't accelerate until I restart the engine
3
VW Golf 2001 Mk4 Diesel ASR Engine Problem
2
Car shuts off right after cooling fan turns on
5
Machine turns off randomly and won't start after staying off for a while
7
2015 Honda Mobilio - Car shakes when started
3
No acceleration until depressing gas pedal some more, OBD shows P0170