Need clarity on the penny test

On 3 of my tires, the penny just won't stand in the tread. The gap in the tread is too wide for the penny to stand. Does that matter? 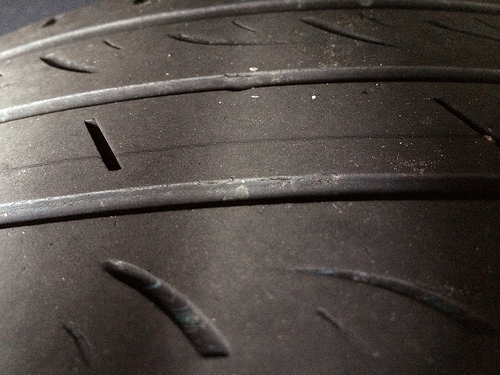 In case of the 4th tire, the penny goes in to some degree. This is a new tire. I suppose this tells that the penny is good. 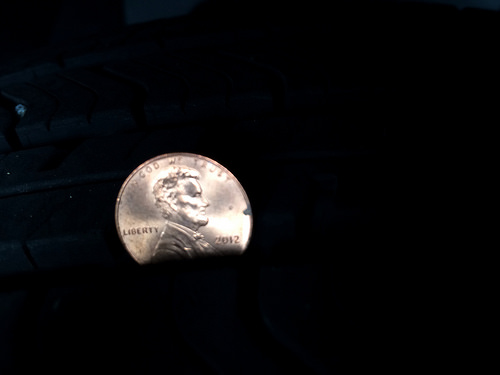 This weekend, I am planning to take it to a tire store, but I want to be armed with some knowledge, before going there. I drive about 13 - 15 K miles per year. This van was purchased on 31-Dec-2012 and the dealer told me it was a vehicle that was owned by car-rental company. The dealership said, they put brand new tires on it. I have had a few alignment issues in the beginning of 2014 and that's the reason one tire is newer than the others.

Do I need to replace the other 3 tires, where the gap between the treads is considerable?

You are actually using the penny the wrong way. Abe's head should be pointing down. You are looking to see if the depth of the tread goes up past his head. I believe the depth is supposed to be 3/32" or more to be good. The penny test is just rule of thumb. If the top of Abe's head is anywhere close to being seen, you probably need new tires. You are not looking to see if it will stand up, but that of the distance of the thread to the base of the groove. Use this at the least tread, not the most tread.

3
Help deciphering the penny test
11
What could be a likely cause of unusual “torque steer” after repairs?
1
my tire is wobbling and I need to know possibilities!
3
How long after plugging a tire before I test it?
8
Is there a way to test a failed tire to make sure it meets specs?
12
Do I Need To Change the Tire If the Sidewall Is Damaged Like This?
2
do i need to replace the tire
2
Does my tire need to be replaced?
1
Do I need to replace the rim?