Seized lug nut, Stud came loose from the hub, Wheel still on. How to remove?

How I got here:

I replaced the front axle (steering) U-joints in my 1997 Jeep Wrangler, as one had gotten loose. The other looked okay, but when I pressed it out, it was rusty on the inside as well, so not far behind. Anyway, that job went well enough, and it all went back together nicely.

I finger-started the lug nuts to make sure they weren't cross-threaded, then zipped them on with an impact, and finished with a torque wrench. The impact consistently stopped about 1/8 turn short of fully torqued. Didn't see a problem there.

Drove around the block to let things wiggle into where they're going to be, and re-tightened everything. I put the castle retainer over the axle nut, and went to take the wheel back off so I could put the cotter pin in it.

Instead of zipping off like the others, one of the lug nuts turned only a few times and jammed. In trying to un-jam it, the stud came out of the hub, with the nut still seized on it. 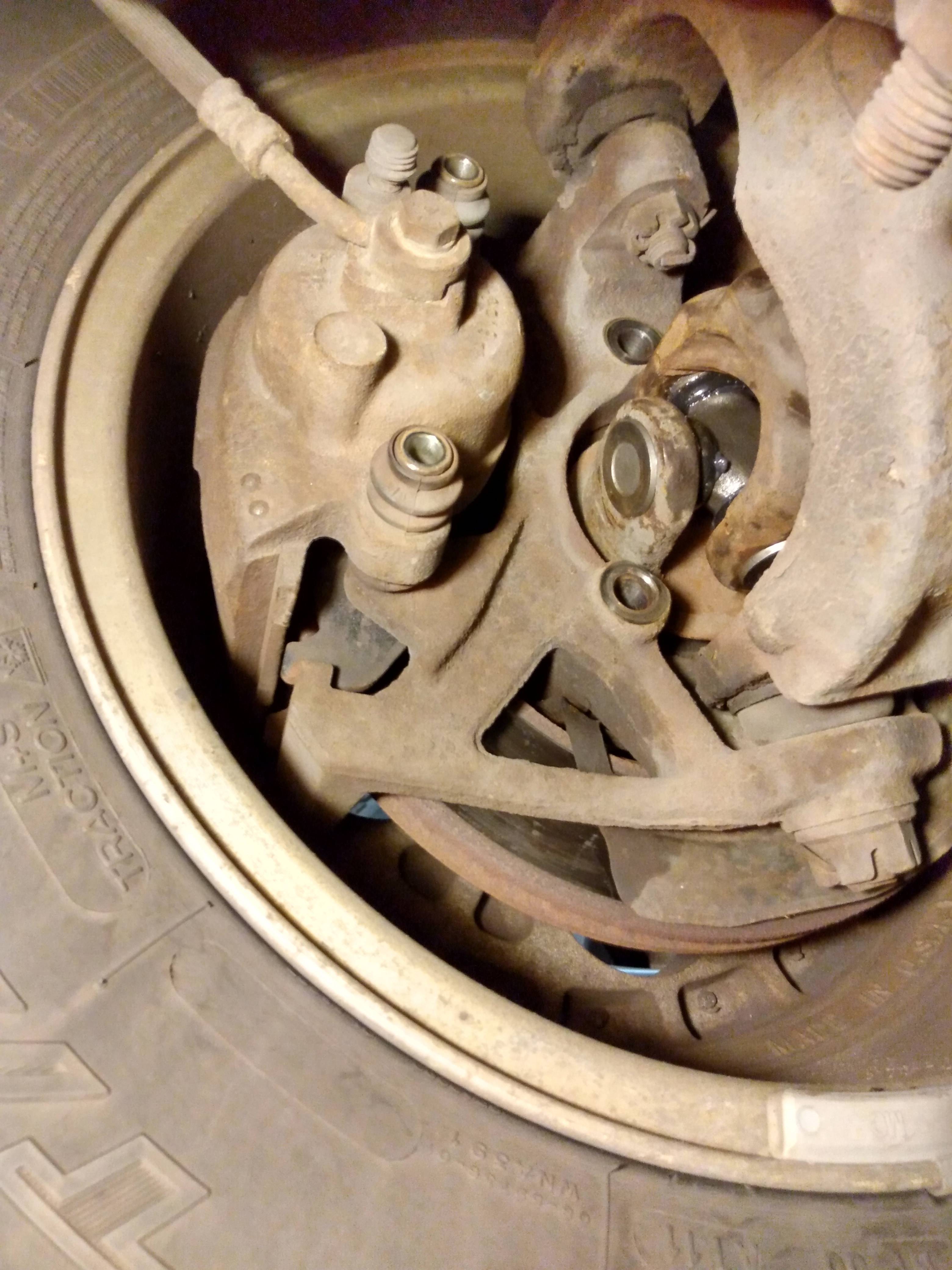 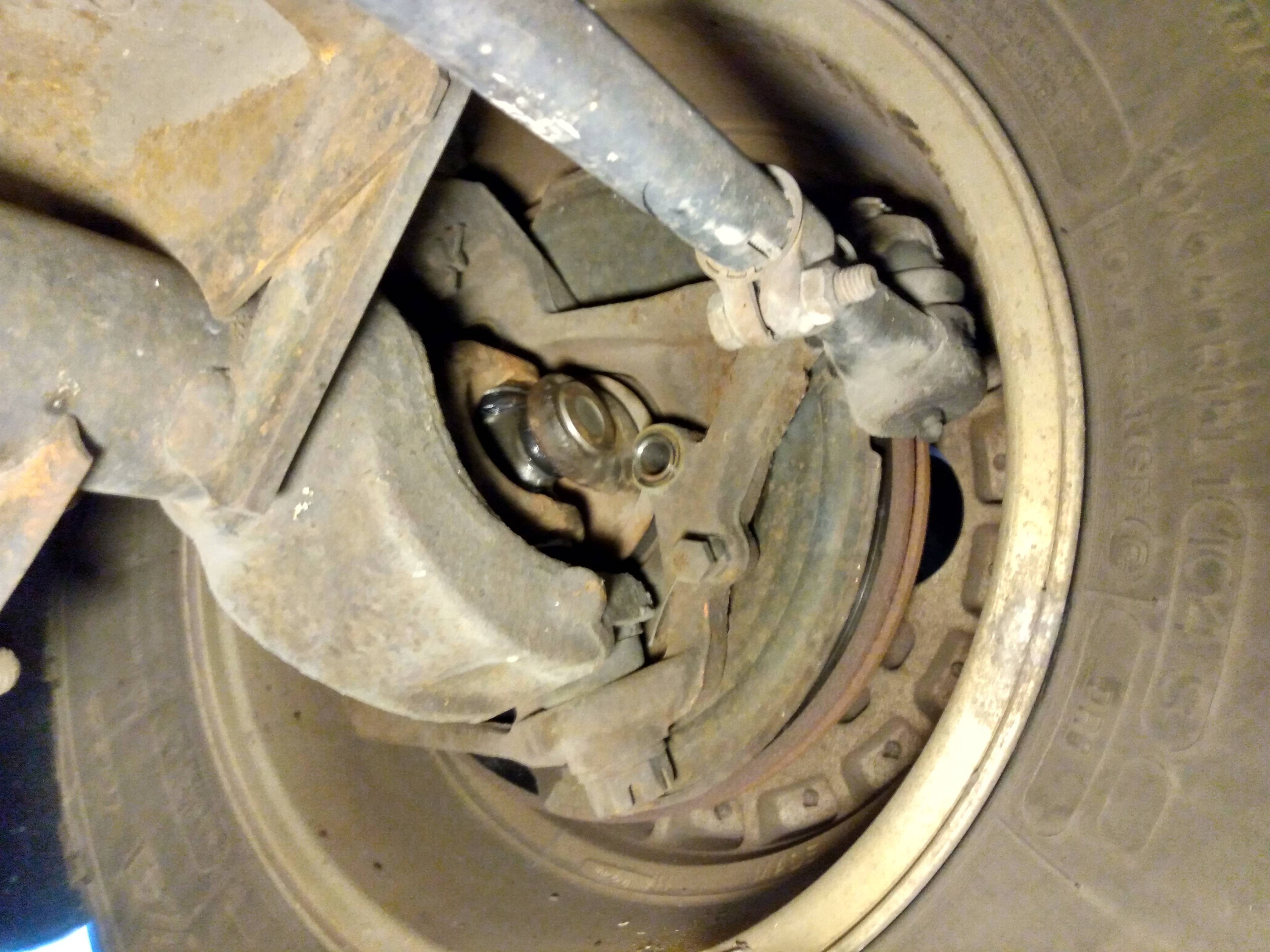 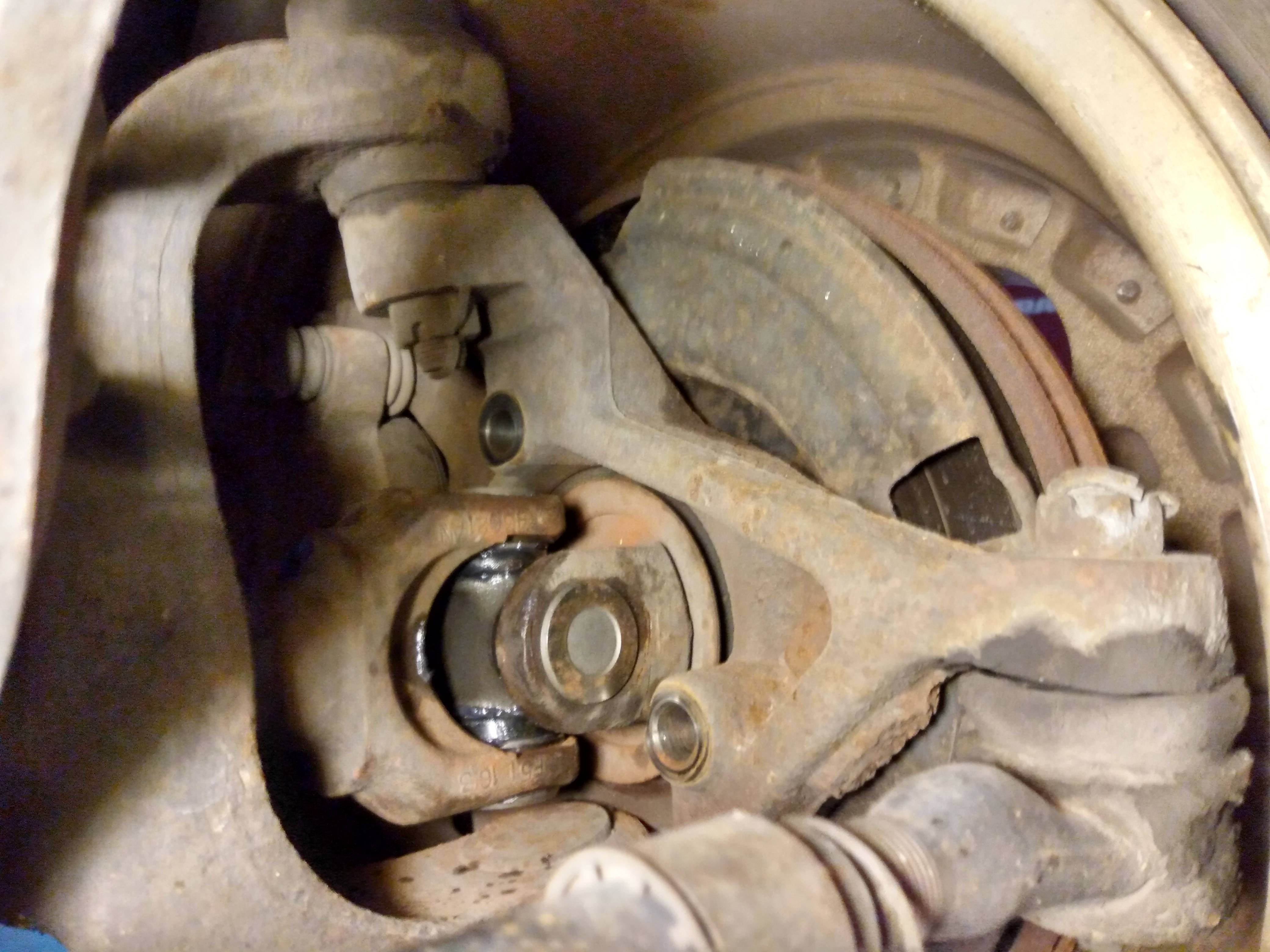 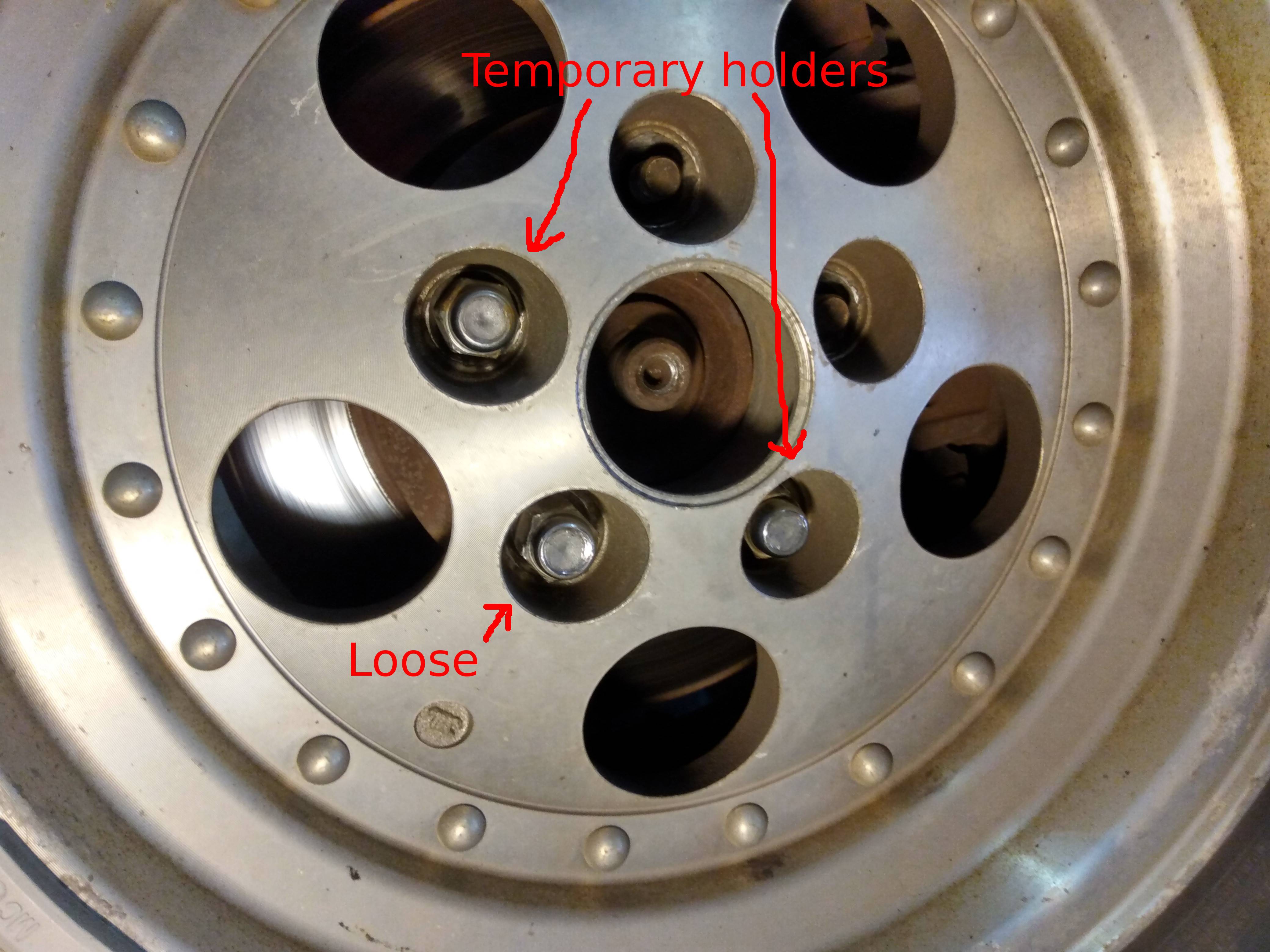 There's this answer to a similar question, that says to protect the area and drill the nut out. Then remove the wheel and repair the stud as usual. I can see that working, but is there a way to do it that doesn't risk collateral damage or wear out an expensive (big) drill bit?

I see two possible methods and both require patience and a rich vocabulary.

The mill method is a dangerous method, the mill bit can jam between the nut and the rim, therefor I would prefer a weaker tool (perhaps a dremel). 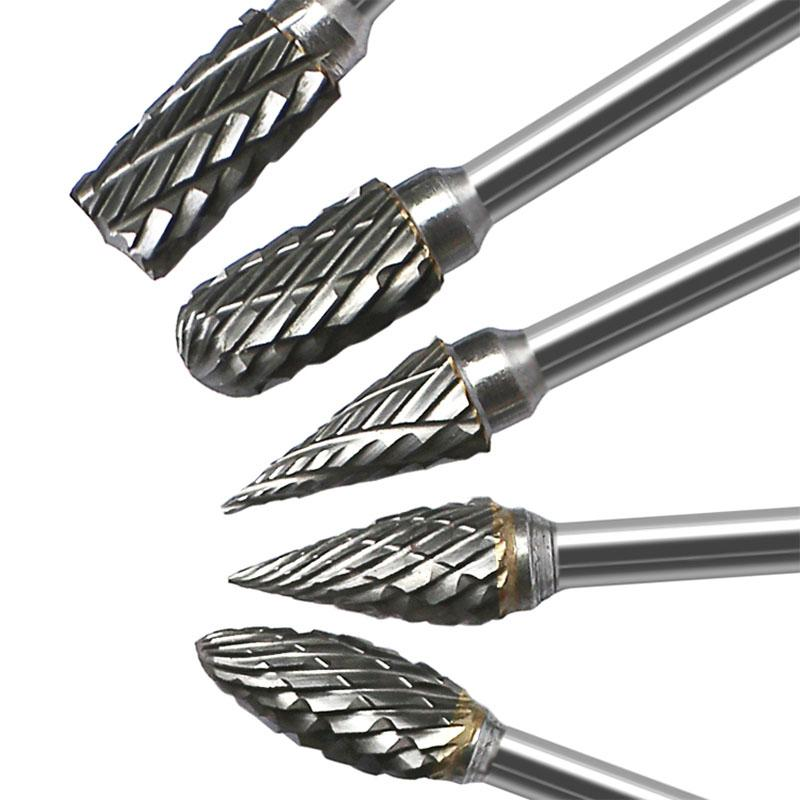 I did end up drilling it...among other things. :-/
And I broke a few bits and dulled some more in the process, even with oil. (studs are HARD!) 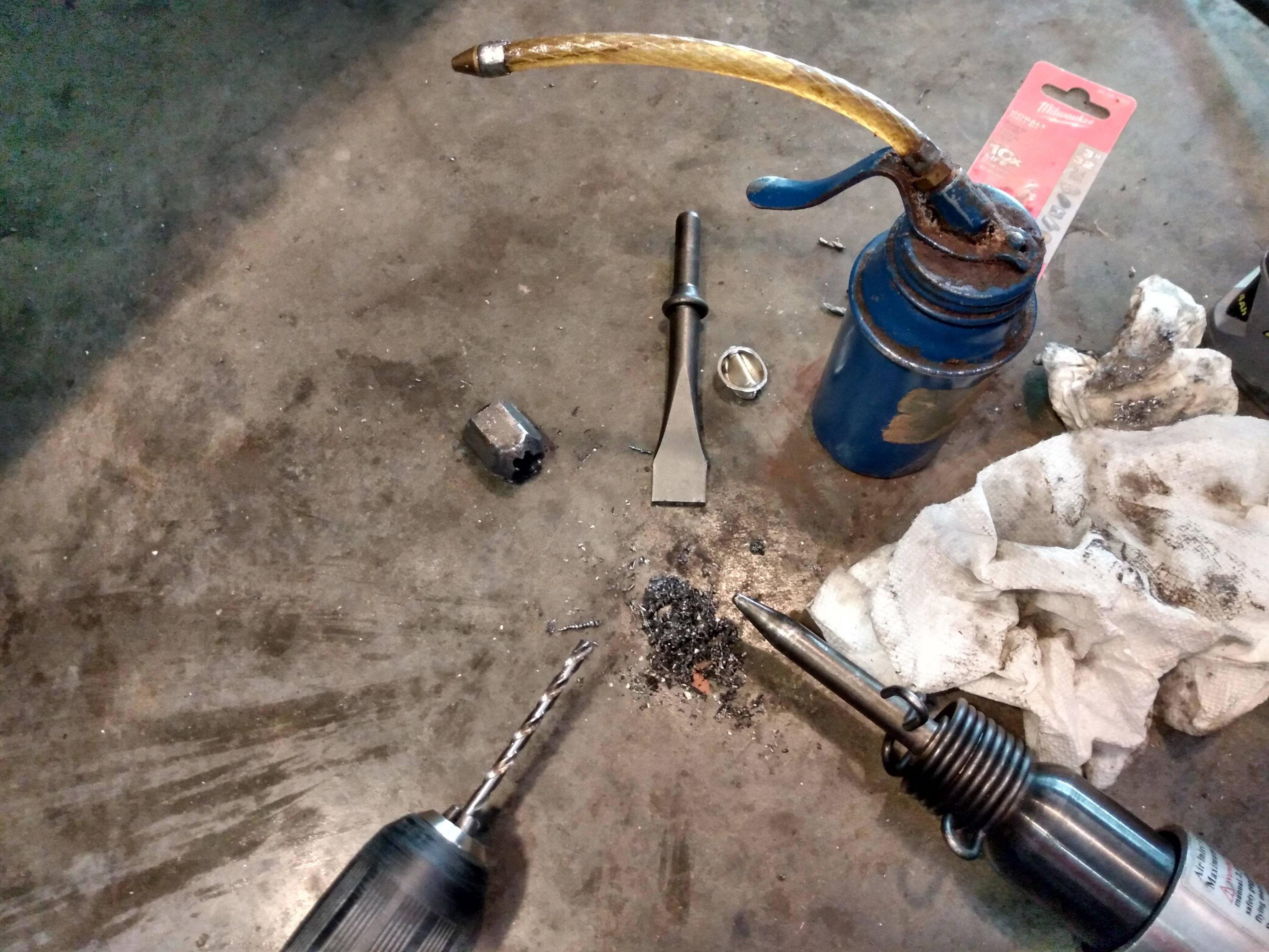 What seemed to work best was to use an air hammer with a round pointed chisel, first as a center punch for a small-ish drill, and then as a wedge to expand that hole further. Do that all the way around the edge, so it annihilates the threads, and it eventually came off. 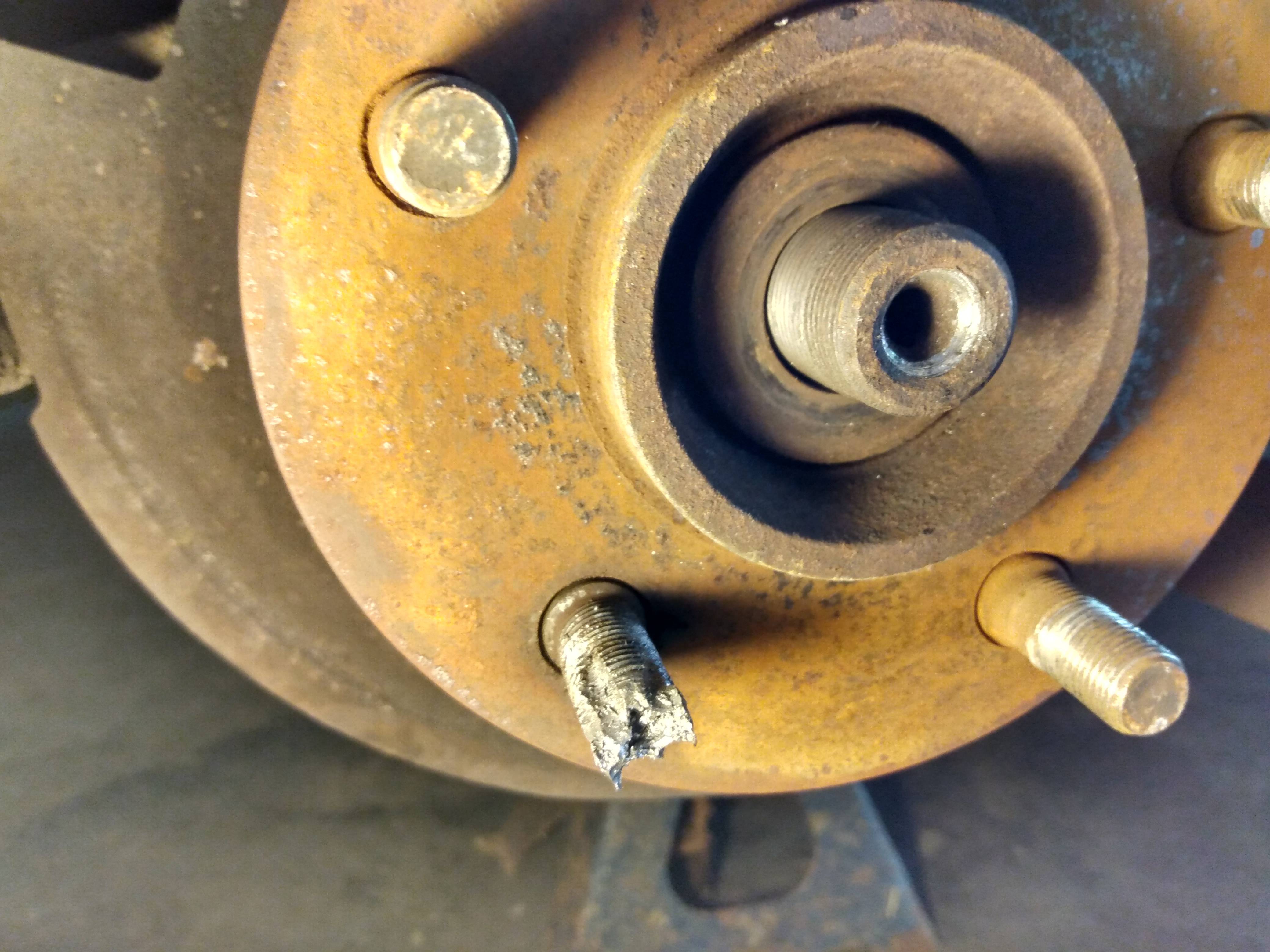 (I set it back in for this picture. The air hammer kicked it out as soon as the nut let go.)

Try to drill in parallel to the stud, so that it does attack the threads all the way down. 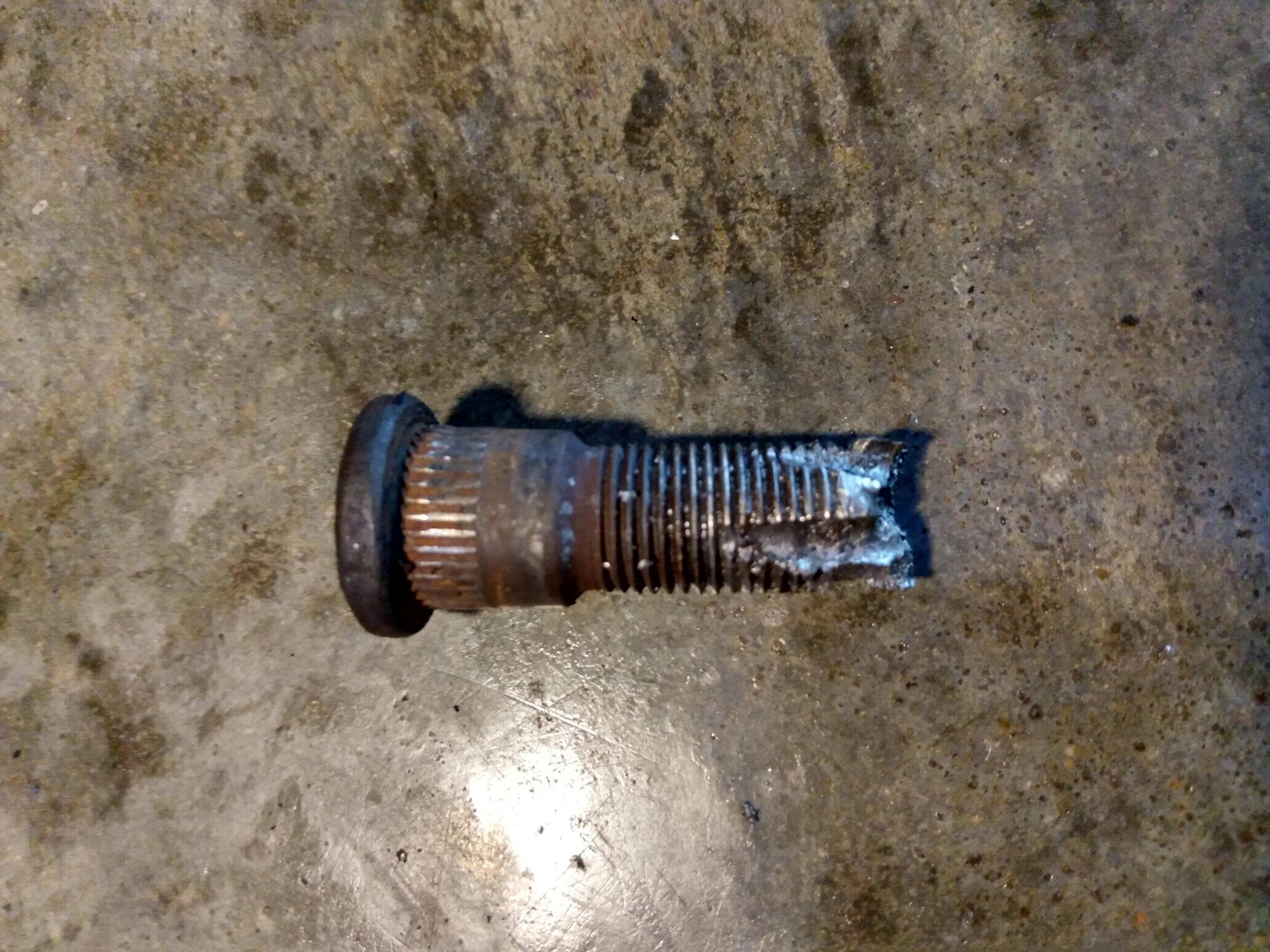 It also helps to wedge something between the nut and the recess in the wheel, so the drill doesn't just spin the whole assembly. A large-ish punch works well, and just a few taps with a hammer is all it needs. You only want to have it there, and to not fall out, not necessarily pushing anything.

And here is what the wheel looks like afterwards. Cleaned up, of course. There was a mess of oily chips in it when I finally got the nut loose. 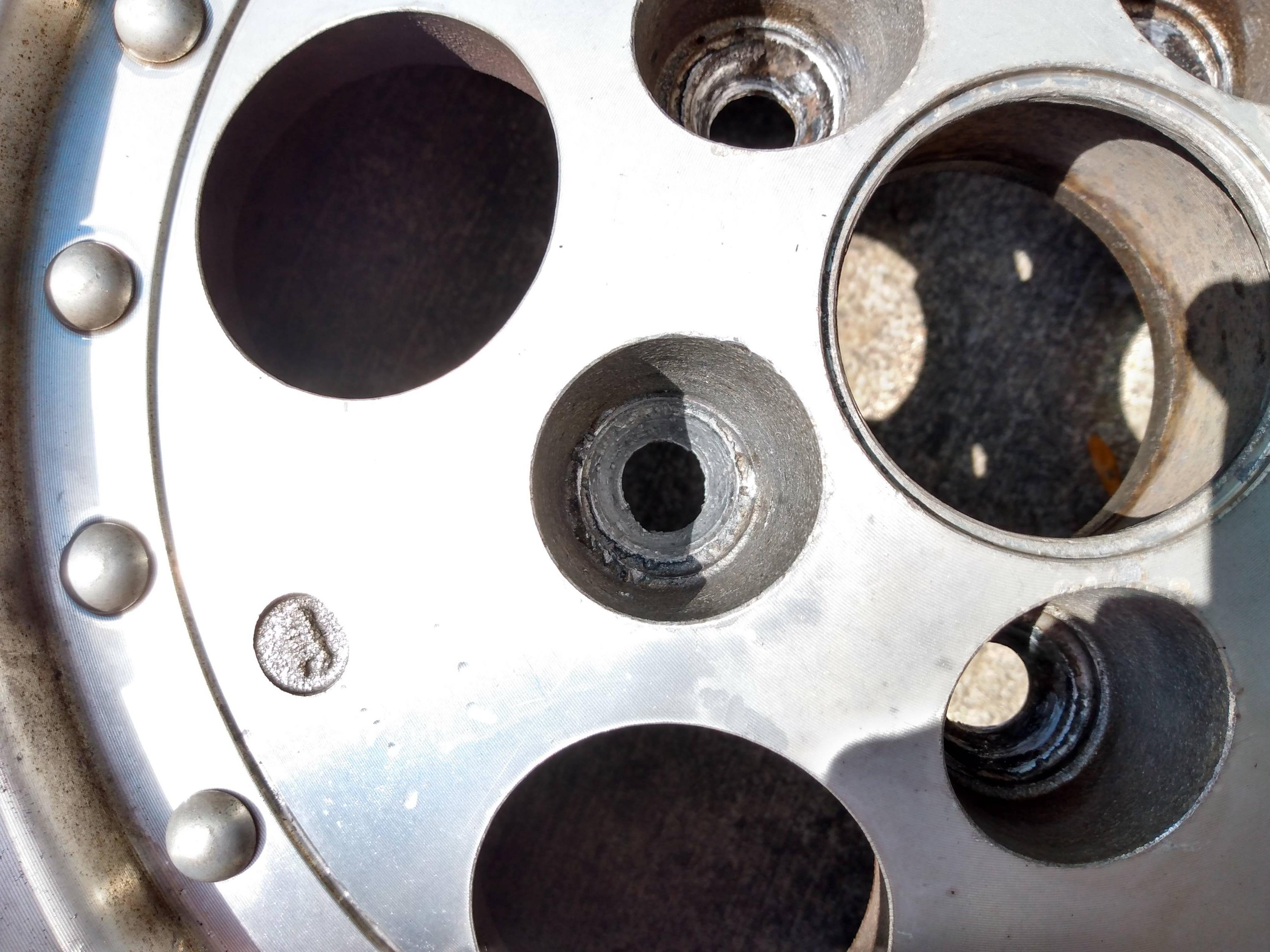 Looks like I might have just nicked it a little bit with the drill, but not enough to make a difference.

As a side note, when pulling in the new stud, it works a lot better to squirt some WD-40 on the threads!

Normally, I don't recommend WD-40 as a lubricant, because it evaporates quickly and you're back to where you started. (it's actually designed to do that: Water Displacement, formula #40) But in this case, I wanted that. Pull the stud in, and then later have the correct torque apply the correct pressure.

My first thought would be to crack the nut, you won't get a regular nut splitter in that recess though, and specialist equipment is going to cost more than a drill bit. You could try chiseling it to crack it, I don't think that is going to work that well again due to the deep recess, you could end up damaging the wheel when you attack the side of the nut.

My approach would be to find a way to hold the stud in place firmly enough to spin the nut off. If there's a gap behind the nut you could try gripping the stud, I suspect there's not enough there. Another option could be to put pressure on the stud so that there's friction against the hub, preventing it from turning. It's hard to tell if there's enough play to make that work.

The approach I would probably take is to use my rotary tool with a metal cutting disc to cut the top of the nut off so I can access the stud behind. I would then use the disc to cut a groove through the middle so I can get a flat bladed screwdriver into it and hold the stud in place, then vise-grips to spin the nut. A brand new disc would probably not fit, this is why I keep mostly used discs around: they are great at fitting into cramped areas. You could also chisel the top off or drill a hole through the top as well. Just make sure to protect the wheel!

4
Does a snapped in half lug nut stud need to be replaced if a nut still goes on?
4
Can lug nuts be tightened with a powered non-impact driver plus torque wrench?
39
How do I remove a destroyed lug nut?
1
Can broken wheel hub stud cause other wheel hub stud to break?
0
Recommendation For Tightening Wheel Stud
2
need to remove a broken lug nut: thinking die grinder?
1
broken lug bolt - nut still on - can't remove wheel