I've got a diesel engine in my boat, but the previous owner had somehow snapped the alternator bracket, and fitted it fixed to the boat rather than the engine. Now the alternator doesn't move when the engine rocks putting strain on the belt. The belt then stretches, so I have to adjust the alternator until the belt is tight. Repeat until belt snaps and fit another belt.

Making an engine bracket is out of the question at the moment as it would require welding a bracket to the engine casing, and it's not practical at the moment.

I was wondering about making some sort of DIY spring tensioner. The Belt runs parallel to a wooden 'wall', with a clearance of about 4 inches. I was wondering if I could attach some sort of device to the wall to intercept the belt at a right angle, (with a wheel / spring combo) and apply pressure to the belt to take the strain of the engine rocking when running.

Has anyone any idea how I can do this? I'm not sure what the parts would be called and I've searched the web to no avail.

I suppose it's something like this with a custom arm and a wheel for the belt to move in but I'm not great a mechanics to be honest. The link looks like a heavy duty one from America, but I'm after something I can make up cheap from a shop in the UK.

Here are some photos 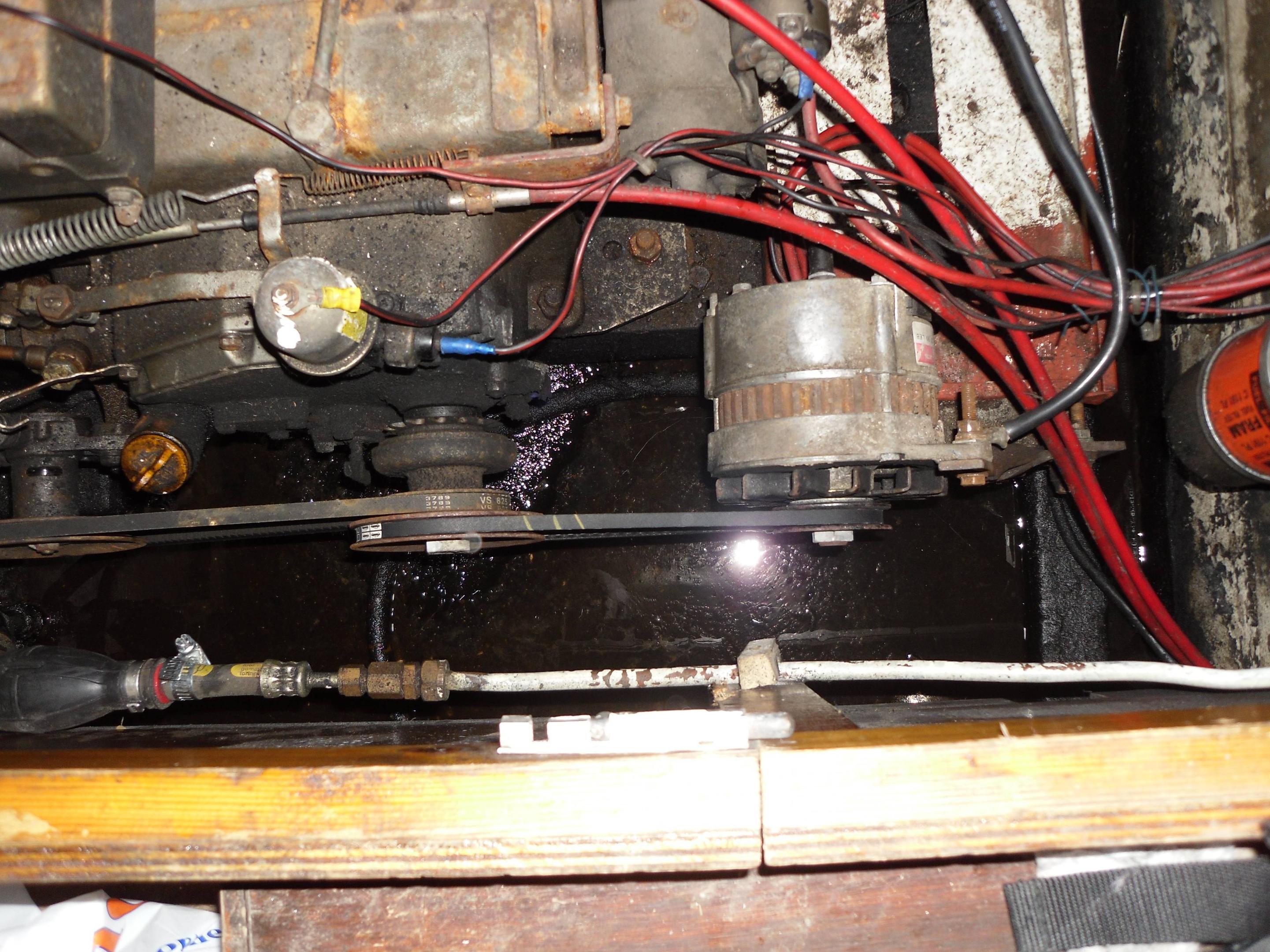 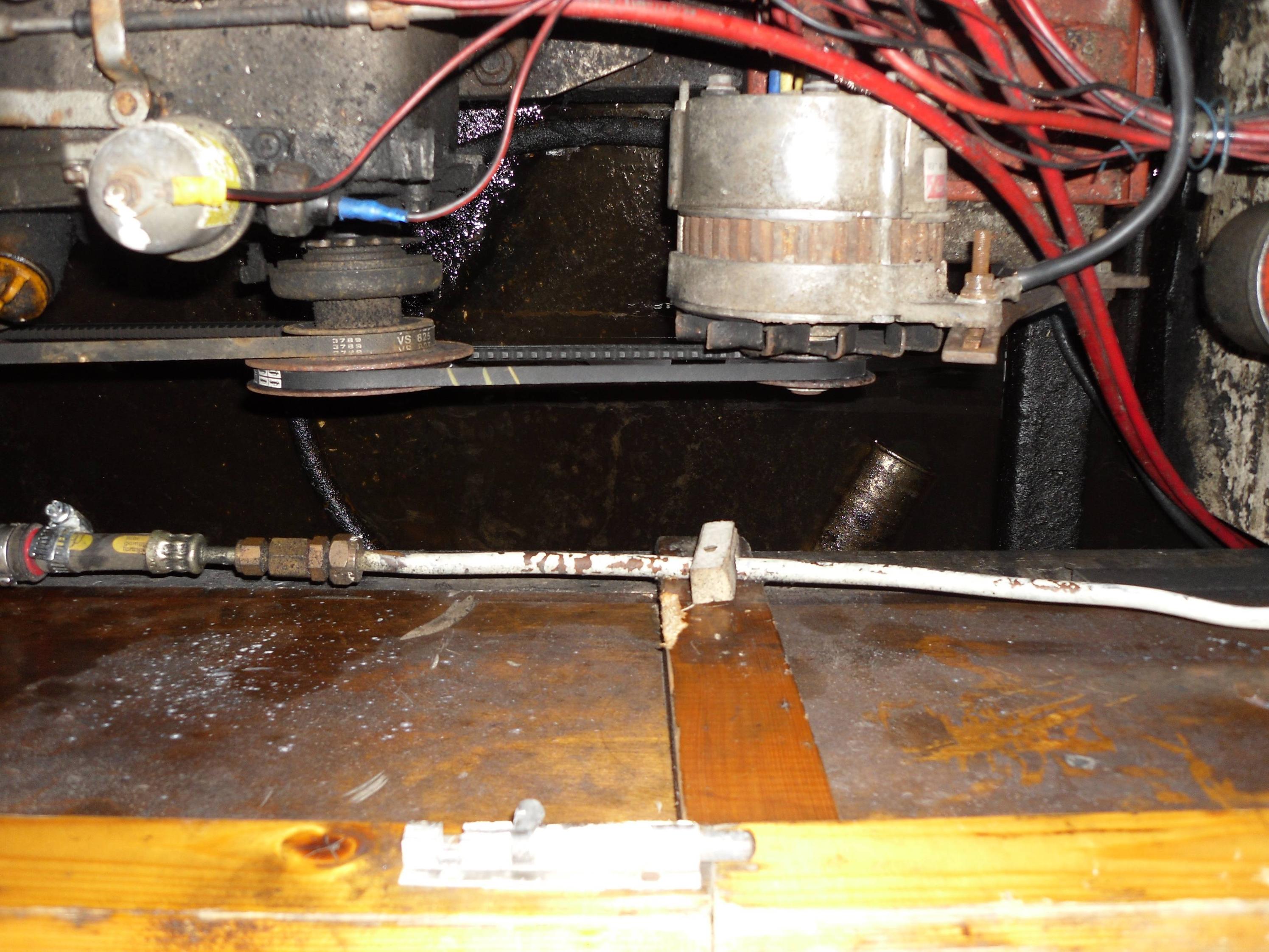 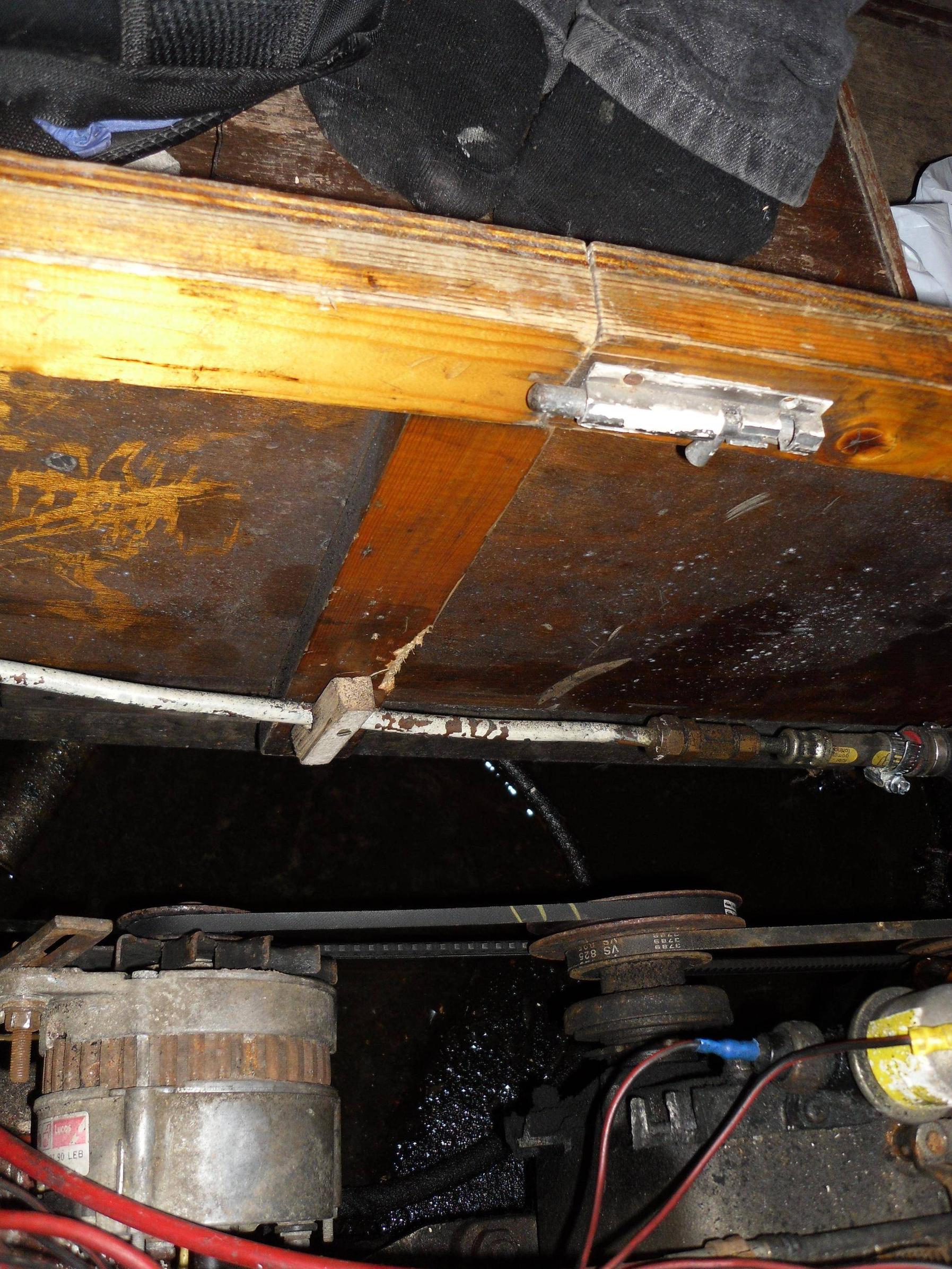 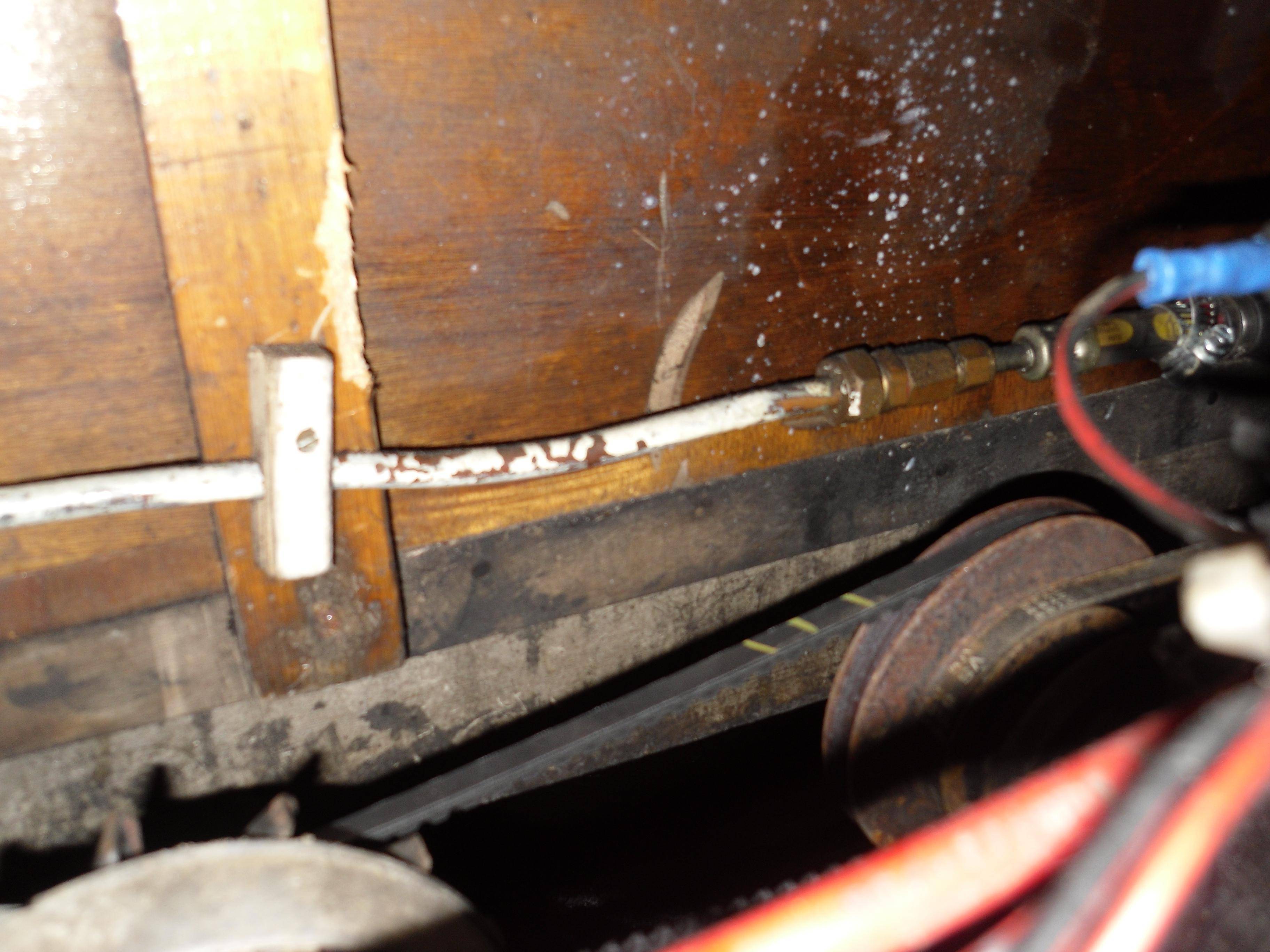 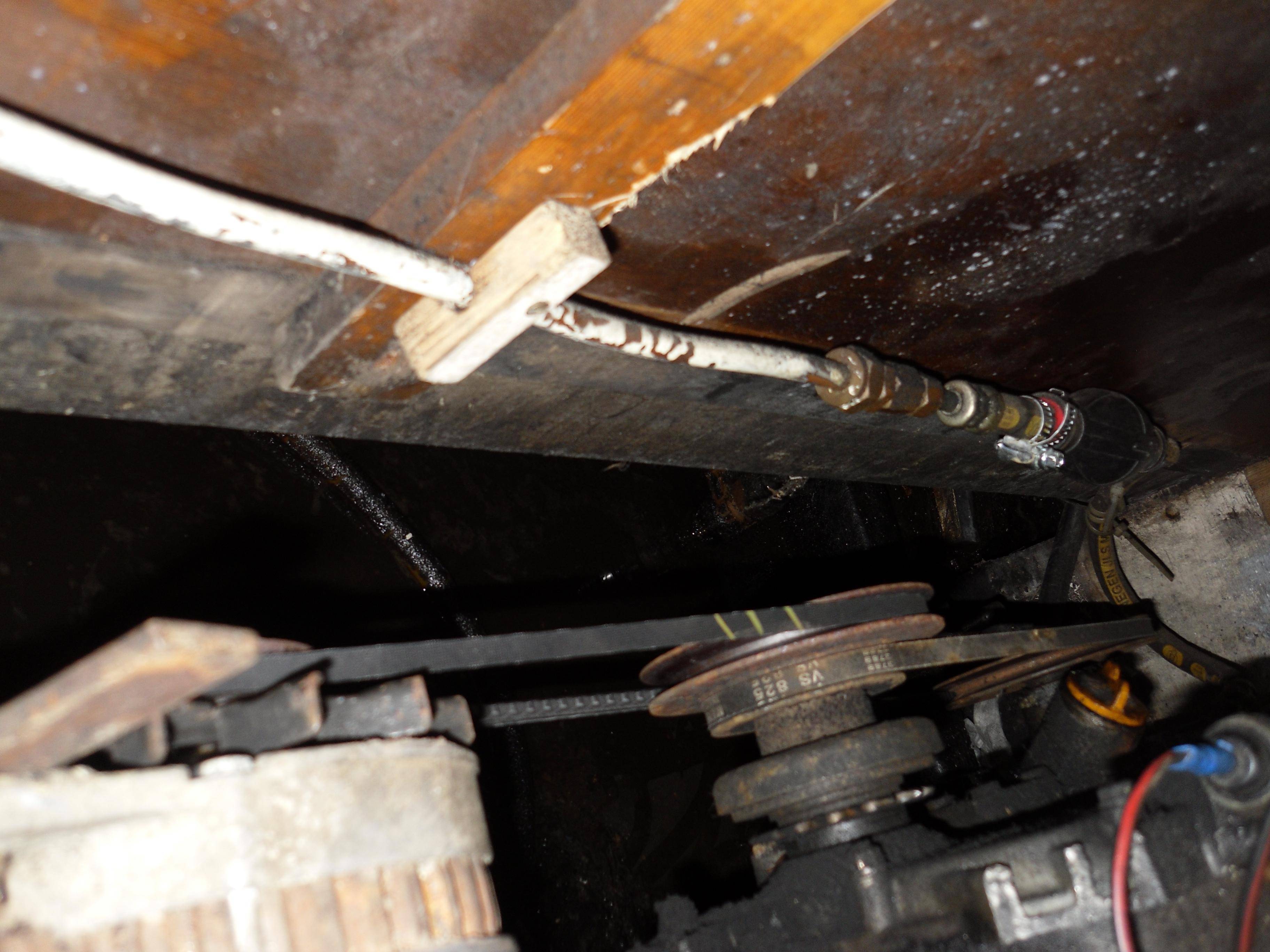 So, bear with me on this and maybe I can help. Mind you, none of what I'm going to say is going to be easy to do, but that is because your issue is not an easy one to solve. The main problems I see here with any solution is alignment and distance from any mounting point I can discern. My main thought here is you need to get the alternator connected back to the engine and off of the boat. In two of your pictures, I have circled some areas which may be points you can use as mount points for what I'm going to suggest.

In the first picture, there appears to be a water pump with three bolts that are visible. I don't know if these bolts attach to blind holes or go into a water jacket in the engine, so be aware of water leakage. If these bolts are not long enough to mount something off of, you can take a bolt down to a local hardware store (maybe you have a Fastenal in your area) and find a longer bolt with the same thread pitch or find a stud (this is where Fastenal would come in) which is long enough to replace the bolt on the pump side and have the other side protrude which you can attach a brace to. Attaching to two or more brace points (two braces connected or not) would be better. 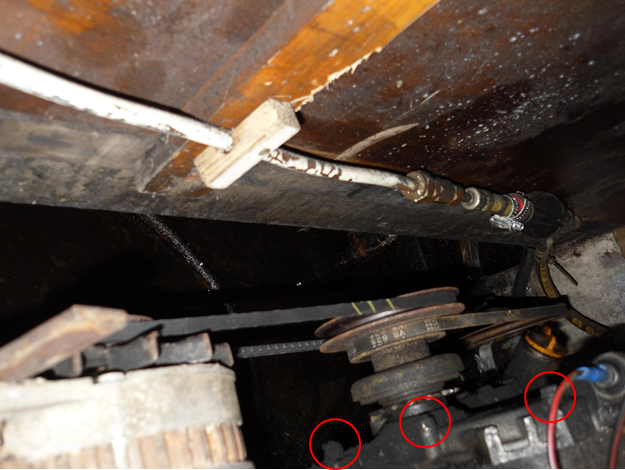 In the second image, I see possible mount points which appear to be where the engine mounts to the boat itself. Underneath of this, I'm assuming is some type of rubber mount, but the top part, where the very rusty nuts are at, could be used as another mounting point. Also, there is a circle on the back of the alternator showing a bolt in the alternator which can probably used as a mount point on the alternator side to help secure it. In either of these cases, the alternator may be needed to moved or rotated to achieve your goal. 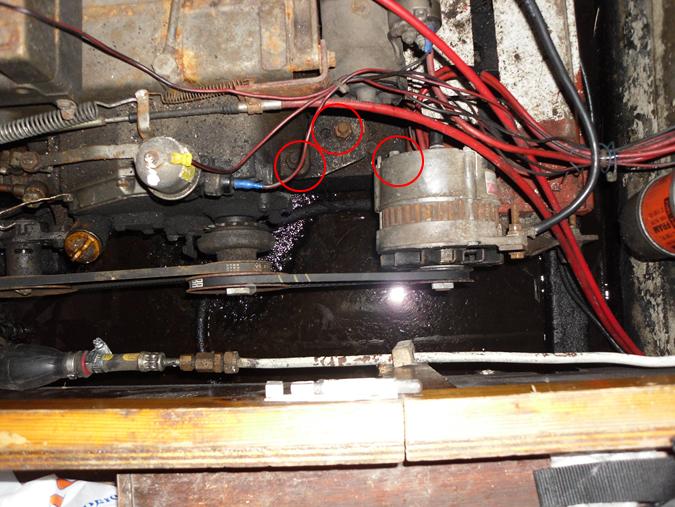 In both of these situations, welding would help, but would not be needed as you can pick up some 1/8" to 3/16" thick metal strapping which can be bent in a vise and drilled to create the right sized holes. You may need to get creative to make something happen, but with a little bit of ingenuity can be done with good results. Alignment of the alternator is key, or you'll be wearing belts out or they will tend to jump off of the alternator. Even if off a small amount can cause issues.

If you still don't believe any of the above will be able to work, my next idea is a lot more wilder and a bit harder to implement.

In the first drawing, you see the engine side pulley on the left and alternator on the right, with the belt running from each. The object in the middle would need to be your spring tensioner. Annotation (1) and (2) are places where threaded rods goes through with a roller bearing in between to allow the belt to ride on. Two nuts on the outside would hold it together. Flat washers would be needed between the nut/plate and between the plate/bearing to allow movement space for the bearing and security of the whole contraption. Annotation (3) is where you'd need to provide a mounting point, to either the alternator itself or the engine, to stabilize the spring tensioner. The second drawing is a close up from side and top of how it would be built. One of the two hole in the plate would need to be slotted to allow movement. This slot would probably need to be fairly long to allow for decent movement of the rod and bearing. You would need to have fairly stout springs on either side. 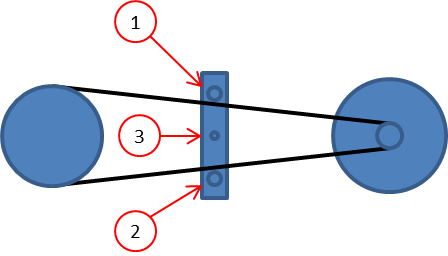 I don't know where you might get the parts to build this, but it may give you ideas on how you could do this. Let me know what you think.

Not the answer you're looking for? Browse other questions tagged alternator belt diy belt-tensioner boat or ask your own question.

4
How to loosen drive belt tensioner on 2007 Toyota Corolla?
2
Is rebuilding an alternator a DIY project?
3
What are possible causes for belt tensioner "chatter" at idle?
0
When an automatic belt tensioner is rattling, which component is rattling?
4
2004 Crown Vic seat belt tensioner won't extend
13
Are belt conditioners safe?
1
Considerations when handing over botched DIY alternator/electrical repair to a mechanic
1
Alternator belt whining when plugged in only
2
tightening belt tensioner after fitting new timing belt
1
Timing belt location on the pulleys with the new tensioner