The change occurred suddenly a few months ago after an oil change and tire rotation in March 2022, but that might be coincidental.

Always looking for anything else to check...

Noticed that adding Seafoam to the fuel tank and/or separately to the crankcase (just days prior to an oil change) very noticeably improves the engine/drive feel/performance in terms of how smoothly/effortlessly the vehicle moves, and also improves fuel consumption in short order, going from ~15 L/100km to ~13 L/100km average with Seafoam even though it was not in the system for the full period being averaged. However, the effect is temporary. Not sure if this provides any clues.

Another odd observation is that touching the brake pedal increases the instantaneous fuel consumption (decreases mpg) reading in the car's in-dash display. During braking, (and with the foot off the accelerator..) the fuel consumption spikes to the maximum reading (in L/100km, would be minimum in mpg) until a few moments after coming to a complete stop. I don't know if this reading is real or a quirk of the car's computer.

Here are some plots of logged data from a scan tool, for both city and highway driving. Notice how the instantaneous fuel consumption spikes off the chart on every start (no drag racing here, just gentle driving), and during every stop before reaching idle. 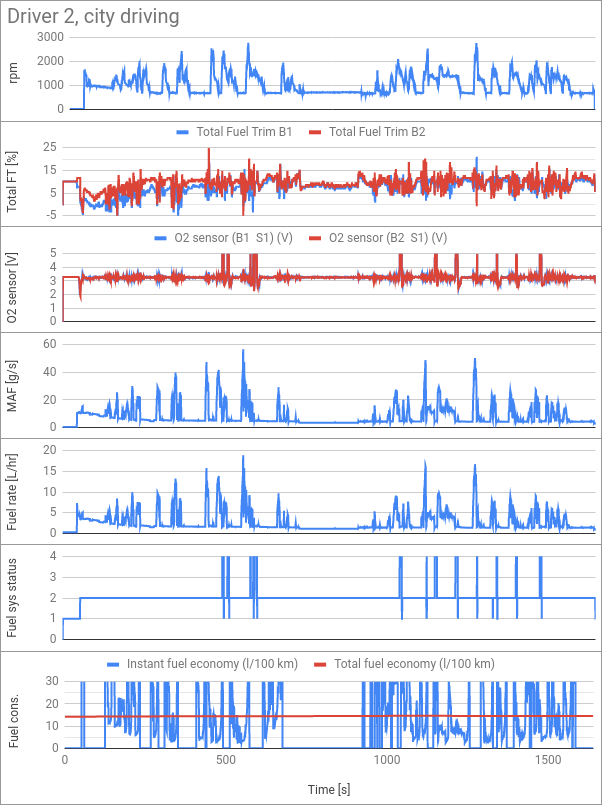 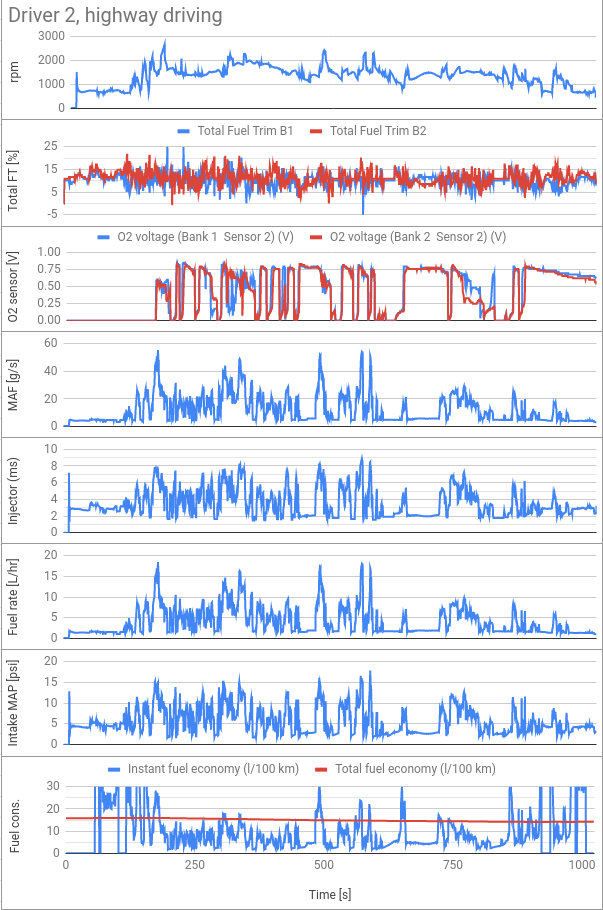 The scan tool plots are very helpful. Your fuel trim is out of whack. It should trend toward zero after warm-up at idle and while running at constant speed and constant load. Yours is running at around 10%, which means that the engine is running lean and is compensating by adding more fuel. This can be due to a vacuum leak.

In city driving, the engine spends a significant amount of time at idle. If fuel trim is almost always positive, especially at 10% or more, this will have the greatest effect on fuel economy at idle when fuel consumption should be at an absolute minimum. (It never reaches that minimum.) In highway driving, the effect is minimized due to lack of time spent at idle.

One way to find a vacuum leak is to take a propane torch, remove the burner tip and attach a length of rubber hose where the tip was, then attach the rubber hose to a length of metal brake line (or similar metal tubing). Pinch the end of the metal tubing to leave just a small opening for propane to blow out of. You want a gentle hiss, not a blast.

While the engine is warmed up and idling, taking care to stay clear of belts, fans and exposed electrical parts, turn on your propane wand and slowly sweep your plume of propane over various engine parts. Concentrate on the intake manifold, the throttle body area, all vacuum lines, etc. Don't forget vacuum lines that go to your braking and HVAC systems.

Listen to the engine as you sweep the plume of propane slowly over engine parts. As you approach a vacuum leak with the propane plume, there will be a momentary change in rpm -- possibly a quick increase, then a return to normal idle speed. As you pull the plume away, rpm will drop, then return to normal.

If you or someone else can monitor fuel trim during the exploration, the vacuum leak detection will look quite obvious: a drop from +10 down toward zero or into negative territory, depending on the size of the leak.

NOTE: You said that fuel trim has always been around 10% and it has not changed recently. I'm acknowledging that, but ignoring it for now in the interest of either confirming or ruling out a vacuum leak. If you find no vacuum leak, then I suggest you explore other reasons why fuel trim is / always has been so high. Perhaps a new question on this stack would give you more ideas.