A few days ago, my Starcraft Allstar minibus, built on a 2012 Ford E-350 cutaway, started having a problem that the park/marker lamps never turn off. I was originally informed of the issue by another driver on Thursday (March 31), but when I came to look at it, the lights were off. The engine started up fine when it was driven on Friday morning (April 1) so clearly the battery had not drained overnight, but the next time I saw it that afternoon the lights were on again. When I tried to start it on Saturday night (April 2), the battery was completely dead.

The lights that come on are the same as what comes on when the headlight switch is turned to the "park" position, which are also the same ones that come on as a "courtesy" when the driver's door is opened.

My first thought was that there is some issue with the "courtesy" lights feature, but that also makes the dashboard light up which is not happening here. I can open and close the door and see the dashboard lights turn on and then off exactly as they are supposed to do. I suppose there still could be an issue with this feature, but I do not know if there is any way to disable it.

My second thought was that somehow the aftermarket radio was backfeeding power to the lights, but the dashboard lights being off means that can't be true either.

I tried pulling every fuse that I thought might be relevant, but none of them helped.

I know there are a lot of places there could be wiring issues, but I'm fervently hoping I don't have to rip the body apart.

What else should I be checking?

I pulled almost every fuse from the fuse block under the dash without any success, but now that it is dark outside I was able to see something I missed when it was day: when I put everything back together, I turned the headlight switch to make sure everything was still working and I noticed that the marker lights became just a tiny bit brighter than they had been before.

The only reason I could think of for them being dimmer was that additional wire was being used to complete the circuit that was either too thin or much longer than the circuit should be. From there, I realized that I should check the fuses in the "upfitter" fuse/relay box above the driver's head (at least 12 feet of wire away from the chassis interior fuse block). 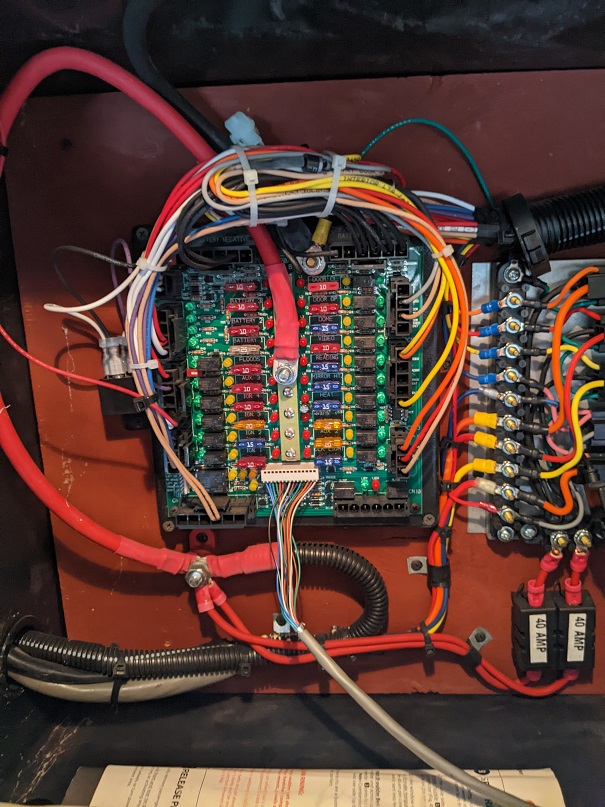 The bottom fuse in the right column is for the coachbuilder's logo on the control panel - it glows red when the other lights are on and when the engine is running, but somehow the relay was stuck closed and it was feeding power back to the marker lights. (I'm still not quite sure how that happens; I need to trace out these wires or find a wiring diagram.)

Removing the 15A fuse from this spot reset the relay and turned off the lights.

4
Headlights turning off randomly
10
Brake Lights Won't go On, Tail Lights Won't go Off
4
Why do the running lights turn on when the car is off?
1
Exterior lights turn off
4
Hyundai Elantra 2010, interior dashboard backlighting lights flickering on and off
12
Car won't start, horn won't honk, headlights won't come on, what could cause this?
1
Fog lights won't turn off
1
Headlights have to be switched off twice when vehicle isn't running for headlights to actually turn off