Hopefully this is a suitable stack for this question. I cannot think of any other place to ask.

I just cannot understand why an automobile manufacturer would spend extra for the white LEDs when they could use red LEDs instead to save the part cost. It seems like even if they have to change the dye in the plastic to better match the color of the LEDs, it would still be cheaper in the long run.

Anyone have any insight into the manufacturing that could explain this?

Quality tail lights use red LEDs for the red parts. White LEDs behind a color filter are very inefficient and typically used by cheap OEM parts (and fake OEM parts for that matter) which look good on paper because of their crazy lumen ratings, until you realize most of those lumens never make it past the color filter: 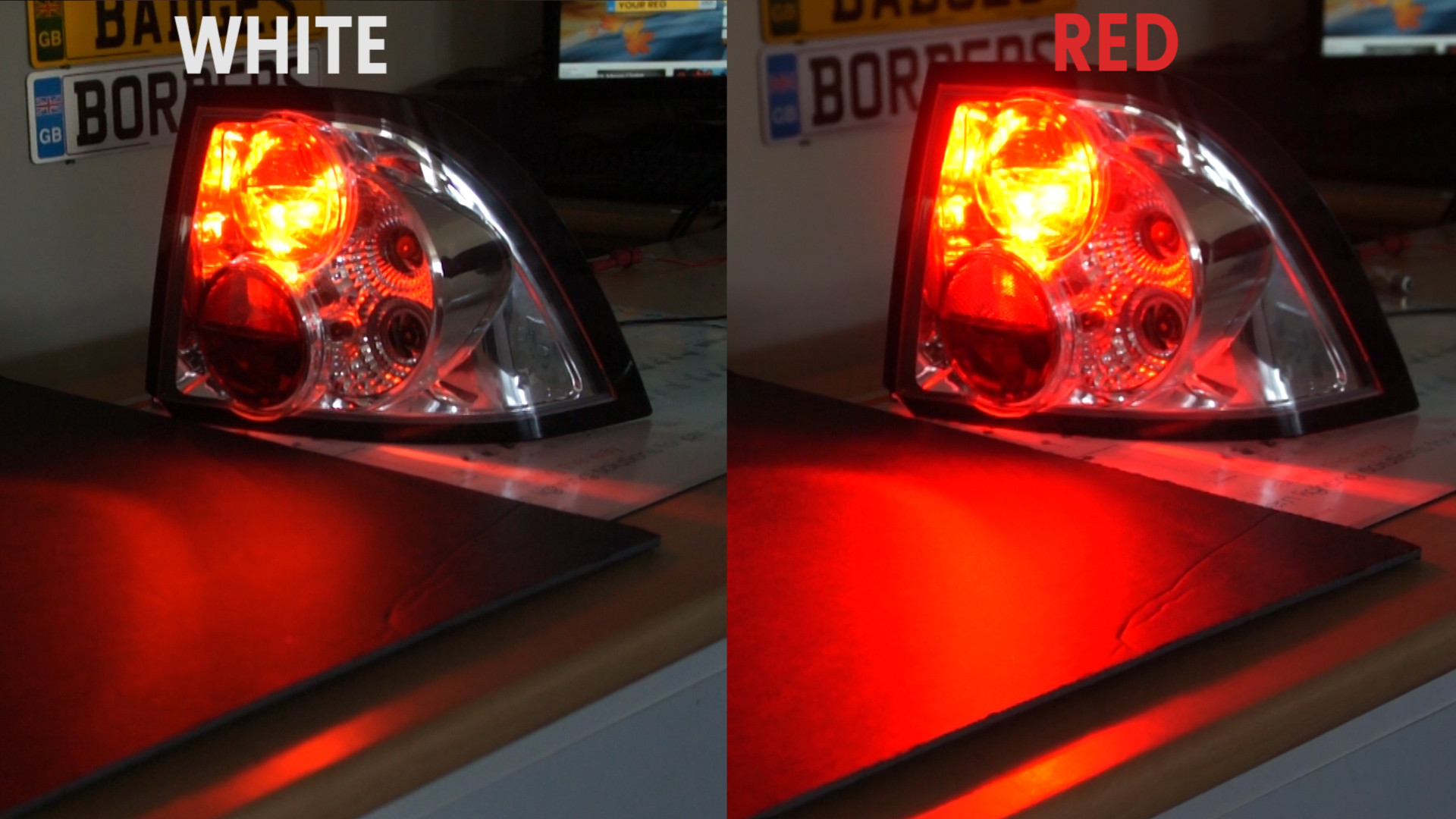 Having said that, a lot of what's been said about production cost advantages of using a single type of LEDs in a light block is true, so you do find while LEDs behind a red filter in some OEM or even OE parts.

One part of the answer might be spectrum or gamut. There are govt specifications for the color of tail lights, SAE standards etc. It may be that it's easier to get the exact color needed in plastic than in LED emission lines, especially over various lots.

Definitely red LEDs under a red (or white, for that matter) cover. This is how a (good) factory tail lights are made.

Modern illuminating LEDs are more efficient when they are narrow-band color. E.g. red or blue ones are better than white ones.

On the other hand, by covering a white LED with red cover, one loses about 2/3 of the light (this is how the red pigment works - by absorbing the photons that are not "red").

In total, by using the same efficiency class LEDs, one loses 60-85% of the brightness with the combination of white LEDs and red cover. Loses in yellow are somewhat less, but still pretty much significant.

There are quite a few reasons why one should not use LED lamps in a setup made for incandescent ones. This is why in most parts of the world this is simply not road-legal.

The reason why you see white LEDs is because the aftermarket trash manufacturers are not really eager to follow neither the code nor some brightness or efficiency standards. They make whatever they can sell.

I'd sure like to see the numbers here. My guess is the simple answer I often use here to design related questions.

Which design is the least expensive to produce?

My guess is it's the systems cost which is driving things here.

Speaking of LEDs... its not clear if what we see in generic terms holds true for current manufacturing concepts. For example, a SMD (Surface Mount Device) LED deployed in a large matrix flat pack. If you are a manufacturing facility, how would you produce that? There is large demand for white LED's in that format. What about red LEDs? Would you dare introduce that into your manufacturing process, knowing full well that at a glance these LED's look alike? Ugh.

The other piece of the conversation I'm not entirely sure of is the driver circuitry differences between White LED's and Red LEDs. I believe those different LEDs work with different current / voltage drops. That could well lead to differences in the driver chips in use. And that leads to complexity (if introduced within the White LED manufacturing plant...) No problem, just build and tool up a brand new Red LED plant; mixing problem solved (oops. That's expensive)

You never want to introduce a potential quality problem with mixed stock How do you fix that? Well, you would introduce a whole bunch of computer checks and inspections so that never happens. And guess what happens to the prices you would have to charge? That would be ugly.

What we don't know is the prices (cost) here. It would not surprise me that the purchasing groups have leveraged huge piece cost reductions for long range committments for quanity and time. (If we would guarentee a 50 million piece sustained order, would the supplier amortize tooling and reduce piece price, etc...) If you go outside of those bounds (by say introducing red LED's into the mix) that would result with a huge price increase from the supplier. Been there, done that and it is always an ugly conversation.

And yeah, I apologize for going a bit off script here. The actual question above is why not red led's under red lenses. My answer is still the same root response.

For many elements of automotive design, the answer to "Why did they do it that way?" is because of price. When you make millions of vehicles per year, when you save even a few pennies on component piece pricing, those dollars add up.

And its not just the LED / drivers / heatsink costs. A additional piece of the conversation is plastic raw material and tooling costs.

Note too, there are a whole bunch of legal requirements for rear and side marker reflectivity. That stuff is easy to integrate in red molded lenses... but you have to add extra red bits to meet the requirements on a clear taillamp system. And that adds more cost.

With that said, headlamps / LED accents / tail lamps are often a "surprise and delight" visual feature. They add a lot to the visual appearance of a vehicle, and for that the manufacturer may be willing to spend more on piece costs.

I assume the main reason for this is that white LEDs are brighter and more efficient.

White LEDs, on the other hand, are used for general purpose lighting, flashlights, and vehicle headlights. In these applications, brightness and efficiency matter a lot. Hence there was enough money to improve both parameters, and today we have bright and efficient white LEDs.

It probably helps that stock for only one kind of LED needs to be managed, but I believe the main reason is that white LEDs today are easily available in bright and efficient configurations.

Not the answer you're looking for? Browse other questions tagged tail-lights led or ask your own question.