I have a 2009 Sebring and the turn signal on the passenger side is not working properly. When I turn it on I hear it blink normally a few times then start to blink very quickly. The bulb has two filaments but only one of the two comes on when it blinks. One of the filaments is used when the driving lights are turned on and both are used when the turn signal is turned on.

I swapped the bulbs between passenger and driver sides. The driver side worked fine and the passenger side had the same issue. The rear turn signal works and blinks at the same fast rate as the single filament in the front bulb.

I replaced the multifunction switch but it did not fix anything.

The passenger side headlight had stopped working a while ago and my father-in-law diagnosed a bad ground. He spliced in a new ground for that bulb holder and it fixed the problem. He suggested doing the same for this bulb holder. I am ok doing that, but I am confused by the wiring diagram from the Haynes manual.

The bulb holder has three wires: black, white, and white with a tan stripe on it. I assumed that the black was ground and the each of the other two wires provided power to one of the filaments. In the wiring diagram it looks black is ground, the WH/TN wire goes to the TIPM, and the white wire is not connected to anything. Am I reading that correctly? If so, how does that one wire control the two filaments separately? 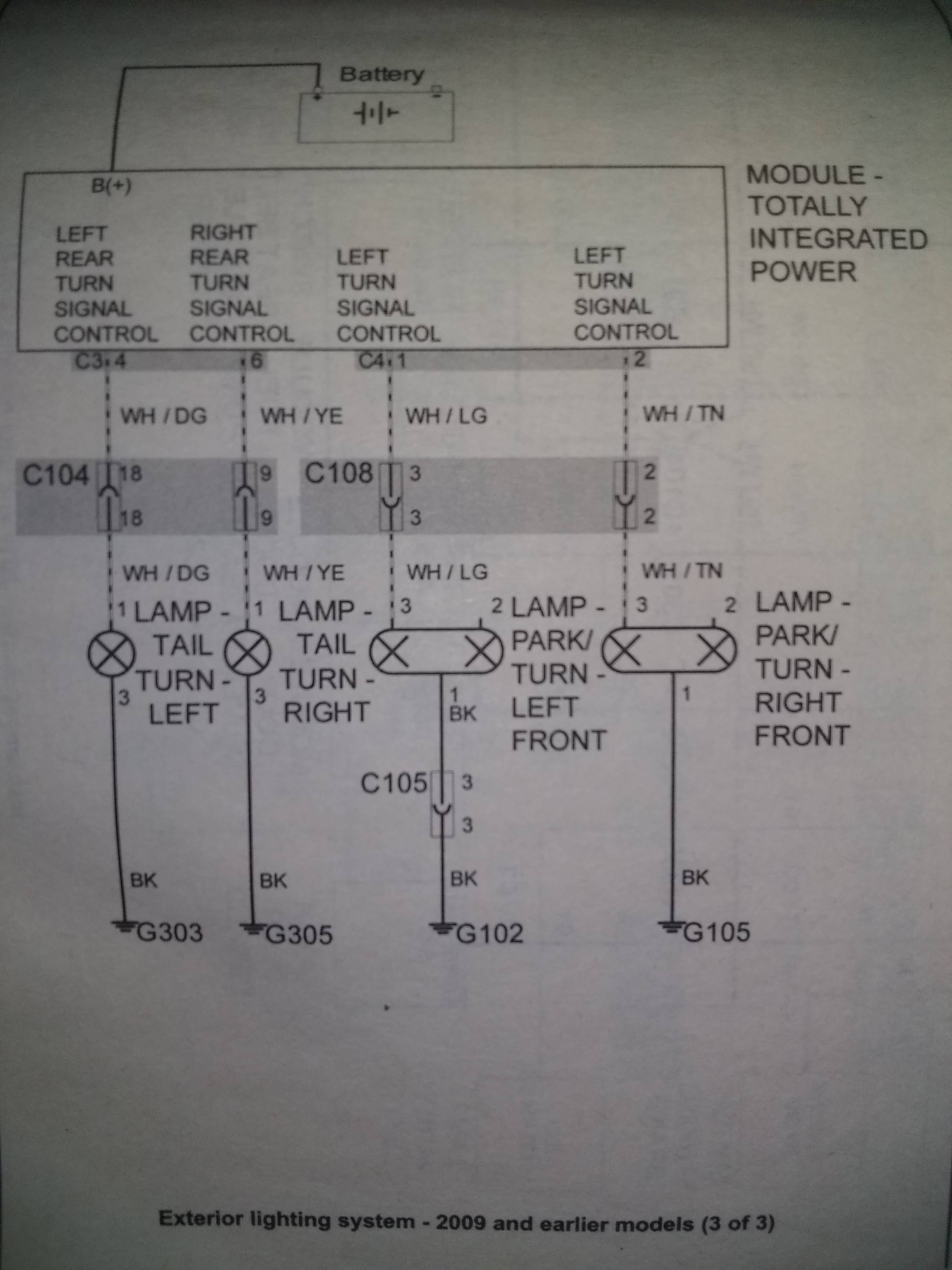 Since car wiring is very complicated in modern cars, the wiring diagrams are generally split into individual functional areas. This diagram is just showing the indicator wiring, the missing wires that are labelled with a 2 will have a wire connected to it, but it will be on the wiring diagram for the driving lights.

The number 2 wire will be the white wire that you are talking about.

As you say, the black is the ground wire.

It is possible it is a grounding fault, without the direct ground from the black wire, the power from the flasher is having to pass through both filaments to get to a ground elsewhere.

Without the rest of the diagram, I would assume that white is the park lamp supply (easy enough to test...)

I would check that the bulb is correctly fitted in the holder and the connections are making good contact.

Not the answer you're looking for? Browse other questions tagged electrical turn-signal wiring-diagram or ask your own question.

6
Daytime running light failure -- one side only
1
What bulb is in the front right turn signal/parking light bulb in a Honda Accord 2003 Sedan?
4
2008 Toyota Rav4 passenger turn signal flashing rapidly, hazards normal
5
4-way car connector to 7-way trailer connector
1
Turn signal strangeness, and not just a burnt out bulb. 02 Safari Van
1
One of the turn signals does not stay on
1
2003 Jeep Grand Cherokee- turn signal wiring?