Do I need to take special care of my new motorcycle in this particular scenario?

I may or may not be overthinking. I'm new to motorcycles and I bought a new motorcycle. Here's the full thing:

So we don't have a showroom in my city. So someone I knew rode it personally to deliver it to me. I was with him as a pillion.

It's NOT like he always rode at 62 kmph. I would say average speed was around 40 kmph. We rode 40 Kms in 1 hour and reached home without any problems. The rider is very experienced with low cc commute motorcycles.

Now, I came across some questions and answers on Quora which say you should ride a new motorcycle like this at slow speed... for first 1000 Kms.

They gave example that if it's less than 150 cc motorcycle, ride at around 40 kmph max.

But as you know, at some points we rode it at 62 kmph.

Then I checked my owner's manual and it doesn't mention anything specific speed limit. It just says:

Running-in Period During the first 500 km (300 miles) of running, follow these guidelines to ensure your vehicle’s future reliability and performance

I can surely say that the rider didn't do the max speed and didn't do high speed instant braking. But I'm a bit disappointed as we rode it at 62 Kmps for a few Kms.

Then someone told me that if you're worried so much, you should change the oil as it will remove the dissolved or wear and tear "impurities".

So given all that, can this slight "overspeed" during my first 40 Kilometers ride cause future performance issues with engine? If yes, should I change engine oil to avoid that possibility?

When it comes to running procedures the guidance in the owners manual overrides generalized advice on the internet. If the manufacturer intended for there to be speed restriction (or more likely an engine RPM one since engine speed is what matters not road speed) during running in they'd specify it there.

From how you describe your friend's riding it seems pretty much in-line with what the manual suggests, so I really don't think you have anything to worry about.

Also the whole journey was only 42km - short of bouncing it off the rev-limiter the whole way it's going to be difficult to do any serious wear to the engine in that short a distance.

should I change engine oil to avoid that possibility?

No - change the oil when the manual tells you the first one is due and not before. Some engines will be supplied with oil specific for running in and you actually risk doing more harm than good by prematurely changing it to the "normal" oil.

Keep following the manual's guidance and enjoy your new bike!

In the modern manufacturing context, the "run-in" procedure is intended more to prevent damage to the rider and not to the bike.

Like 30 years already, the surfaces in the engine are precise enough not to need any run-in. You are not doing any significant good to your engine by running it at low throttle and limited rpm.

The bike riders, on the other hand, are pretty much the same Homo (mostly) Sapiens with a helmet instead of a head, just like 100 years ago. They pretty much NEED a run-in with a new motorcycle.

This is why they are adviced to run conservatively and slower than they think they can, until they are ready to control the bike at its limits.

The only part that is related to the bike itself is that as with any machine, failures (including catastrophic ones) are somewhat more frequent for an out of factory product (search for the "bathtub failure rate" for some ideas). It is still MUCH safer to get a catastrophic failure (like a wheel falling off) at a low speed.

In short, good luck with your new bike.

Maybe I must remember I am an adult already, because these 30 years in my answer are more like 45 for top brand engine manufacturers and like 35 for the least advanced ones for cars, bikes and even lawnmowers alike.

Maybe even more for industrial/marine/rail/lorry engines. Today, an engine that needs run-in is called "improperly assembled" (and the proper words for this are NSFW).

Maybe 10 years ago, I read a statement from a car manufacturer rep that they test all engines in different load profiles, including few minutes at their maximum power.

So much for running-in an engine that is already mounted in a vehicle.

At the same place, randomly-selected engines are run for 1000 hours non-stop at their maximum power and are not expected to fail or go below their specs in these 1000 hours. Well, those are not put in the assembly line afterwards.

Because in 2021 and engines are assembled by robots.

Up to the mid-1970s, the engine was the most complex and most prone to failures part of the vehicle. It is not anymore.

Today, is cheaper to make the engine as precise as the technology allows instead of building it to lower standards first and deal with all the warranty repairs later. You get a happy customer as a bonus.

p.s. The only 110cc engine I own is in my Honda generator. Pretty much a motorcycle engine, coupled to a 2kW alternator.

Guess what I did right after I unpacked it? I started it, loaded it at 90-110% of its rated power and kept topping the tank for a week. I even missed the first oil change (the servers had to run and the power company kept promising).

The hero has more than 500 hours runtime now (of course, not all of them at full load) and shows no signs of wear.

Experienced motorcycle rider and mechanic here. Take a sigh of relief, you are over thinking it. The answer you read from Quora sounds very much like it was advice simply suggesting for a new rider learning to ride stay at lower speeds till you get comfortable.

You are not going to hurt a bike driving at it's max speed, it is designed to do that. Instead the thing that does hurt a bike is if you constantly do something called "Red lining" (the red area in the gauge pictured). 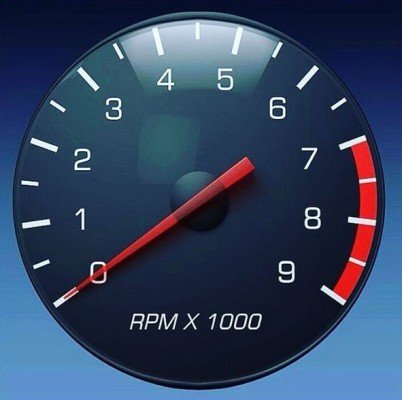 Red lining is where you max out the RPMs (aka tachometer) by putting a sudden load on the engine with actions like the full-throttle starts and rapid acceleration (which you mentioned the manual suggested not doing). If you are super concerned about riding style vs. wear & tear just avoid maxing out your RPMs, but again the bike is designed to do that. If you accidentally red line it is not the end of the world, just don't make a habit of it.

In my experience bikes are super sturdy mechanically. Try to focus more on learning to ride, important things to watch for while on the road, enjoying the experience, and most important having fun. The bike will be there to enjoy it all with you. Adventure far and ride safe!

Not the answer you're looking for? Browse other questions tagged engine motorcycle or ask your own question.

10
2001 Suzuki Katana 600 motorcycle won't start
4
Motorcycle - sudden brake failure - suddenly gone - is it safe?
3
Hauling a motorcycle cross country — more or less wrong ways to do it.
17
'00 Honda CBR929RR - Unknown issue, help!
2
1972 Honda CB750 Motorcycle Choke
1
Why does my motorcycle cut out at random intervals?
1
Running in a new car
0
Is the rear wheel supposed to spin like this?
0
Are my motorcycle handlebars twisted?