My John Deere LA120 lawn tractor has a Briggs and Stratton 21HP OHV engine that quit suddenly. Bad gas was my first guess. Along the way, I discovered a leaky fuel pump. So far, I have now replaced: the fuel, the fuel pump, the fuel filter, the spark plugs, and I've disassembled and cleaned the carb.

I finally figured out it was running on one cylinder only. After removing the dead cylinder valve cover, it's obvious why: the exhaust valve push rod was bent badly enough to have disconnected from both sides. The exhaust valve itself is stuck CLOSED, which explains the bent push rod. On further inspection, there's what looks like a sleeve (is this the valve seal?) around the valve shaft, protruding out of the head far enough that the valve will not push in at all. Tapping on the valve with a hammer slightly pushes that sleeve back into the head, creating enough space that the valve now moves. 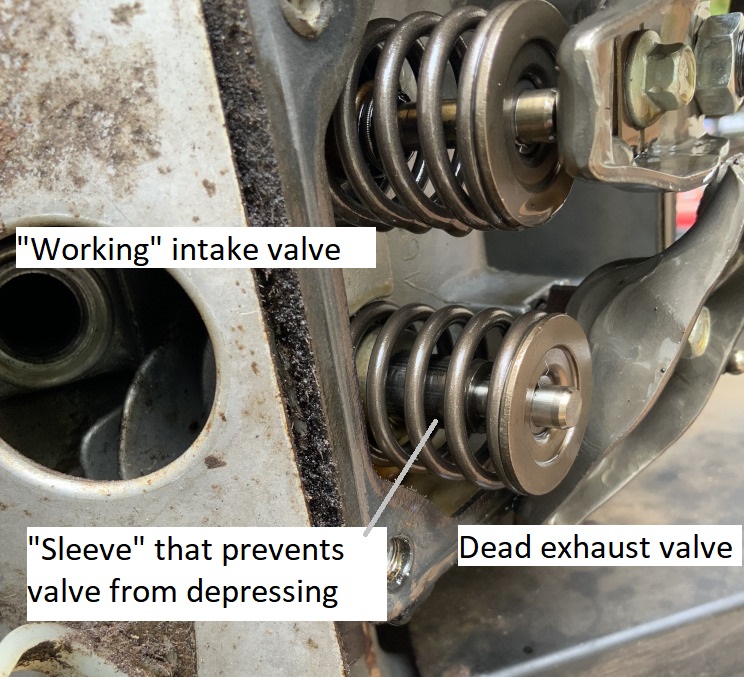 The intake valve seems to move normally. The intake push rod, however, also appears slightly bent, though still in place.

What could have caused the stuck valve? Any ideas for next steps? I don't think I can release the valve spring retainer, because I can't open the valve enough, without hammering the valve and its "sleeve" back into the head. I would be open to replacing the entire head assembly, but I don't want to do that if there's something wrong that's even deeper which would cause the same damage.

It looks like the valve guide has move out of the head. It is as you have described a sleeve that the valve stem slides in.

The valve guides are pressed into the head and should stay there. Other than it being a badly fitting guide, all I can think is that the cylinder head has overheated causing the valve guide to become loose.

Is the head aluminium? The aluminium would expand more than the steel guide when overheating which could allow the guide move.

There doesn’t appear to be much oil in the photo. Had you cleaned it?

You really need to take the head off and have a look at the valve and piston.

Not the answer you're looking for? Browse other questions tagged valve lawnmower briggs-stratton or ask your own question.

4
John Deere LX 266 lawn tractor engine dies
8
What caused bent intake push rod?
3
Craftsman lawn tractor
6
Help me diagnose the cause of this intake valve burn
3
Is this valve toast or could I possibly salvage it without tearing into the engine?
2
Would using a cooler plug help or even prevent this level of exhaust valve damage
3
Briggs and Stratton yard machine mower
1
Low compression in one cylinder with a misfire code, but no smoke in the exhaust