How would you approach fixing this panel part?

This is a continuation of this saga. I just removed my rear window and grinded down the fix area, finally past the point of no return. Found out that I was scammed by the body worker worst than I thought: There are holes in the panel that were filled with body filler instead of fixed, since the repair is about 1 year old and I can't believe those holes appeared in such a short time.

Enough mourning, heads up and let's move on. This is my first bodywork repair and already a hard one, so I'm asking for maybe some guidance from more experienced ones. This is one of the repairs, possibly the most complicated: 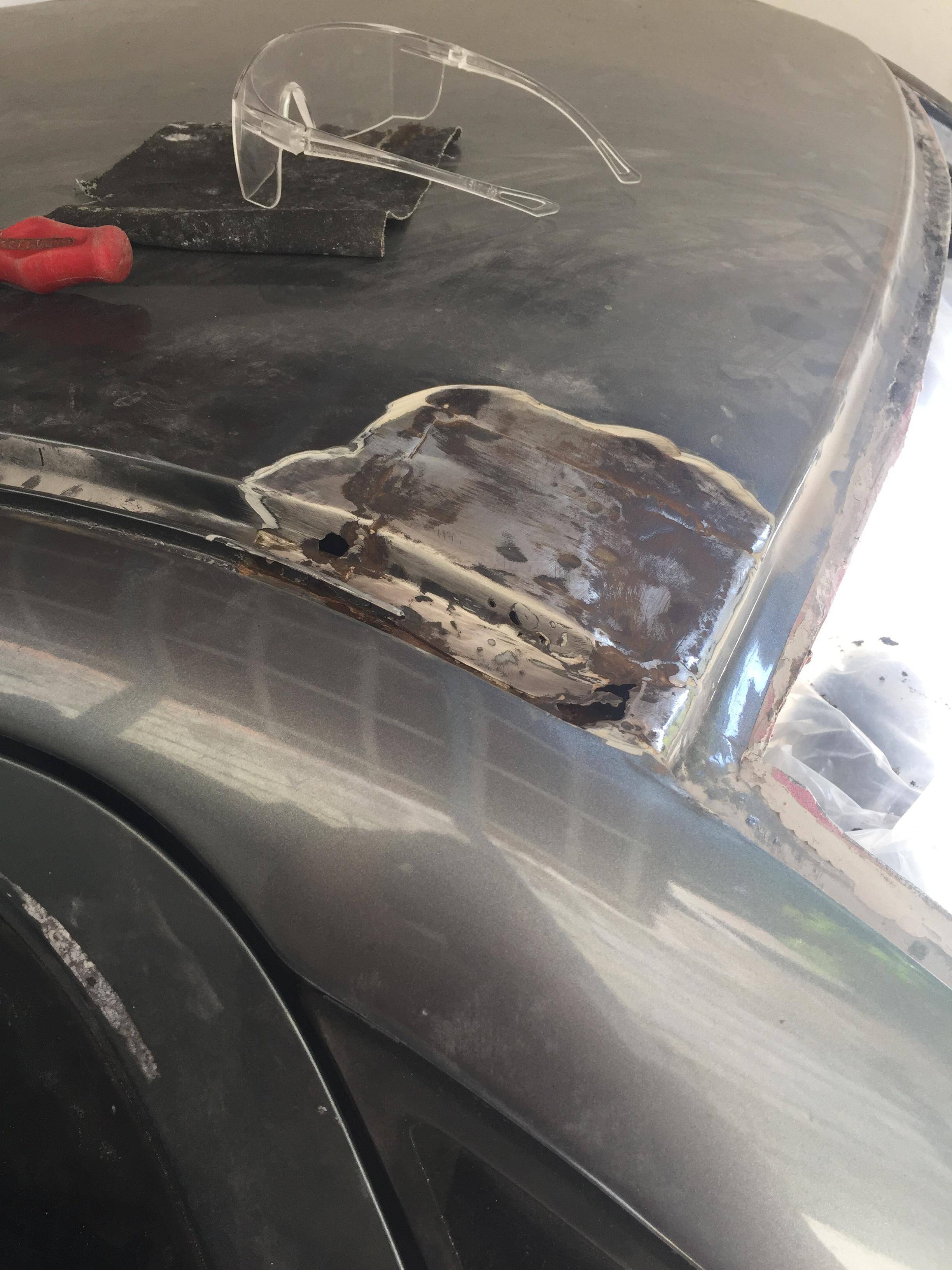 You can see the roof panel previous repair has holes in some parts. It's rusted underneath as well. The panel below it shows signs of rust too, which I can only reach once I cut the roof part out. Except for the hole areas, most of the previous fix is alright in terms of corrosion in the surface, just the shape is terrible (wouldn't mind fixing the shape with body filler though, no need for car restoration standards on this one).

The first approach I thought of, would be cutting this part out (red line in the second image), including all areas with holes, do small patches on the cut part itself to cover those holes, sand down the rust underneath the part hoping that it doesn't make the sheet too thin, treat it and weld it back. That would probably be the easiest approach because it includes less sheet shaping.

The second approach would be fabricating the part. But it's a part with lots of bendings and curves, probably not the easiest one for a beginner. If I were to fabricate it, I'd probably have to divide it somewhat like below: 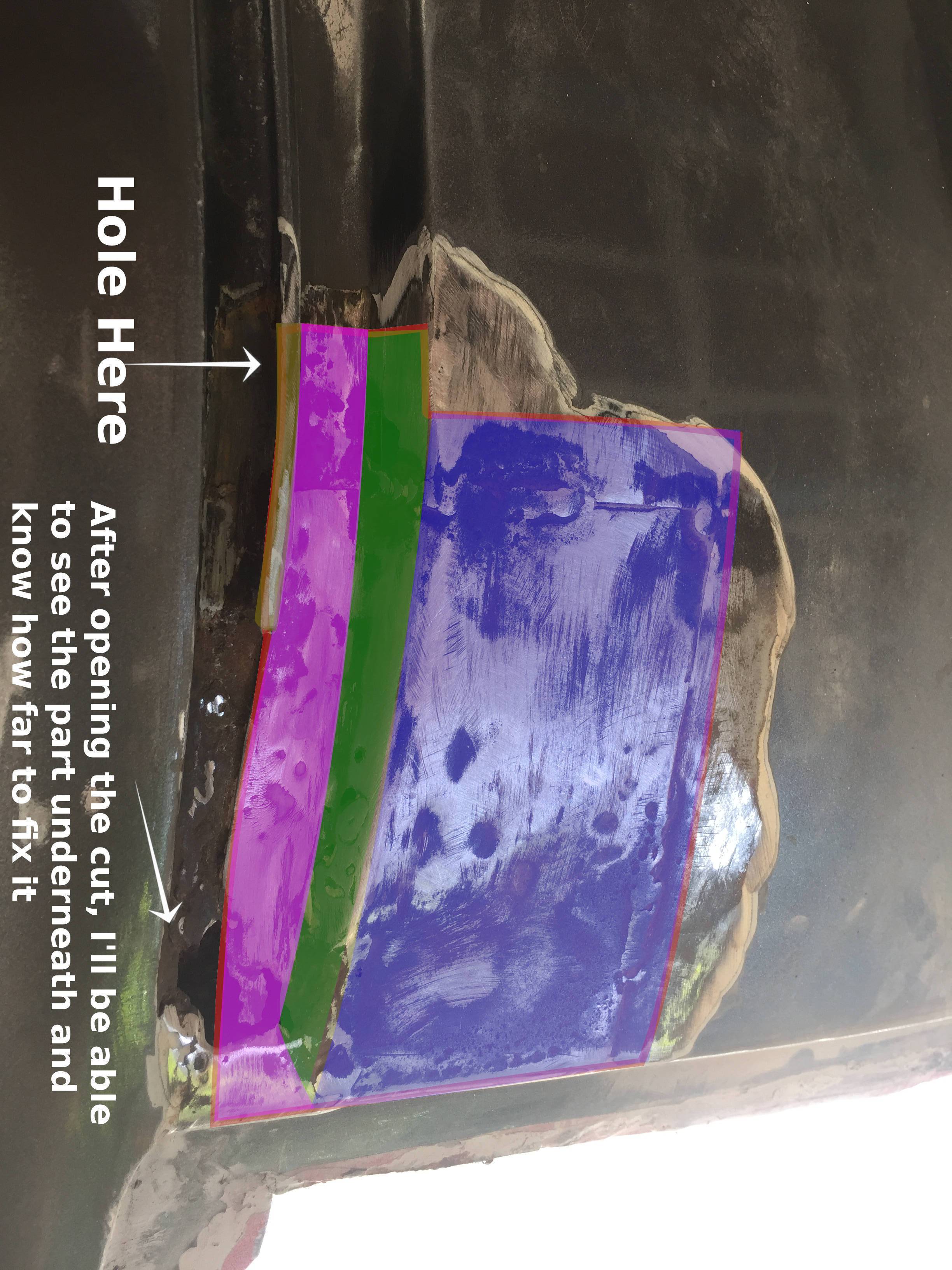 Each color is a part of the final piece I'd have to mold separately, and then weld them all together. I've an old dented hood I bought to get my steel sheets out of, hopefully enough material if I don't screw up too much. Even on the fabricating approach there are different ways I could do it: I could cut the blue area for example, and weld a new sheet in place, molding it while I weld, and so on for the other areas. Or fabricate the part completely and weld the whole thing in place.

Was wondering what the experienced ones here would advise as the best way for me to go through with this fix!

If you have a donor sheet, then cut the complete piece out and match it into the hole the same size.

Takes a lot of welding skill so you don't heat deform the panel.

That will be a learning experience. You will end up smoothing some body filler over but should be less than 1/8" thick if you do it well.

Not the answer you're looking for? Browse other questions tagged rust body-work welding or ask your own question.

0
What's the right way to weld patches in the joining of panels?

0
How many hours for roof reinforcements replacement
4
Minor body rust sanding and repair
6
Welding sheetmetal
3
choosing between the many ways to fill exterior trim holes
2
Affordable-ish but not-too-cheap-looking rust repair for wheel arches?
1
Preventing Rust/Corrosion of Chassis when Cutting Threads and Installing a Bolt
2
Car bodywork welding: Is that enough penetration for a panel repair?
2
Does a cracked paint blister corrode faster than if grinded?