I have a 2005 Hyundai Elantra. This morning the battery on my wireless key fob died, so I'm unable to use it to unlock the car. From past experience, I know that unlocking the car using the physical key will set off the alarm.

From the owners manual.

The alarm will be activated if any of the following occurs while the car is parked and the system is armed.

The siren will sound and the turn signal lights will blink continuously for about 30 seconds (This will repeat 3 times). To turn off the system, unlock the door or trunk lid/tail gate using the transmitter or the ignition key.

The system will be disarmed by using the transmitter or the ignition key.

Now the way that reads it seems that opening the door with the ignition key won't make the alarm go off. In my experience it means if you use the ignition key to turn on the ignition it will disarm the alarm. Most cars I am familiar with will do some type of pre-warning when the door is unlocked using the key, and if the ignition key is used to start the vehicle within x number of seconds the alarm will not go off. Even if it goes off in your case try starting the car and that may silence the alarm.

As far as battery replacement the owners manual also addresses that.

When the transmitter's battery becomes, it may take several pushes on the button to lock or unlock the doors, and the LED will not light. Replace the battery as soon as possible. 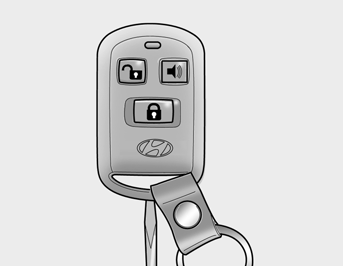 Carefully separate the case with a blade screwdriver as shown in the illustration. 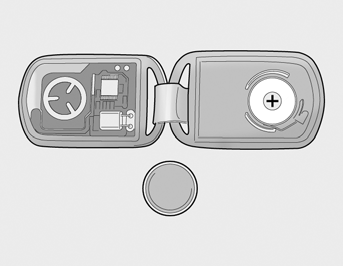 Remove the old battery from the case and note the polarity. Make sure the polarity of the new battery is the same (+side facing down), then insert it in the transmitter

Also note unlike the Audi you will NOT have to reprogram your remote.

I found these instructions on this site. 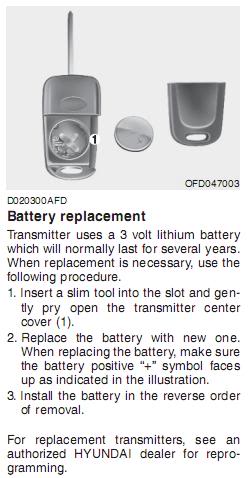 According to the instructions, the battery is a simple CR2032 battery, found anywhere you can find batteries (like Wal-Mart, or whatever). If there is a second transmitter, use it. If not, you can try opening the door with the key, then using the key in the ignition. This works in some vehicles, but once the alarm is hit, you know the deal. If you don't want to try this, you can probably find another battery around your house to use for the mean time, such as in a different key fob or in an unused computer (in the motherboard). This will get you by until you can get a new battery for your fob. When you pull the battery out of your fob, you will not lose the code or need to have the fob reprogrammed. It is made to stay paired, fob with the car.

I have an Audi, and the physical key sets and releases the alarm system. So it should not set the alarm if you use the key to open the doors. Did you actually try to unlock the car with the key and it sets the alarm off?

When my battery dies, and the FOB is disconnected from the car I have to plug the key into the slot, and turn the car on/off (not the engine though) five times and then the key is reprogrammed with the car. For 2005 Hyundai Tiburon, the instructions are:

Replacing the battery is really simple. You can use a flathead screw driver, and be gentle and it should be easy. This video shows how to do it. It should be fairly easy. DO NOT go to the dealer... They will charge you way too much for it, and then will find something wrong with your motor as well.

On a Hyundai Getz, if you want to disable the alarm so that you can use either the fob or the key to lock/unlock the car, you can bypass the hood switch so that the alarm circuit thinks the hood is open, and it will not go into the Arm state.

This is equivalent to just locking the car with the key.

The hood switch connects to ground when the hood is open, so you just have connect the single switch wire to ground.

You can also fit a switch so that you can select whether you want the alarm active or not.