Timing belt location on the pulleys with the new tensioner

Recently, I replaced my timing belt, water pump and belt tensioner. Everything looks fine but I noticed something. With the old tensioner (17 years old), the old belt would sit at slightly different position on the pulleys. I mean when I tensioned the old belt with the old tensioner and cranked the engine by hand (to take up belt slack), the belt walked a little more and sat on a different position on the pulleys but with the new belt and new tensioner, the belt walks a little less before sitting in its place. The following picture shows belt location on intake pulley (with the old and new tensioners). 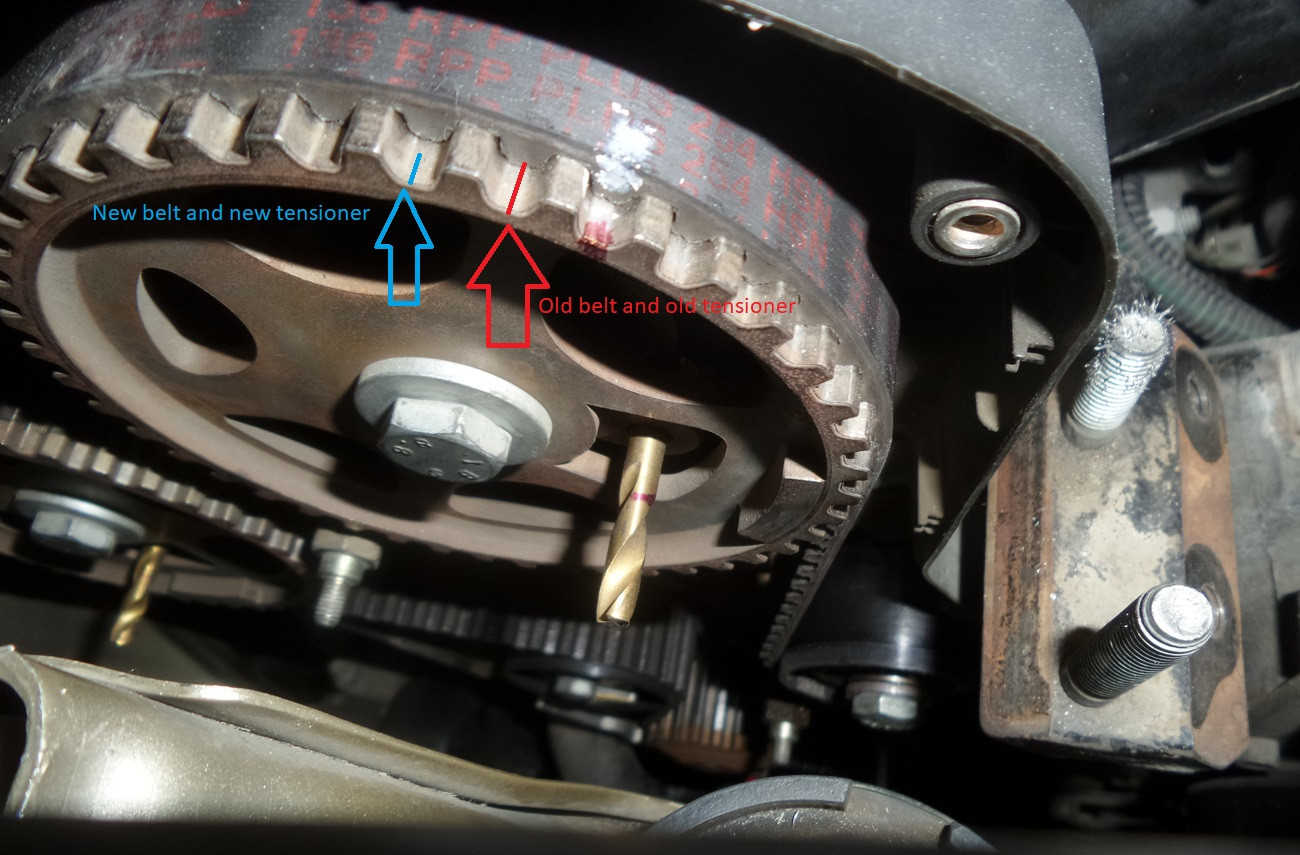 This is a side by side comparison:

Lets sum it up:

If all the points above are matched, then I'd consider this job done correctly.

The fact that the camshaft pulley settles in an slightly different position I'd consider as irrelevant. Maybe it is a sign that the old and new tensioner bearing have different running resistance, either the old one was worn or the new bearing needs some run-in. Maybe the old belt became stiffer. Maybe the new belt has a slightly different stiffness. Perhaps there was some misalignment of the tensioner before (that your engine survived by some miracle) and you corrected that. In the end it is irrelevant.

The new position looks like it is more correct than the old position, which looked too far back.

Looking at the location of the tensioner, wear would likely cause the tensioner pulley to tilt up at the front, which could cause the belt to move back on the pulleys.

Was there much play in the old tensioner?

Not the answer you're looking for? Browse other questions tagged timing belt pulley peugeot-406 or ask your own question.

4
How can I remove Factory Air Conditioning from a 1965 Mopar Big Block
8
Why are these paint dots under the timing belt cover not consistent?
13
Strange noise from timing belt area
4
Should a Timing Belt Pulley Spin Freely or Not?
2
07 Escalade - Adjust pulley alignment?
0
What's the best approach to install new Timing Belt that's 1/2 a tooth off
1
Should a serpentine belt tensioner "bounce" or "jiggle" slightly?
2
tightening belt tensioner after fitting new timing belt