Is it worth switching to full synthetic or blend oil in my older car/truck?

I have an older (enter vehicle here) that has 100k miles on it. Would I see any benefit switching to full synthetic or synthetic blend oil? Is it worth the extra cost in an older vehicle?

Check with your dealer or manufacturer to see if synthetic is usable in your car first of all. For example, RX-7s have traditionally recommended against synthetic because they inject some oil into the combustion chamber and synthetic oils don't work as well for sealing the "apex seals" in this application.

Beyond that, there is also a theory that synthetic oils may break down sludge and varnish which is sealing what would otherwise be leaks. So switching to a synthetic may cause a car that has no leaks to start leaking. I've never had that happen or known that to happen, but they do promote reducing sludge and varnish as a feature of synthetics.

That said, I've had some mixed results with Synthetics that make me question their worth.

One situation was an old '86 Subaru GL-10 wagon I had. It had a turbo and I put Mobile-1 in the engine and Red Line in the trans-axle. My wife and I took the car up to Canada on one trip where it was -25 to -45 degrees. The car ran surprisingly well, including shifting, compared to my experience in Colorado which rarely gets below -10. That was a clear win for the synthetics.

A decade ago I had a '89 VW Vanagon that I put a new engine in. After the initial break-in, I ran nothing by Mobile-1 in it. I had all sorts of problems with it keeping oil pressure up, which went away when I switched to a high quality regular oil (Delo 400) at a mechanics' recommendation.

Around 5 years ago my '97 Audi, which I had run from the first oil change with Mobile-1, had 2 of the lifters go quite badly, in what I'd consider a lubrication-related failure. Here is a picture: 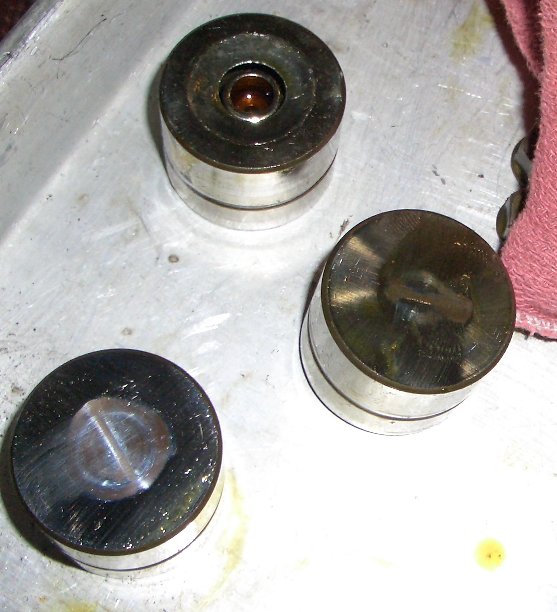 Now, maybe this was a design problem, but I haven't heard of it being common on these engines. SO my take on it is that, in my admittedly small sample size, the only lubrication-related failure I've ever had has been on the car I ran Mobil-1 in from the first oil change.

So, I won't run Mobil-1 in my cars, and I'm mostly skeptical of it's competitors.

I'm now running the Delo 400 traditional oil in my Audi that had the lifter problems -- around 100K miles since the lifter replacement and no problems. In my other car, it takes some fairly unusual weight, and recommends synthetic, so I'm running Red Line in there, at around $10/qt. Lucky for me it "only" takes 8 quarts for an oil change :-). But, it's an expensive engine, with 40 valves, so I think it's worth the "good stuff".

In my transaxles, I've been extremely happy with Red Line, so I'm trying it in this engine.

Such a question can only be asked in regard to specific makes and models. There is no yes/no answer to this in the general context. Some older engines benefit from switching to synthetic, while others suffer from it. FWIW, I've not yet seen a manufacturer recommend a full synthetic for older cars, only blends.

Today I actually was discussing this topic with a relative of mine who used to be very into hot rods and such, and he said that as far as synthetic oil goes in gunk cleanup, it probably won't do much harm. He said that typically the only way you would have detergent strong enough to wear away the seals is if you were using engine flush (which is something you never should have done to a car regardless of age).

As for synthetic blend oil, I read in Edmund's awhile back that in terms of the formulas, there's no law saying what constitutes a "blend" meaning that as long as there's at least 1% synthetic oil, the companies are able to label it as a blend over conventional. Still, the article said that blends typically might be 10%-20% synthetic however the markup is so high, that you're better off going with full synthetic if you really think it's necessary.

Not the answer you're looking for? Browse other questions tagged oil or ask your own question.