Do cars consume less gasoline when the tank is full?

No. If anything you'll get worse gas mileage with a full tank because you're carrying a heavier load (more fuel = more weight).

What you are most likely experiencing is the top half of the tank is larger than the bottom half (in general terms). In other words, the sending unit (float level) in the gas tank most likely takes longer to traverse the top 1/2 then it does to traverse the bottom 1/2. This would make it appear you are getting better gas mileage on the top, because there is more gas in that top 1/2 than there is in the bottom.

EDIT: Criggie said in comments what I was trying to point out. When I say "top 1/2" and "bottom 1/2", I'm talking about what the gauge is reading. Not the actual 1/2 of the tank itself. This is in direct comment to what Fake Name stated about being nitpicky, as they are exactly right.

The best way to determine the actual fuel consumption is to brim the tank, drive till nearly empty then brim the tank again.

Then you have an exact volume of fuel and a specific distance.

Repeat over three or four tanks and you will have an accurate fuel consumption figure based on your actual use.

The gauge is not linear in performance and not designed to be accurate - it is an indicator. Many gauges will gain or lose a bit on bends or going up, or down, hill. One thing that is done to hide this is to make the gauge slow to respond... Owners' manuals usually cover this by saying fill up at ¼ tank.

Also as pointed out in another answer the tanks are not designed with constant area through the depth of the tank. One reason is to avoid sloshing of fuel and picking up air; the other is that the space for the tank usually has to accommodate drive shafts or exhaust pipes etc.

However, none of those can be true. The tank shape depends on its location, sharing space with other components. The gauge sender and gauge itself are rudimentary, electrically, and notoriously inaccurate. The float in the tank reaches its highest point before the tank is full. That last point is the red herring. The float stays in its highest position for longer, as it cannot drop lower until some fuel has been used.

So, it appears that the gauge becomes more pessimistic once the tank is only 'half full' - which in reality is often closer to 45% full.

You are being fooled by the psychology used by car manufacturers, who've discovered that A - if the gas indicator doesn't move for a while after a full tank, it makes the driver think the car is more economic than it is and B - if empty means empty, a lot of idiots will get themselves stranded.

With modern technology, we have the ability to tell exactly how much gas is left, but we don’t. Engineer Phil Pierron, talking to Autoblog, said that customers, through surveys, have told automakers that we don’t actually want to run out of gas when they hit “E” — apparently, we like having the reserve so we can panic and drive gingerly to the closest gas station.

Similarly, it apparently makes us feel good to have the needle sit on “F” for longer. Partly this is because it gives us the illusion that we are either getting better gas mileage. However, it also makes you feel like you aren’t immediately burning through that tank of gas you just shelled out 40 bucks for (even though you totally are).

Your feelings are valid so if it makes you feel better then continue doing so. That feeling is going vary from car to car and from person to person.

However, science would dictate that a heavier car causes worse fuel economy but whether or not you'll notice a savings of .2 miles per gallon is directly related to how you track that data and your consistency in doing so.

I felt that keeping a full tank of gas is beneficial over the long run.

You can't get better MPG with a full tank. The engine simply cannot use gaseous fuel. It must be liquid or the injectors cannot correctly meter.

The top half is larger due to "Unusable Fuel"

Open up a modern fuel tank and you'll find an electric pump in there. It creates high-pressure fuel (300 KPA/45 PSI or so) to supply the fuel injectors. You'll also find some funny baffles around the pump inlet. These make it impossible to use the very last fuel in the tank. This is, in aviation terms, "Unusable Fuel".

That does a couple of things for you: it keeps crud and (heavier) water out of your fuel injectors and pump. The pump needs fuel to cool and lubricate; it'll be destroyed running dry so it makes sure there is fuel for that. 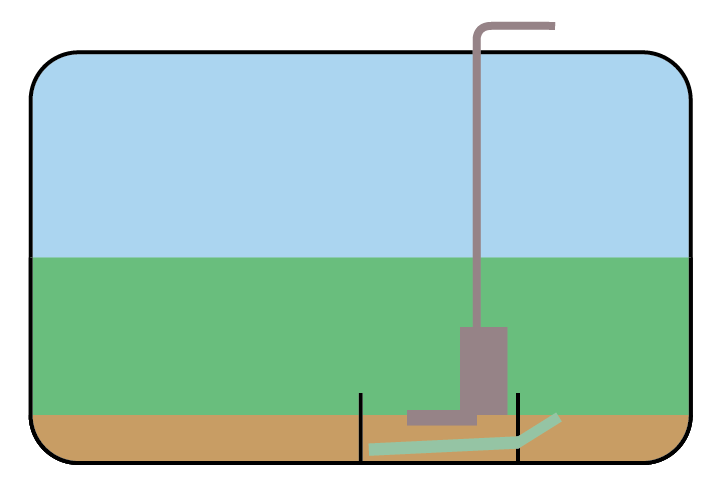 In this illustration, the green/blue border is the true 50% mark on the tank. But the brown (unusable) area impinges on the green (bottom half) area, making the upper half larger.

Of course, a real tank's shape will also be irregular due to needing to clear vehicle components. The empty/full gauge isn't sophisticated enough to account for these variations (or parking slope)... so on some cars that too will affect things.

They generally aim to have "E" be at the "unusuable fuel" line. There's a little bit of margin on unusable fuel due to splash and slosh: fuel can sometimes get over the baffles to a degree.

Despite the number of answers "confirming" no, I'm going to provide some outside sources that indeed show you're correct, or at least in some situations you can be - although it's not to discredit the points made, and the difference in reality is negligible, in either direction.

There are several factors that affect your gas mileage based on how full your gas tank is. This includes, but not limited to:

Some will argue that because the gas tank is lighter when its low, a low tank will give the car more fuel efficiency. A lighter load does require less gasoline, but the weight of a full fuel tank is not significant. A gallon of gasoline weighs only 6.3 lbs. (for reference milk weighs 8.6 lbs. per gallon), so even in most large vehicles the total weight of a full tank is under 250 lbs. Your car may actually be less efficient when the tank is near-empty, as more air in the tank can increase fuel evaporation.

And also this Quora answer:

In theory yes but, in practice it could actual hurt your mileage.

The reason is that the fuel will slosh and can get into a rhythm that actual makes your engine work harder. Ask any trucker or farmer that hauls liquid, a full tank is easier to move than a partly full tank that is sloshing.

I'm not going to go into the opposite point as it's been well discussed, and certainly carrying less weight does increase your gas mileage. But compared to the weight of a car, a half tank of gas is well... effectively nothing. Just like the loss from evaporation or the fuel sloshing about is effectively nothing.

I think the important thing is that each of these differences, whether in favor of better gas mileage with a full tank of a half tank, are negligible

It's kind of like driving around looking for a better price on gas, you'll waste enough gas looking you won't save any money - you're better off putting your attention elsewhere.

The first link I provided gives other reasons it is beneficial to keep a full tank, and I typically fall into this line of thinking, but again, in general it's not worth the concern either way. Just don't hit empty.

Yes, Your car will operate normal with a full tank and not less. If you have less gas in the tank it takes more electrical energy to pump the gas to the front therefore there will be a quicker evap. and more gas used. Ever notice how long it takes for the gas gage to go down from full to half and quicker after a half tank.

Not the answer you're looking for? Browse other questions tagged gasoline fuel-tank or ask your own question.

21
Should I really keep my gas tank at least half full?

7
Can't fill car up with gas
1
Mystery White / Gray Dust on Motorcycle Gas Cap
0
My truck won't start when the weather gets warmer
21
Should I really keep my gas tank at least half full?
2
Effects of using diesel fuel in a gasoline engine
2
OBS Ford fuel quantity discrepancy