Is this behavior normal in a long uphill road at 102 degrees Fahrenheit?

Please read this carefully before posting comments or answers. This is NOT an overheating issue. It is just about cooling system behavior under specific conditions.

Today, I was driving up an uphill highway for 20 minutes (in 4th gear) and the outside temperature was about 39 degrees Celsius (102 degrees Fahrenheit). I noticed the temp gauge reached about 96 °C (when low speed mode turns on). I continued driving uphill and the temp showed 97 and even 98 °C. It didn't go higher and stayed there (between 97-98) and started to go lower (between 93-94) when the slope of the road decreased a little bit.

Why couldn't the fans bring the temperature back to 93 °C when I was climbing the steep road? Is it normal that cooling fans operate but they only manage to keep a steady engine temperature in a steep road? In most cases when low speed fans kick in, they lower engine temp but today this didn't happen. Why? 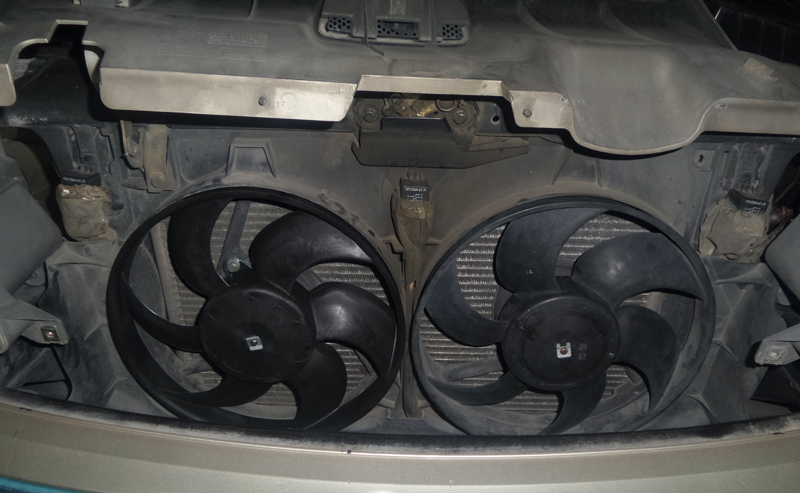 Yes, this is normal behavior.

You wrote 'When fans turn on, they have to bring the temp down and turn off and this cycle should go on and on...'

That is not completely accurate. There is a set upper temperature limit and a set lower limit for each fan speed mode. When the temp hits the upper temp limit for the low speed fan operation, the fans will turn on as you know. At this point, most times you will see the temp drop as the fan speed is such that it draws enough air flow to lower the temp and then when the temp reaches the set lower limit, the fans turn off.

The fans are supposed to CONTROL the engine temperature, but they aren't very sophisticated in operation. So, in normal driving conditions if the engine gets a bit hot and low speed fans turn on, you will see the temp drop and the fans turn off IF the fans are able to overcome the amount of heat generated by the engine. If engine effort is maintained then of course the temp will rise again and the cycle will continue.

However, the fan design is such that it draws air at a certain rate. Low speed draws less air than high speed. When you were climbing the hill and the engine was generating more heat than usual, the low speed operation of the fans turned on as the temp reached the upper threshold. The rate at which the fans drew in air at that speed (combined with the natural air flow as the vehicle moved forward) essentially shed the engine heat at roughly the same rate as it was able to generate the excess heat.

This is why the temp maintained a steady, higher than normal temp.

Not the answer you're looking for? Browse other questions tagged engine temperature cooling or ask your own question.

3
Engine Heat Indicator effects
5
Problem with Temperature rising after 30 minutes of driving?
6
Thermostatic Cooling Fans
14
Is it possible for a diesel engine computer to detect (and prevent) a runaway condition?
3
Can improper coolant concentration increase coolant temperature?
9
How long should I wait for engine to cool down before I can check coolant?
1
Possible overheat
0
Engine took a long time to warm up after putting chemical coolant flush in coolant reservoir