Quick question, when trying to remove a stubborn bolt by hand with an hex spanner is it better to apply a constant force, sudden "strikes" or it doesn't matter to avoid stripping it?

EDIT: I'm sorry for writing a really vague question (not on purpose, I'm not really sure about the English terminology hence the possible confusion), by stripping the bolt I mean avoiding stripping the head. If it can help I asked myself this question when I accidentally stripped the oil pan plug head on my offroad motorcycle (aluminum hex head fastened on steel oil pan with crush washer in between). I tried loosening the hex plug with a correct size and high quality hex spanner (not exactly one like this but the hole it's the same, it's from a very reputable make, I'm not even sure where I would find imperial sizes here and I checked on the manual the size needed) 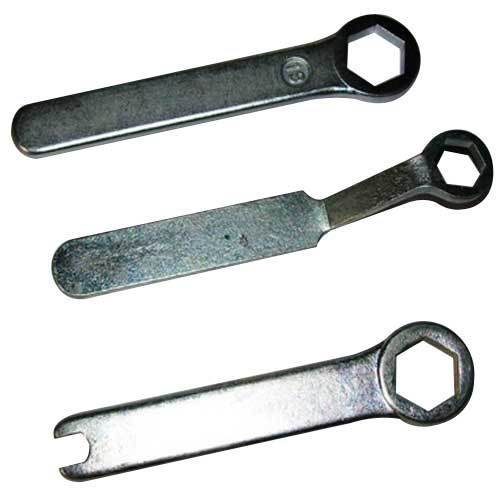 My question is: Considering only hand tools (so no impact drills or the sorts) to minimize the chance of stripping the head is it better to apply a constant force or quick and powerful "hits" (not with a hammer but let's say "loading" your arm forward and then quickly pulling it back if that makes sense)

In dealing with rusted/corroded bolts and nuts, it is helpful to understand the materials involved. Rust, or in general oxides of metals, are harder than the underlying metal. A good example is aluminum, a very soft base metal, but when oxidized is used for common sandpaper. The oxides are not only hard, but they are brittle and shatter into smaller, but often sharp smaller pieces.

So using a penetrant (oil, hot wax, even water) helps in that it carries the sharp particles away in a slurry, and helps prevent their sharp little edges from biting into other things and stop motion.

In general, I use two methods on rusted and stubborn fasteners. Mechanical and thermal. Well, thermal is really a modified mechanical, but I will explain that later.

In the simplest example of a rusted nut on a bolt, one tries to apply a penetrant oil, let it soak in, and then apply some more. The penetrant does not break up rust on it's own. Then at a later time, torque is applied through a wrench, and if the planets are properly aligned the nut will spin off the bolt. Smooth torque can work, BUT torque combined with some shock helps. Because the shock shatters the matrix of the hard oxides. To using a wrench, and hitting the bolt/nut with a hammer goes a long way is breaking up the oxides. This is why impact tools that tire shops use work so well on lug nuts. They shatter the rust matrix, and provide varying torque which helps release the matrix of rust particles. But even if you don't have impact tools, tapping on the nut can help it free up. So can moving it both ways. That motion helps release "ratcheting" rust particles, and encourages them to not bite in further, but rather to release, perhaps get crushed into smaller particles and flow away from the metal interfaces.

Thermal is mostly mechanical, but for steel it works well. Using the example of a bolt and a nut rusted, I would apply heat to the bolt, on the inside of the nut. (Using a fine torch tip, usually on an oxy-acetylene torch.) The heat expands the bolt, within the nut. The bolt is hotter than the nut and expands more, and the nut contains the expansion, causing force on the rust interface. That crushes the brittle oxides of metal. As the assembly is cooling, wiggle your wrench back and forth a bit to help crush up the oxides more.

This is just intended to be an introduction to the physics of what is going on, and help visualize the process of loosening rusted fasteners.

In my home shop, I mostly use air impact tools (electric ones are fine, I just have mostly air ones) and oxyacetylene torch. I also sometimes use an induction heater on rusty farm equipment, but I don't recommend that as a tool for most at-home mechanics. If I can't get impact with some oil to free things up, I will often apply heat from the oxyacetylene torch. However, keep in mind that the heat will change the metal properties, and if one uses heat, fasteners (think shock mounts) should be replaced with new ones. With many manufacturers using torque to yield fasteners, that may be the case for many fasteners on automobiles.

First buy yourself a set of 6 point sockets. The box wrenches shown are minimum capability and even look thin for box wrenches . Although good box wrenches ( significantly thicker than shown ) are often used for serious nuts ( like one inch plus) with a "cheater" pipe handle as long as possible and maybe a small sledge . Shaped charges are a last resort for very large tight nuts.

Not the answer you're looking for? Browse other questions tagged stuck-bolt wrench or ask your own question.

5
Removing badly rusted and broken bolt from suspension
4
Removing difficult engine bolts
3
Undoing a rounded-off triple-square bolt
10
Thread on bolt - what happened?
4
Removing rounded allen dome bolt
3
Removing stuck bolts- manual ratchet vs. pneumatic impact ratchet
2
Does it help to hit a stuck bolt with a hammer before removing it?
8
How can I get this broken oil drain cover off?
5
What is the disadvantage of using impact sockets on a hand wrench?