How should I remove this corroded nut without rounding it?

I have a 1982 Porsche 911 and need to remove the heat exchanger on one side. It's held on with three 13mm nuts and 3 barrel nuts. The barrel nuts were no problem, but two of the 13mm nuts are so corroded that the 13mm wrench doesn't fit them and a 12mm is slightly too small. These are hard to get to, so I only want to do this once. What's the best way to attack these without rounding them and making this an even harder problem? 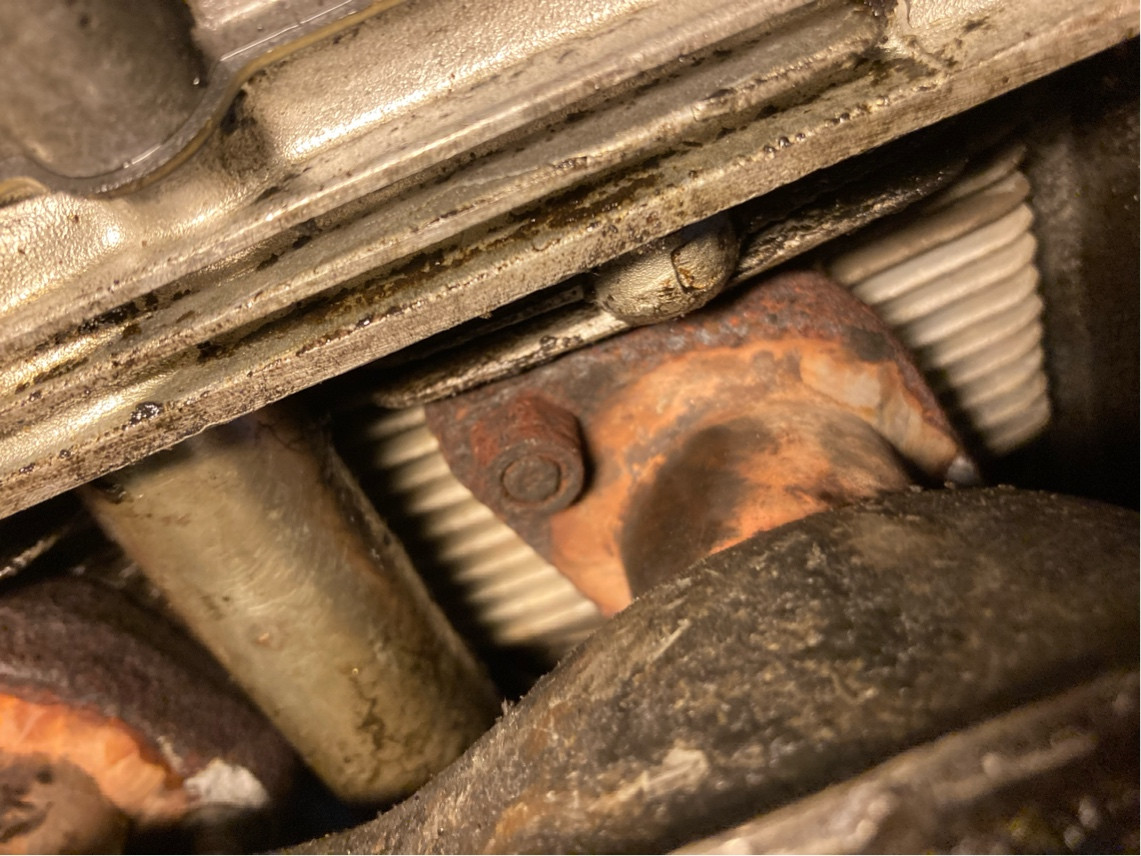 Also I should mention that the way to reach them is with a 75 degree offset box wrench; I can't get a socket on them. I have also soaked them with PB Blaster.

Thanks to you all for your many good suggestions, but I thought I'd share how I actually got these nuts off today. First, more PB Blaster, and then while I was at the auto parts store getting parts for another project, I spotted these and decided to try them: 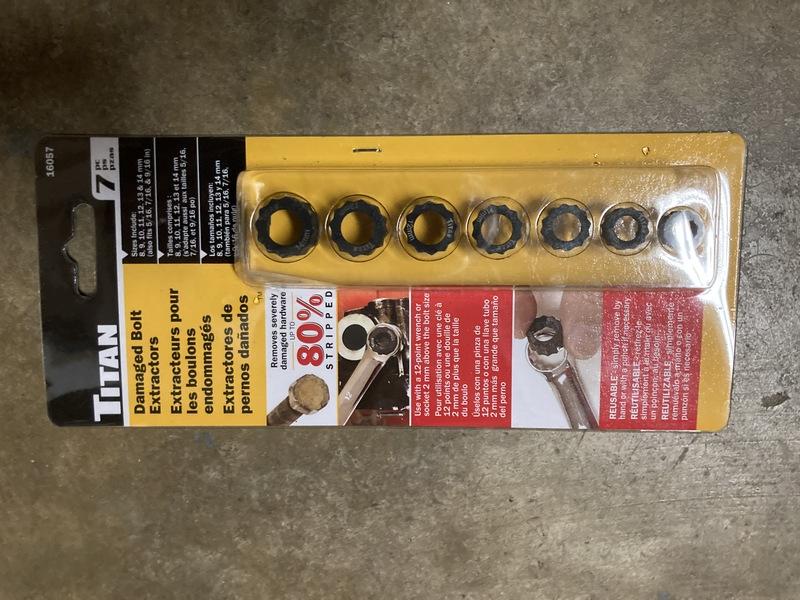 On the package they say "Reusable" but on the store's web site they say "Disposable" so my hopes weren't really high. However, I used it and it did the trick. Essentially, it's a 6-point adapter that fits into a 12-point box-end wrench 2mm larger than the target size. So for my 13mm bolt, I used a 15mm wrench. It's sufficiently low profile that it was able to fit where more conventional extractors probably wouldn't. 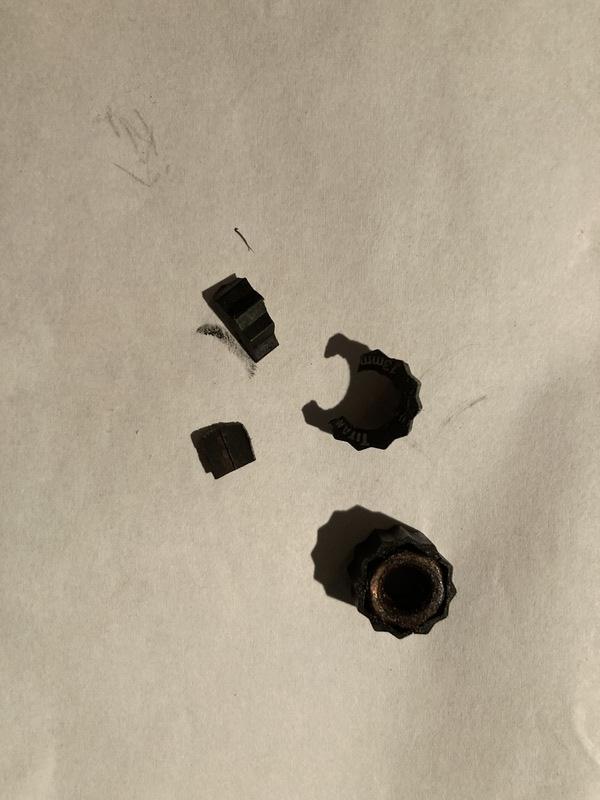 I tried the first one and was elated when it actually broke the nut free, so I tried it on the second one, where it promptly cracked into pieces. Still, it seemed to me to be worth the $10 that I paid for the set, so I went back to the store and bought another set. As you can see from the picture above, the second nut was also removed and was tightly lodged in the extractor. I was able to remove the nut eventually, but there is now a significant crack in the side of the extractor, which leads me to conclude that I haven't many uses left with this one. 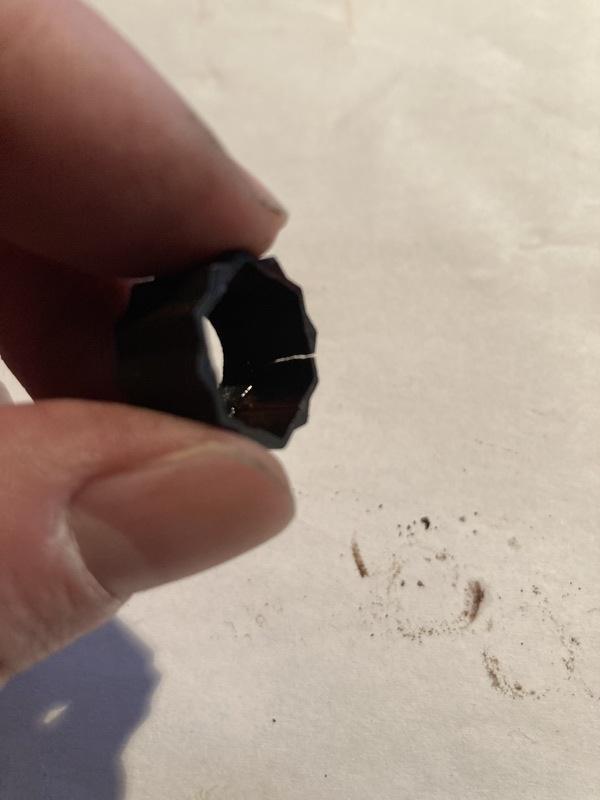 So my conclusion is that these are better thought of as "disposable" than "reusable" although some reuse is probably possible. Copious amounts of penetrating oil and the German opera on the radio probably both helped, but the tool did what I needed and I consider the price worth the avoided headaches of alternative means.

A lot of localised heat to the nut will help.

A 1/2 inch spanner/wrench is slightly smaller than a 13mm, so that may still work after heating.

If you can’t get a splitter on it, you could drill a line of holes into one side of the nut and chisel it off. The holes may also release some of the tension and allow it to turn.

I have used an air chisel on the edge of a stubborn nut to get it to turn on a number of occasions.

Weld a new nut on top of the old nut. The heat will help and then you have a good nut to turn with a spanner/wrench.

As you don't care about saving the nut you have a few options. In addition to the good solutions mentioned in other answers I have a few suggestions:

As you've noted, you can't get a socket over the nut, which eliminates a large number of tools with sharp internals that resemble a socket.

Not many options remain, but one of them is a nut splitter.

Summit Racing Equipment sells a nut splitter with an open arc. Many other nut splitters are enclosed circles, also resembling a socket, but the open arc allows you to approach the nut from one side. 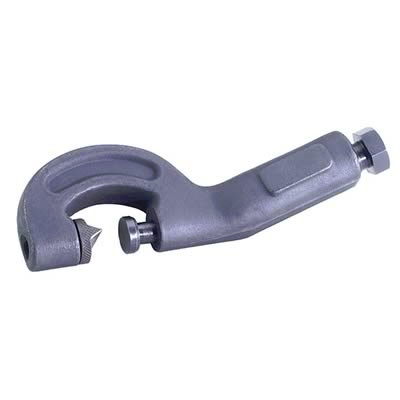 There are other sources for similar tools, this was selected for clarity of the image.

I needed to remove a nut on my son's exhaust where the nut/stud were so corroded and rusted there was no way to get them off. For one of them, I used a cut off wheel, which worked out pretty well, but the second one was in a place which was inaccessible to a 4.5" disk. I first grabbed my hammer and chisel, which didn't do much mainly because of the angle. I then remembered I had an air impact hammer. I grabbed it and the bit for it. I realized it didn't have much of an edge on it, so I touched it up with a wheel grinder, then applied it to the task. Took less than two seconds to split the nut off of the stud. I was amazed it worked that quickly. It worked much like what a nut splitter would work, only about 20x faster. Just a short blip with the air and it was done. A very handy tool to have in the ascenal.

As an experienced motor vehicle welder, I can assure you that any rusted nut and bolt, no matter how corroded, is easily removed by heating the nut with an oxy-acetyline torch until it's glowing red. This anneals the steel, making the thread slip easily.

Another option is to weld a bar to the nut.

You will find that heat can be applied to the nut without the bolt/stud getting as hot.

They will be so loose you can easily turn with pliers although I'd use a spanner, socket or vice grips.

This should be qualified by the fact that you must take care not to burn, melt or heat-crack surrounding items. In particular, in your instance it looks like there might be some aluminium alloy nearby which you could easily destroy with a welding torch.

You should replace the nut afterwards (and the stud if it gets hot enough to anneal it) since they will no longer have their original hardness rating.

After seeing your solution to your problem, and that you really just needed a 6 point hex rather than a 12 point. I think you would be far better investing in a hex ratchet spanner/wrench like this one from a set I have - 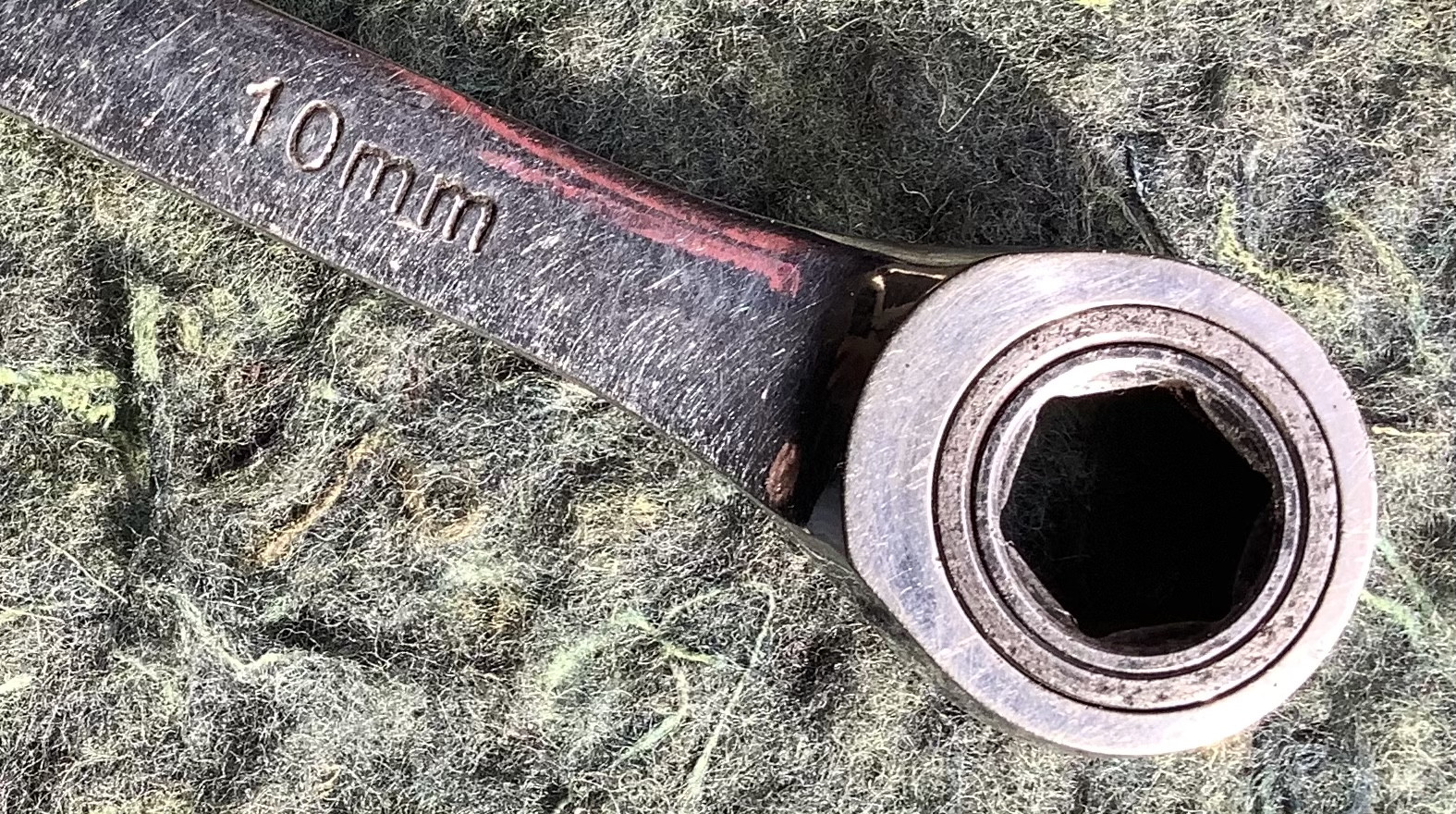 I bought them individually and you could probably buy one for less than the price of those adaptors and they will last a lot longer.

Because they have a very fine ratchet, you can operate them in a very small space. You can even get them with a hinge mechanism on the head to get access at awkward angles.

Another way to get something red-hot is an induction heater, the popular brands are Bolt Buster and Mini-Ductor, and there are eBay etc. knock-offs as well. It's on my list for a few reasons:

Side note: based on this, you might also want to try Liquid Wrench or ATF/Acetone mix on the next one: https://www.youtube.com/watch?v=xUEob2oAKVs

Not the answer you're looking for? Browse other questions tagged exhaust porsche nut 911 or ask your own question.

3
How should I diagnose an exhaust "howl" when descending through 3200 rpms?
8
Cant Remove Nut on Clutch
6
How to deal with this type of nut
3
How to remove broken bolt with screw extractor from exhaust manifold
3
Sheared off exhasut pipe: How to fix without a welder?
2
need to remove a broken lug nut: thinking die grinder?
2
How to unscrew a stuck screw from a U-style spring nut?