Fixing a mistake in my paint job 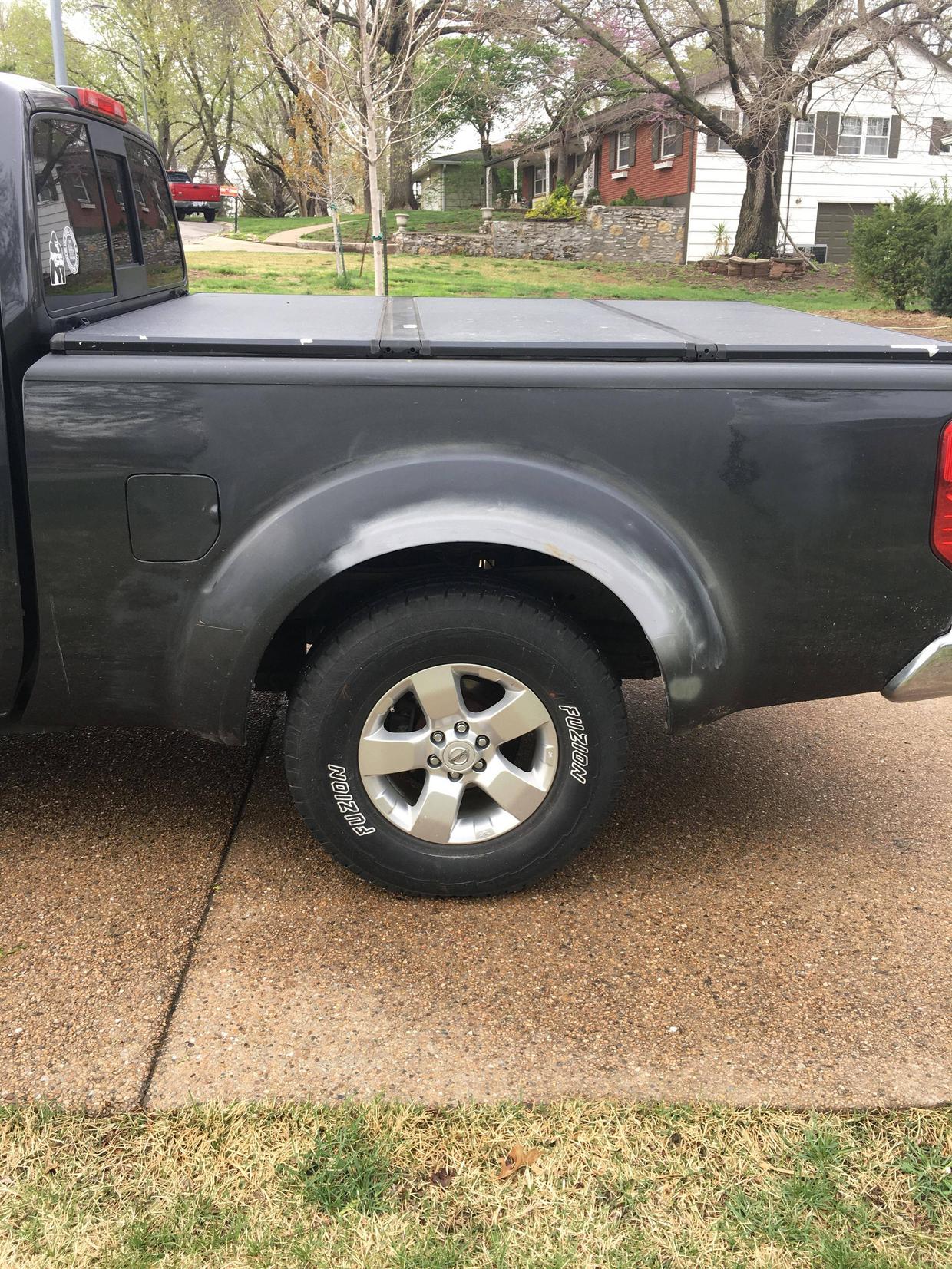 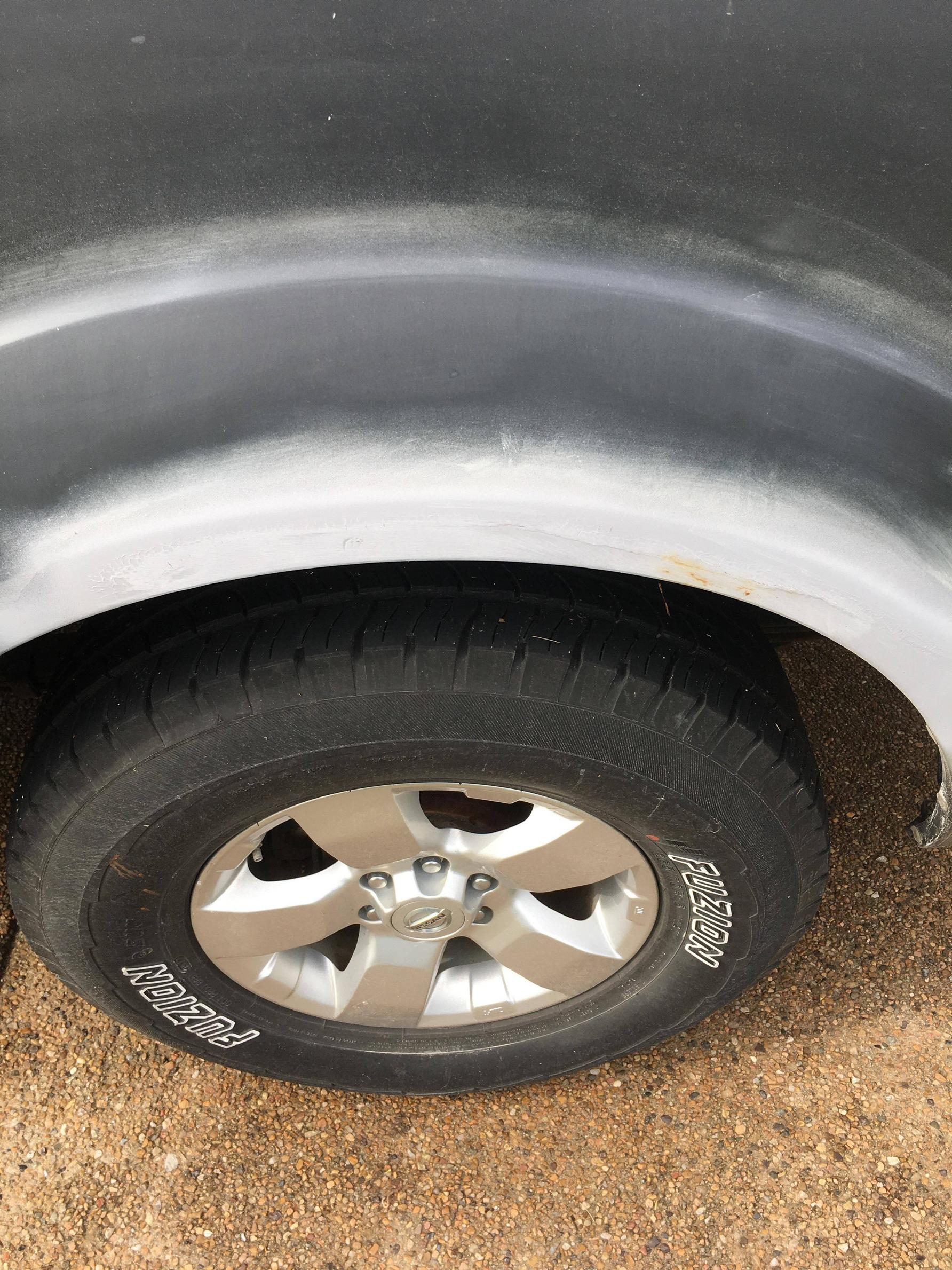 I have a 2010 Nissan Frontier that has all sorts of scrapes, scratches, and dents on it. Some of those have progressed to rust, and a few months back, I noticed that one spot over the drivers side bed wheel well had even started to bubble paint.

Having a free weekend with decent (for February in KCMO) weather, I decided to address the problem in my garage. I brushed and sanded the area down to bare metal and found that the rust spots were probably no bigger than the tip of a ball point pen, but were spread out enough that I sanded a larger area. I used a bit of spot filler on the rust spots, a layer of metal primer, then a few layers of filler primer (metal and filler primer both made by Rust-Olem) on top of that. Once those were dry, I sanded and blended, and started applying color coats, which were Color-Rite aerosol (https://www.amazon.com/gp/product/B00GVOH4RQ/ref=ppx_yo_dt_b_asin_title_o04_s00?ie=UTF8&psc=1). I then applied a clear coat that came with the color coats in the link.

So far, so good. I feathered out over a fairly wide area, about up to the plastic bed rail cover, and waited until the next weekend to start sanding. I originally started with 1500 grit on a sanding block and kept it wet. I wasn't making the progress I wanted to in a decent amount of time, so I switched up to 1000 grit.

So this is where I get stupid (or stupider, maybe?). I apparently didn't put down as many layers of color and clear right over the lip of the wheel well as I had the areas above it. I think you can see where this is going. I noticed that I had sanded through the clear AND color coat on the wheel well lip. Panicking, I reached for color coat. It almost instantly wrinkled. To say I was mad at myself is an understatement. It was getting late on a Sunday night, and I had trashed my paint job. I removed what remained of the paint on the lip and sprayed primer over it so it wouldn't be bare metal. And... well, that wrinkled too, as you can see in the photos. Some overspray landed on the paint above the wheel well. There also appears to be rust forming under the primer now.

How do I dig myself out of this mess? I know I'm going to have to remove the primer layer and the rust underneath it. I have some Loctite Naval Jelly that can remove surface rust, and as for the original small spots of deeper rust, I intend to drill that out and fill it with bondo. My main question is, how far should I go in removing the color and clear coat that are above and to the sides of the wheel well so that new color and clear (which are of the same brand as the original) can be applied?

This is a truck I use for moving furniture, lawn equipment, logs, etc. and is a winter vehicle in a Midwestern city that sees salt. I don't need it to be a show-car job, but I'd like to not do more damage.

8
How do I finish my DIY, single-stage paint job to a gloss?
1
DIY paint touch-up on rusted fender: paint touch-up kit includes primer, color, and clear coat
1
Car touch-up paint… HELP!
1
Why can't I match car color even after six coats of the same color code paint?
0
Do I need to sand old clear coat to apply primer for new paint?