In an ingenious way to solve the never ending parking problem, a car with swiveling front wheels was engineered/designed/manufactured; see video clip in link 1927 clip

I've no idea on the car but I'd take a stab at how it works.. I think it probably has two steering racks, one atop the other. Each rack connects to only one wheel. In normal use, the racks are separated and locked together and the pinion drives them both in the same direction so rotating the wheel clockwise points both wheels to the right. In parking mode, the racks are brought closer and unlocked in such a way that they are both in contact with the pinion and free to move in opposite directions. Turning the steering wheel increases or decreases the amount of toe in as the racks move in opposite directions 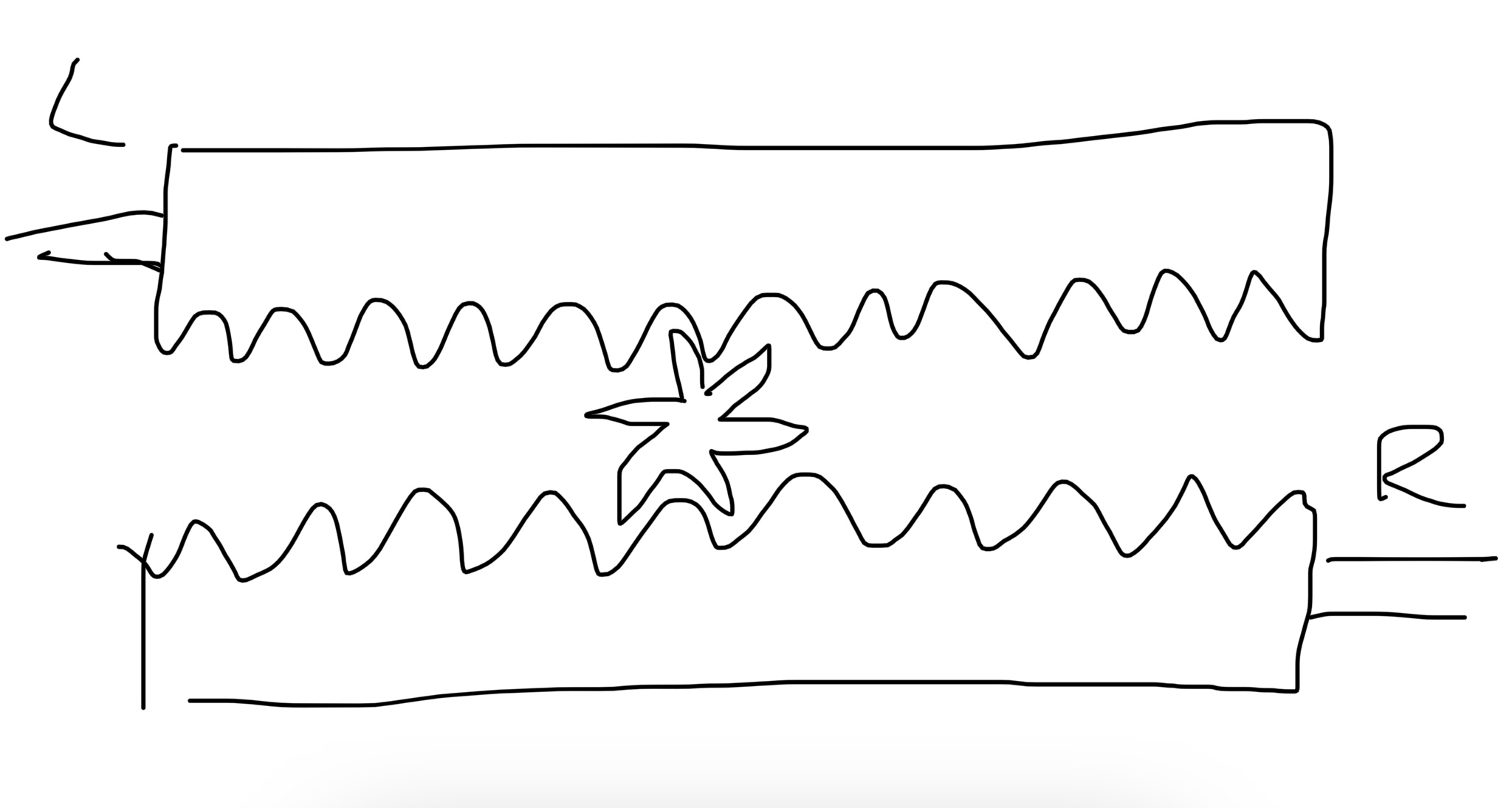 Imagine the central pinion gear moving counter clockwise: the racks will move apart. Now imagine pushing a toothed wedge into each side, forcing the top rack up and away from the pinion, and the teeth on the wedge locking into each rack.. now the whole assembly moves according to what the pinion does to the bottom rack only

Probably also worth mentioning that in that video I suspect there will have been something else going on, with the differential or elsewhere. There is no overall force in any direction for two front wheels rotated so they are perpendicular to the imaginary line from rear diff to front wheel center so you can't get a car to spin by driving the diff normally. You'd have to lock it up such that when driven, one of the rear wheels rotates forwards and the other in reverse. You'd choose which wheels to rotate which way (and by consequence, the rotational direction of the whole car) by using forwards and reverse. This would cause the car to rotate in the road, around a point roughly where the diff is. The entire system would be quite a complex affair I dare say, and you wouldn't see this arrangement on a front wheel drive car because getting around the problem that a cv joint cannot transmit power through that angle would be a very costly exercise.. I can see why such a system would not take off, commercially, because it doesn't seem worth going to that level of effort to solve the "parking problem" when the drivetrain and steering components can be simplified and getting into a tight space can be achieved with several back and forth shuffles. Yes, it means you can get into slightly tighter spaces more easily, but if you're willing to put the effort in you can get into a space about a foot longer than a car with the present system, and if people would be less precious about their cars and do as the Italians do (leave the parking brake off so entire lines of cars can be barged out of the way to make room) it becomes moot

These days this would be easiest to do with electric front wheel drive I reckon, where the motors could be rotated thus and power the front wheels to turn, dragging the front of the car round. It would get easier with full wheel drive if all the wheels rotated, then the car could slide sideways into a space but by and large it's again a level of engineering effort that is unnecessary- my mother's Kia parks itself, after scanning the street for a space it can get into it instructs the driver to engage reverse, it turns the wheel itself and parks itself perfectly in a single back/forwards movement - this problem is being solved in other ways (but really needs solving by "fewer cars on the road")

Not the answer you're looking for? Browse other questions tagged wheels steering or ask your own question.

0
How can I reset the steering wheel airbag warning light
11
How can you change a pressed wheel bearing without a hydraulic press?
2
Installing clip on bars, limited space available. Will an adhesive be neccesary?
2
Why not use a standard hose clamp instead of OEM one-time use clip?
2
New Tires, car shaking/bouncing at high speeds
0
What can cause loose steering other than alignment and tyres?
1
Roadside wheel change metal d clip