Is the rear wheel supposed to spin like this?

I’m new to this community and I’m a noob in terms of knowledge about motorcycles, so please ignore my ignorance.

I own a Yamaha MT15, which has run 550 KMs so far, 2 months old. About a week ago I did water wash and lubed the chain. Even before that I had given the bike for first service, and they adjusted the clutch without asking me. I rode for couple of days and didn't like the adjustment and they reverted it back.

After the first service and the recent wash, the performance has gone low. The engine works a lot but delivering less power and speed. The throttle response has also become very poor on comparing to when it was new. I suspect that the rear wheel is too tight, and the spin is also not free while on neutral, and so the reason behind poor performance. And it takes some effort for me to spin the wheel. Pls see video at the bottom for understanding.

I went to the service centre and asked them to check the rear disc brake. They checked and said it’s fine, but I doubt that. Also they said that the wheel spinning is also normal because it is spinning with the sprocket and chain. I mean, even though it’s connected to the sprocket, the wheel should at least spin more than 3 revolutions right? It’s barely completing 1 revolution.

Is this wheel spinning normal or is it too tight? Is there anything else that might be causing this performance dip? Might it be the clutch, chain? I don't have any idea. Thanks for your answers and suggestions. 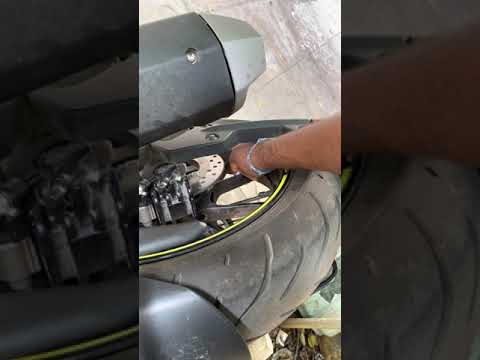 A rear wheel, connected to the drive train, and in neutral will spin like that. There are a lot of dragging forces acting on the rear wheel and it will not spin freely.

I can't hear from your video if the brake caliper is dragging but the behaviour of that wheel looks to be entirely normal.

Based on the reference to adjusting the clutch, consider that if the clutch is not fully disengaged, the power produced by the engine will not be transmitted to the rear wheel in an efficient manner. Some of the power will be absorbed by the partially-engaged clutch material (similar to brake pad material) and eventually will wear away to the point of requiring replacement.

The "engine works a lot but delivering less power" is consistent with the previous paragraph.

Consider to try the following: with the engine running, engage the clutch and shift into gear. Use the brake to prevent movement of the motorcycle while you slowly release the clutch. If the engine slows at the same rate of the clutch release but does not seem to overpower the brakes, it is another indication of a slipping clutch.

There should be some free play in the clutch lever. As you begin to squeeze the lever, the clutch should disengage to the point where it is fully disengaged and there should be no wheel movement. You can test this by placing the motorcycle on a stand to free the wheel.

While on the stand, consider to engage the first gear (in the normal manner) to allow the rear wheel to spin. As you apply the brake for the wheel, the engine should "load up" and change rpm and sound and should also stall. If it does not, the clutch is slipping and should be re-adjusted.

Not the answer you're looking for? Browse other questions tagged motorcycle wheels brake-rotor yamaha disk-brakes or ask your own question.

4
Motorcycle chain degreasing
4
Rear wheel wobble
3
Why does my front wheel rotor is heating up more than rear one?
6
Motorbike chain tight when in gear pushed forward but loose when rolled backward
1
Low whir when moving on my motorcycle
2
rear wheel spin on motorcycle