Oil Level In Dipstick After 600 Km journey. Normal oil level change or not?

I have recently bought a used 2004 Toyota Camry Altise with 180,000 miles on it. Mechanically sound and no oil leaks at all. I have recently completed a 600 km journey today and have noted down my before and after oil level on my dipstick. Due to bad experience in the past with other vehicles concerning oil, I have some questions. I have attached two pictures of my before and after journey oil level in my dipstick. There has been some oil consumption, my question is if this level of oil consumption normal or if there is any problem with it? 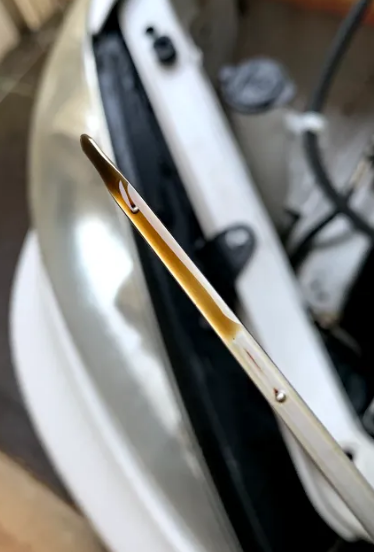 Any advise/opinions are highly appreciated! Cheers.

If you checked the oil when the engine was hot and followed the practice of dipping, wiping, then dipping again after the engine was off for a few minutes then you have an accurate reading and it looks like you are definitely losing oil. If you aren't being consistent then you may have inaccurate readings and you should test consistently before making any determinations.

As for the question is it normal, a noticeable oil loss in 600km of driving is excessive, although that's pretty common in high mileage cars. However, even if it's normal to have oil consumption in a high mileage car it doesn't mean it's something you want to live with, because high oil consumption in any car is the sign of a problem. So the question you should be asking is what the potential problems may be. When you have a car that is that high mileage you need to find out whether it's something that is potentially catastrophic, where the engine could suddenly lose all its oil and seize up, or whether it's just going to ooze until it's taken to the junkyard. If it's the former you have to make the call whether to spend money on it or take the risk, if it's the latter you can make a decision whether to fix it or live with it depending on cost/eco consciousness/etc.

As for what could be causing it I have yet to see a 180k mile car that doesn't leak oil somewhere. Just because it doesn't drip when parked does not mean there isn't a leak, you'd need to investigate. If it's a bad gasket or seal somewhere it's often good news because they are often the cheapest things to fix. If it is worn piston rings then you may as well live with it as the cost of fixing it outweighs the value of the car, and it's not likely to fail dramatically.

That's not a list of all the potential reasons you are losing oil, this is more of an approach to the problem, which is find the source of the leak and determine what to do about it.